In 2008 five-time Tour de France winner Lance Armstrong announced that he was coming out of retirement and was training to return to professional bicycle racing. Director Alex Gibney (Taxi to the Dark Side, Enron: The Smartest Guys in the Room) was intrigued by the idea of chronicling Armstrong's attempt to win the Tour de France in 2009 after a four-year absence from competitive cycling. Armstrong agreed to cooperate and he allowed Gibney unprecedented access to his training, associates, and his cycling races. The documentary project was temporarily shelved when allegations were made that Armstrong engaged in doping during the 2009 Tour de France. Armstrong's career had been plagued by doping charges for many years, but he had always succeeded in casting doubt on the accusations, even though he was never able to completely refute them. When Armstrong publicly admitted to Oprah Winfrey that he had indeed use performance-enhancing drugs, Gibney prevailed upon him to explain on camera why he had lied for all those years. The result is The Armstrong Lie, a troubling account of the illegal and unethical lengths to which a world-class athlete went in order to gain an advantage over his competitors. 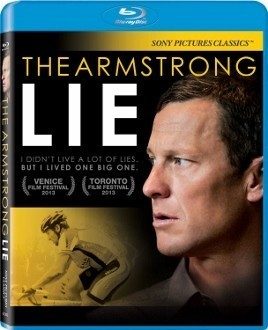 Once upon a time I worked for an inveterate liar. He made promises that he never intended to keep and repeatedly gave false accounts of what our clients were telling him. After I finally had enough and went to work for another company, he asked to meet him for lunch so we could resolve some issues about money which was owed to me. He proceeded to spin a tale which I knew was just another lie, but he did it so convincingly that I left the meeting almost believing what he had said. Watching Lance Armstrong lie about his doping reminded me of my former boss.One thing which remains a mystery is why Armstrong decided to come out of retirement and race in the 2009 Tour de France. He had successfully weathered repeated claims that he had succeeded with the assistance of doping. He had survived a life-threatening case of testicular cancer and had become a high-profile advocate and fundraiser for cancer treatment and research. Moreover, he was a wealthy man. There is reason to believe that he wanted to prove to himself that he could win the Tour de France without doping, but as it turned out it is likely that he never would have had to admit to doping if he had not come out of retirement.The Armstrong Lie provides an intimate and in-depth look at Armstrong, his associates, and his teammates. Prominent among them is the Italian physician and cycling coach Michele Ferrari, who in 2012 was given a lifetime sports ban by the United States Anti-Doping Agency (USADA) for the possession, trafficking, and administration of illegal doping agents. It is alleged that Ferrari not only oversaw Armstrong's doping, he also taught him how to beat drug tests. Ferrari used erythropoietin (EPO), testosterone and banned in-race blood transfusions to increase the stamina of cyclists.Others who play a prominent role in Armstrong’s downfall include his former teammate, Frankie Andreu, and Andreu's wife, Betsy. In 2006 the Andreus testified that they were present in 1996 when Armstrong told his oncologist that he had used EPO, human growth hormone and steroids. Also appearing in the film is George Hincapie, another former teammate of Armstrong, who says that he and Armstrong started using banned substances in 1995. In all, eleven of Armstrong’s former teammates testified that he used banned substances, including during his Tour de France victories.The film also focuses on the way Armstrong used his celebrity and wealth to attack his accusers, ruthlessly questioning their credibility and motives. The post-Oprah interviews with him are most revealing. Even while admitting his wrong-doing he insists that he did not think of it was cheating. He seems to be saying that everyone in cycling was doing it, so he was merely trying to avoid being at a disadvantage. Indeed, there seems to compelling evidence that doping was rampant in cycling and that the International Cycling Union was complicit in turning a blind eye to what was occurring.The Armstrong Lie benefits from some amazing in-race footage which puts the viewer right in the middle of the action. One does not have to be a fan of cycling to appreciate what a challenge the Tour de France is, although cycling aficionados will undoubtedly have a greater understanding of the sometimes puzzling strategy which is employed in such multi-state road races.While the basic facts of Lance Armstrong's lies are well-known to anyone what has watched or read the news reports, this documentary gives the viewer greater insight into his motivation and methods. It also is a fascinating portrait of a serial fabricator who does not seem to have grasped the fact that once you have been caught falsely crying “wolf” it is difficult to get anyone to believe anything you say.

With the exception of some archival footage, the 1.78:1 1080p image is strikingly sharp and detailed. As noted, Directory of Photograph Maryse Alberti has captured some unforgettable scenes which capture both the intensity of bicycle racing and the glorious surroundings as the cyclists compete in 21 stages which take them through six countries. One of the remarkable aspects is how close the cyclists come to spectators who line the road. It is amazing that more crashes do not occur, considering the degree of mental concentration which is required of each cyclist. Colors are consistently vibrant and accurate, and contrast is strong. Overall The Armstrong Lie is a pleasure to look at.

The English 5.1 DTS-HD MA soundtrack is very pleasing. Dialogue is center channel specific and is clear and intelligible throughout. A sometimes pulsing music soundtrack by composer David Kahne is very effective, and ambient sounds during the racing add to the feeling of immersion which the viewer feels during the racing footage.English and English SDH subtitles are available, as well as subtitles in seven other languages

The extras on this Blu-ray release are not plentiful but they are interesting.There is a revealing commentary track by Alex Gibney, who initially believed Lance Armstrong's denials and was rooting for him to win the 2009 Tour de France. He goes into detail about how his original project - following Armstrong's comeback to a hopefully triumphant victory - was shelved and came back to life after the cyclist's years of doping were revealed.Included is an informative Q&A session with a panel comprise of Gibney, producer Frank Marshall, cycling writer Bill Strickland, former Armstrong teammate Jonathan Vaughters, and Betsy Andreu.Also included are several deleted scenes, which have some interest but were understandably left out of the final cut.The Blu-ray also contains previews of the following films: The Invisible Woman, Wadjda, Blue Jasmine, The Patience Stone, Kill Your Darlings, and The Past.

It is not necessary to know anything about cycling in order to appreciate The Armstrong Lie, but it is probably fans of cycling who will have the greatest interest in owning it. However, cheating with performance enhancing drugs is hardly confined to cycling, so the lessons to be learned from watching the film are applicable to other sports as well. One wonders if Armstrong, in spite of his immense wealth and celebrity, was unable to fully enjoy his five Tour de France championships knowing that each victory was in part attributable to his doping. If so, there is more than a little irony in the fact that it was his comeback which led directly to his lifetime ban and public disgrace.It is worth noting that this film has inexplicably been rated R because it uses some language which is no worse than what I heard in the locker room when I was in high school. This is a film which should be seen by young athletes who may be contemplating the use of performance-enhancing drugs, but once again the MPAA has demonstrated that it is out of touch with reality.