A restoration could be done , using the existing master, restoring the missing footage as best as possible from the widescreen laser disc. Most fans of the film would excuse the lower quality passages just to get the complete film on Blu-ray. Don’t forget that Mad Mad World used a combination of stills and audio to give a complete as possible presentation.
If you are saying that The Alamo is too low brow for Criterion, that’s another story!
I was 12 years old when it was released, but I recall the film being well received as a major movie event. Now it’s looked down upon?

The Trailers From Hell with John Landis - "This is not a good movie, but it's kinda fun..." 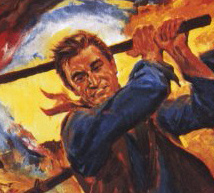 The Alamo | Trailers From Hell

“Republic. I like the sound of the word.” No, it’s not John Wayne talking about his former studio employers, but his directorial debut, the 70mm roadshow epic portrayal of the battle for Texas independence. Wayne lost a fortune on the picture, which was hacked into several shorter, less coherent...

LouA said:
If you are saying that The Alamo is too low brow for Criterion, that’s another story!
Click to expand...

Variety called 1972's Pink Flamingos "the most vile, stupid, and repulsive film ever." I'm sure there have been many challengers to that title since then. Even so, Criterion gave it a 25th anniversary laserdisc with a director's commentary.

MatthewA said:
Variety called 1972's Pink Flamingos "the most vile, stupid, and repulsive film ever." I'm sure there have been many challengers to that title since then. Even so, Criterion gave it a 25th anniversary laserdisc with a director's commentary.
Click to expand...

battlebeast said:
Sooooo... THE ROCK and ARMAGEDDON are important films?
Click to expand...

Those are the obvious examples. Criterion has argued that Armageddon was a prime example of the big-screen special effects blockbuster beast. The response to that is generally, "Yeah, sure. Whatever you say. "

But there are plenty of other titles from them that can be just as reasonably questioned, like (for me) Blood for Dracula and Flesh for Frankenstein.

Ah, a French release is showing up on Amazon.fr for a June 16th release, a two disc set, but it looks to be the same price as the German Mediabook (French releases do tend to be a wee more expensive than German ones). I'll stick with the German release, but it's interesting that it's coming out in more than one country.

Is there a link to the Amazon.de release?

Bob Cashill said:
Is there a link to the Amazon.de release?
Click to expand...

So far there's only a link to the Amazon exclusive cover version.

Amazon product
& here's a link to cover B, which Amazon don't seem to be carrying yet, although I'm sure they will (I can't say I'm keen on the French cover, although I'm really not that bothered about covers).

Robert Harris said:
Yes. And that's all that can be done with the roadshow.
Click to expand...

Barring, of course, the discovery of another pristine 70mm roadshow print in Canada (or elsewhere) -- not holding my breath. Darn.

Amazon.de is always funny about pre-order BD discs and there is no way to basket them until near or exactly on the release date. I found this with the Nefertiti and Romulus and Remus and am still waiting to basket the upcoming The Long Ships. I'm excited about this Koch Alamo BD as their product usually looks great and will order as soon as it's ready to go!

Amazon.de of course is available in English and available easily through the Amazon app.

Is the French release region B?

battlebeast said:
Is the French release region B?
Click to expand...

Too early to say, the releasing company is ESC Editions, & I don't know them. Now if it were Elephant Films, you could almost guarantee it would be multi-region, but I dunno with ESC. Anyway, MGM are obviously licensing out their HD master, I wonder if it'll pop up in another country?
P

jayembee said:
I'm guessing that international buyers will be able to order it from Amazon DE starting on May 13th, if not May 12th. For the past year or so, Europe-based Amazons have not accepted pre-orders for international shipping, but allowed them once the title was actually released.

I'll be curious to see if Diabolik DVD will have copies available.
Click to expand...

I live in France and have never had any problem ordering from Germany or Spain, but that’s the EU for you I guess.
P

Ernest said:
Amazon.de (Germany) is taking DOMESTIC pre-orders only for a May 12th release of The Alamo. The release will include 2 discs with the theatrical version (162 minutes) on BluRay and the extended cut of 3 hours 22 minutes on DVD. Koch Film Shop is the distributor and their advertisement shows Region B. For those interested in purchasing the Alamo please be patient hopefully by the end of summer Amazom.de will sell this particular release to international buyers.
Click to expand...

The French version will have the extended cut only dubbed into French. Is the German in German? The theatrical cut will be available in French or English, and there is a long interview with Patrick Wayne promised. Amazon.fr says JUNE 16th release.
Oh just noticed it says long version is also Blu Ray!
Last edited: Apr 30, 2021

Is the the extended cut of 3 hours 22 minutes on DVD in the German set simply a porting over of the extended version that exists on the laserdisc, or is this a different compilation from other sources? If so, then other than having the shorter version on BD (which I'm not that interested in) I'd be fine just watching the extended cut on the laserdisc that I've owned for the last 25 some odd years. The Dolby Digital 5.1 audio track on the LD is window shattering!

The extended cut is from the same 4x3 letterboxed standard definition master used on the laserdisc, according to the press release.

Josh Steinberg said:
The extended cut is from the same 4x3 letterboxed standard definition master used on the laserdisc, according to the press release.
Click to expand...

Correct but should be Anamorphic which should make it a small upgrade over the Laserdisc.

Randy Korstick said:
Correct but should be Anamorphic which should make it a small upgrade over the Laserdisc.
Click to expand...

Randy Korstick said:
Correct but should be Anamorphic which should make it a small upgrade over the Laserdisc.
Click to expand...

How would one make it anamorphic?
You must log in or register to reply here.