The absolute best 3D Blu-ray Disc that you can buy! (1 Viewer) 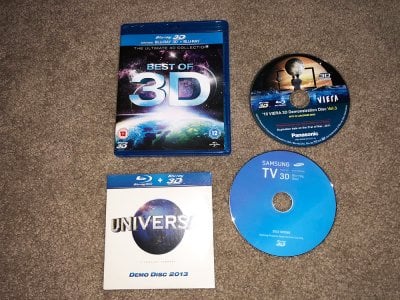 My fault and apologies. For all these years, as "THE HTF 3D ADDICT," I never talked about sampler discs.

I suppose the reason I just failed to ever mention these discs was that they were not mainstream titles, often difficult to obtain. Some of these discs I happened to receive directly from manufacturers when I visited demonstrations at their facilities.

However, eBay has become a very popular source for these discs when they can actually be found.

A simple search of 3D Demo Discs on the site brings up a small handful of available titles that you can buy rather cheaply. Of course, by the time this review gets posted and readers catch on to what is available and how great these discs actually are, there may not be anything left.

In short, these 3D demo discs are an exclusive product from the manufacturer to stores like Best Buy, who used to show these off in their stores as a way of selling 3D displays. I say "used to show these off," as all these discs are now several years old (circa 2011-2012) and represent a format that is now considered dead.

What is so incredible about these sampler discs is the fact that almost all the content is specifically filmed in the format and designed to deliver the ultimate WOW factor.

The photo above represents a few of the sampler discs I have collected over the years. All of them are spectacular. Two of my favorite discs are the Panasonic Viera and Samsung TV samplers. On the Panasonic 2010 Viera disc, for instance, there is an awesome sequence taken from the opening or closing ceremonies from (I believe) the Beijing Summer Olympics. It's simply breathtaking. On the Samsung 3D sampler disc, there is some great concert footage, particularly from The Black Eyed Peas performing "I Got A Feeling" in front of a huge crowd.

Based on an eBay search I just performed, it seems that both of the above-mentioned discs are no longer available (though there are 2011 Panasonic Viera Sampler discs). However, those willing to do deeper searches using search engines may still find someone looking to unload those discs. In the meantime, you may want to grab whatever you can find on eBay at the moment (see my above search link). 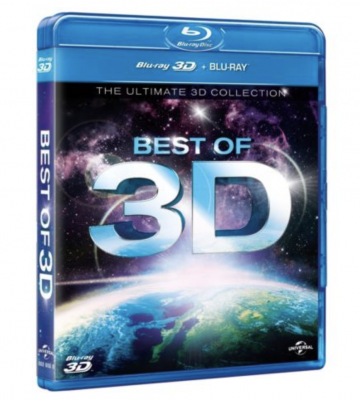 What I do urge anyone who is interested to do, is grab a copy of this particular sampler.

It is by far, the most amazing 3D sampler disc I have seen to date. So superb in fact that I would have easily rated it the best disc of The Top 30 Must-Own 3D Titles if not for the fact that this is not a mainstream title and will soon become absolutely unobtainable.

As a sampler disc, this Universal Studios issue presents an onslaught of material (24 chapters in all) of amazing mind-blowing 3D content. It includes an excellent cartoon short, underwater photography, American landscapes, Fireworks, and so much more! There are entire sequences dedicated to actors blowing bubbles or throwing items at the audience.

What is so utterly amazing about this disc is that the 3D surpasses anything I have seen before.

The standard for me, when it comes to the best 3D demo of all time, is the Cod Fish sequence in the Imax release, Under The Sea. That is the one sequence that generally blows the minds of anyone who has no idea the potential WOW factor that the format provides.

Best of 3D surpasses that disc (and any other as far as I am concerned) in providing the most abundant "In Yo' Face" content I have ever seen. I sat in my theater chair tonight openly blurting, "WOW" several times over.

I read so many complaints about how uninteresting 3D has become. It's no wonder the format has died. It never really became the attraction it should have been. Filmmakers refused to use pop-out to stun theater audiences. Instead of filming in native 3D, most studios opted to upconvert their films to the format. Really, the only interesting 3D stuff that has been released as of late is through the 3-D Film Archive. This is because those films from the 50s remain the staple of what this format was supposed to be all about.

The only way to really see how the technology has progressed in modern times is through sampler discs like these.

If you are quick enough and can get your hands on this particular disc, I promise you the most awesome, 3D home experience you are ever going to find. Trust me, I have seen just about everything out there and this demo disc will be the answer to all of you who complain that you aren't seeing enough pop-out on your displays.

While the disc has been released exclusively overseas, it is region-free.

Grab this while you can. It may no longer be available by the time you read this review. Of course, better to buy it new in shrink-wrap, but if those are sold out, well worth buying it used. Just get your hands on it one way or another.


Note: This is meant to be a demo disc. There is no story. There are some instances of repetitive footage, though its minor.

Thanks Ron. A quick Amazon check shows Best of 3D available in the $14 to $16 range, with several options fulfilled by Amazon. I'm giving it a shot.

Mike2001 said:
Thanks Ron. A quick Amazon check shows Best of 3D available in the $14 to $16 range, with several options fulfilled by Amazon. I'm giving it a shot.
Click to expand...

I am surprised. Never thought that this would be available on Amazon. Perhaps this is a mainstream demo release rather than manufacturer related.

I thought I had this, but a quick check told me otherwise. I have just ordered through the link. Thanks so much for the tip!

FYI: Germany has multiple Award Winning features in different region-free volumes of "The Best Of 3D" I'll have to take a look

I'll have to take a look
Click to expand...

Yes, Amazon.de has 5 titles that include 15 Volumes. 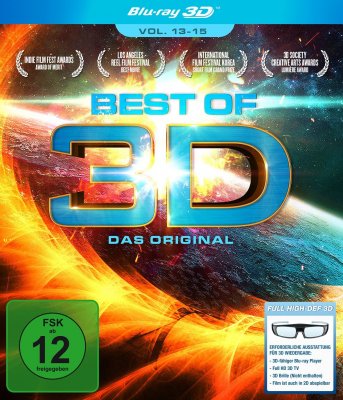 And a Volume for kids. 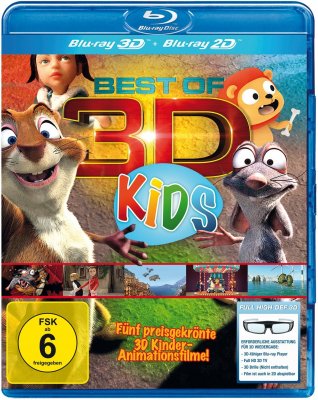 Just did a conversion. Looks like they are under $20 each. I may buy them all.

I wish I had that Disney showcase disc, but I've never seen it on ebay for less than $50 - and I just find it hard to bring myself to spend $50 for one Donald Duck 3D short. But I do wish I had it.

Josh Steinberg said:
I wish I had that Disney showcase disc, but I've never seen it on ebay for less than $50 - and I just find it hard to bring myself to spend $50 for one Donald Duck 3D short. But I do wish I had it.
Click to expand...

It does show up cheaper at times, but it's just plain luck to run into it. I think I got mine a few months ago for $24 used (??)

Just a word of caution about those amazon.de Best of 3D volumes... The BD that Ron is describing in the first post of this thread is a Universal production, if I am not mistaken, and I am sure that Ron‘s description is accurate. On the other hand, those 15 volumes on Amazon.de are not from Universal but from some company calling themselves „3D content hub“. But that‘s not all that worries me... Check out the reviews, they are very, very mixed, in fact about 90% of them are abominable. Now I know you can‘t always trust reviews on Amazon, but still... I have a bad feeling about this. Hope I‘m wrong.

Thank you for the word of caution!

Mine is a Universal release. Has the logo on the spine and on the presentation itself.

Anyone else owns those other titles that can chime in? I will hold off ordering.

If you look at the back of Best of 3D cover-insert that Ron has you will see "3D Content Hub Presents 'Best of 3D"
"Film © 2013 3D Content Hub. All Rights Reserved."
"www-universal pictures-co-uk"

FYI: The second title in the series, Best of 3D - Volumes 4-6 has 'Cosmic Journey, View In America, Nuts And Robbers, 3D Storm Surfers', which are the same features that are on Ron's "Universal Pictures" Best of 3D disc.
Last edited: Jun 7, 2018

Thanks. I’m going to check this out. I’ve got the enthusiast-generated “bootleg” 3D samplers (filling the void that Hollywood ignores), but they’ve not really done a lot for me. Definitely curious about a best-of-the-best.

That said, I’m glad I only spent a total of $60 for my six sets of 3D glasses because they’ve sat unused for 18 months.

Can't find any copies of the Universal disc...

Paul Hillenbrand said:
If you look at the back of Best of 3D cover-insert that Ron has you will see "3D Content Hub Presents 'Best of 3D"
"Film © 2013 3D Content Hub. All Rights Reserved."
"www-universal pictures-co-uk"

FYI: The second title in the series, Best of 3D - Volumes 4-6 has 'Cosmic Journey, View In America, Nuts And Robbers, 3D Storm Surfers', which are the same features that are on Ron's "Universal Pictures" Best of 3D disc.
Click to expand...

Thanks for this information, Paul. I didn‘t see that cover insert. Guess I was worried for nothing, and I will certainly get vol. 4-6, if nothing else.
W

Ronald Epstein said:
I am surprised. Never thought that this would be available on Amazon. Perhaps this is a mainstream demo release rather than manufacturer related.

Dick said:
Can't find any copies of the Universal disc...
Click to expand...

I just checked, it's showing in stock on Amazon via the link Ron provided
Last edited: Jun 7, 2018

Mine’s coming Saturday from Amazon.
You must log in or register to reply here.

Blu-ray Review A Few Words About A few words about...™ Wayne's World (unboxing)-- in Blu-ray