Thank Your Lucky Stars is a 1943 musical extravaganza from Warner Brothers. It has a thin plot, but the plot is almost beside the point. The film was made as a fundraiser for the Hollywood Canteen, which provided food, dancing and entertainment for soldiers and sailors during World War II. The numerous Warner Brothers stars who appear in the film donated their salaries to the Hollywood Canteen, and from all appearances a good time was had by all. Thank Your Lucky Stars now comes to Blu-ray with another outstanding transfer from the Warner Archive. 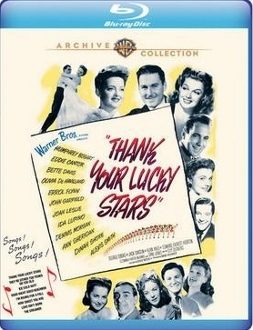 The cast listing alone should provide sufficient enticement to buy this Blu-ray of Thank Your Lucky Stars:

Davis and Garfield were founders of the Hollywood Canteen, which opened on October 3, 1942 and closed on Thanksgiving Day in 1945.

The plot, such as it is, involves two theater producers, Farnsworth (Edward Everett Horton) and Dr. Schlenna (S.Z. Sakall), who decide to stage a wartime charity show. They give the lead role to the egotistical Eddie Cantor, who essentially takes over the show. Tommy Randolph (Dennis Morgan) and Pat Dixon (Joan Leslie) are aspiring singers who hatch a plan to get into the show. They know a bus driver, Joe Simpson, who is a dead ringer for Cantor (because it is Cantor in a dual role). They figure that if they can have Simpson replace Cantor, the bus driver will let them appear in the show.

That, of course, is just an excuse to feature one Warner Brothers star after another, often in surprising and sometimes humorous situations. Would you like to see Bette Davis sing a song and do a bit of dancing? She does it here, doing her best to sing "They're Either Too Young or Too Old." Or would you care to see Errol Flynn singing and dancing as a penniless sailor who supposedly just returned from the war? You can see him here, singing "That's What You Jolly Well Get."

The other musical numbers are as follows:

One highlight is Ann Sheridan belting out these suggestive lyrics by Frank Loesser:

Humphrey Bogart doesn't sing, but he has an amusing scene with S.Z. "Cuddles" Sakall wherein the usually placid Sakall talks so tough that Bogie has to back down!

Thank Your Lucky Stars is a very entertaining film, and it is also a fascinating time capsule of how Hollywood films helped to boost morale during World War II.

The 1080p black and white image is properly framed at 1.37:1 and is encoded with the AVC codec. The result is simply magnificent, yet another stellar Blu-ray from the Warner Archive.

Our resident film restoration expert Robert A. Harris has given the Blu-ray of Thank Your Lucky Stars his unreserved approval, and I concur with him in every respect. Readers of this review are encouraged to take a look at his comments:

A few words about...™ Thank Your Lucky Stars -- in Blu-ray

The DTS HD-MA 2.0 mono soundtrack is of course limited by its source material, but I doubt that it sounded this good in theaters in 1943. Every word of dialogue and all of the lyrics are clear and understandable. There is no hiss, crackling, distortion, or other age-related anomalies. Simply put, the audio is probably as good as it possibly could be.

This Warner Archive Blu-ray is loaded with extras, similar to the delightful supplements we saw on the Blu-ray of 42nd Street.

Food and Magic, directed by Jean Negulesco, is a World War II short featuring Jack Carson as a magician who encourages his audience to help the war effort by not wasting food.

Three Cheers for the Girls is a short which is appreciative of chorus girls and then abruptly and somewhat oddly closes with Dick Powell leading a Marine chorus (all men, of course) in a patriotic tune. Another musical short is the self-explanatory The United States Army Band.

Hollywood Canteen Celebrates First Birthday is vintage newsreel photo which is shown without sound. I presume that it had narration which has been lost.

Also included are the theatrical trailers for Thank Your Lucky Stars and Watch on the Rhine.

Finally, the Screen Guild Theater did a radio broadcast of Thank Your Lucky Stars in September, 1943, which features many of the stars who appear in the film. The radio broadcast can be heard in its entirety.

There are no chapters per se, but there is a song selection menu which allows the viewer to jump to whatever song you wish to see and hear.

The Warner Archive has turned out a remarkable string of high-quality Blu-ray releases, and Thank Your Lucky Stars is a worthy edition to the catalog. The film boasts a remarkable cast of stars, elaborate musical numbers, and some tongue-in-cheek humor which will keep the audience smiling until the final scene.