After snagging the rights to the Terminator Franchise, Paramount poured a sizable amount of money into Terminator Genisys hoping to ignite a rebirth of the movie series hampered by two disappointing sequels (following 1992s landmark first sequel, Terminator 2: Judgement Day). The plan didn’t win over American audiences who seemed to avoid giving the film a chance. And those who gave Genisys an opportunity were split on whether it entertained and gave the series a worthy direction to go.

In the end, Terminator Genisys as restart for the franchise succeeds more than it falters. Lighter weight than the series best, but a fun popcorn flick regardless that features a more comical Arnold and plenty of visual effects crafted with expert skill, with innovate results - including the recreation of a 1984 Arnold from the opening of the original Terminator which stands stands as a remarkable feat of computer generated imagery. 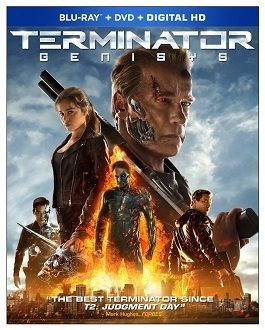 “The worst extinction units posed as humans. We called them terminators. And then one man found me. His name was John Connor, and he changed everything. John showed us how to fight back; how to rise up. He freed prisoners. He taught us how to slash the machines to scrap. People whisper about John and wonder how he can know the things he does. They use words like prophet, but John's more. We're here because tonight, he's going to lead us to crush Skynet for good.”

Mankind’s war against the machine – and its future success – has always rested on the cycle of events through time, where future warrior Kyle Reese (Jai Courtney) is sent back in time to 1984 to protect an unwitting Sarah Connor (Emelia Clarke) from a terminator sent to kill her. They would form a bond and their union result in the birth of John Conner – future leader of the resistance and primary cause of the downfall of the machine’s domain over humanity. But when the machines change the paradigm, the vicious cycle of time, death and defeat is irrevocably changed and the threat from Skynet and the machines more menacing than ever before. The future is never set, but now even the past appears to have changed.

In the Terminator franchise, now five films deep, the story has existed on the basic tenets of the ideas explored in James Cameron’s 1984 original, The Terminator – with the attempt of Sarah and John Conner to set in motion the eventual destruction of Skynet, machine architect of mankind’s downfall. Variations on that theme – a machine sent back to upset time – have relied on an evolution of the terminator technology to try and keep the films fresh (from T-800 standard terminator, to the liquid metal T-1000, and the T-X in Rise of the Machines, able to house onboard weaponry). That formula took a backseat in the flawed Terminator: Salvation, set after the fall of civilization where the human resistance is hunted, and where John Connor was still just a rising star.

A return to the ‘variation on the theme’ formula may then seem like a step back, but curiously, the knowing embrace of the roots of the original serves up a fresh expression of ideas. And it solves a few of the challenges, including an aging Arnold Schwarzenegger. It also gave the franchise the opportunity to twist and throw the familiar tenets of the story for a loop. Arnold Schwarzenegger’s reprisal of the protective T-800, referred to here as the guardian, is welcome. It is a role he plays effortlessly, and though the menace of his character is all but gone, he still wears it well. Jason Clarke (Dawn of the Planet of the Apes) is an unusual choice for John Conner but, it turns out a good one. Jai Courtney was a less inspired choice to portray Kyle Reese (played by Michael Biehn,) though he grows into the character as the film progresses and handles himself nicely during action sequences. As things slow down, he becomes less exciting a choice. Emilia Clarke’s portrayal of Sarah Connor is perhaps the film’s highest hurdle. She does well, but while the Sarah Connor she portrays is tough, prepared and assertive - vastly different than the frightened character we found in Cameron’s ‘84 story – she doesn’t offer the same depth or endear herself as Hamilton did. We can in part blame the script, but the magnitude of the characters she and Jai Courtney inhabit required something more than what we see.

Written by Laeta Kalogridis and Patrick Lussier, and directed by Alan Taylor (Thor: The Dark World) Terminator Genisys plays best as a direct sequel to T2; certainly the best of the post T2 sequels, but the film’s greatest success is as a fun, exciting action film. If you set aside the weight and expectations of the overall franchise, Genisys is a far better and more competent action spectacle than the critical consensus might have you believe. And while twisting and morphing timelines weave loosely, complaints of confusion seem unfounded. The film works hard to explain how the original timeline had been altered through a brief scene where the T-800 was sent to protect Sarah Conner as a child, an event that establishes the guardian relationship with Sarah, and allows for the T-800 to lie in wait for the events of the 1984 film to begin. And though familiarity with the earlier films in the franchise is important for the fullest experience, this film can standalone as a time-travel conceit. But there are issues.

Terminator Genisys’ deepest flaw is the failure of the story or direction to create an emotional foreboding or a resonating moment of introspection that the weight of the bleak future demands. 1984’s The Terminator gave us such a moment in the tunnel between Sarah Connor and Kyle Reese; Terminator 2: Judgement Day was expert in creating that sense of impending danger through Linda Hamilton’s somber voice-over narration. Here, the brisk pace of the film makes for an exciting experience but one that moves a too fast through quieter moments; moments that should have helped build deeper emotional connections with the characters and their predicaments. The pacing also pushes the story through key plot evolutions, brushing past pivotal moments (the introduction of the Genisys system, for example) in a rush to take advantage of that just-introduced point. There are holes in the plot as presented in these two hours, one sizeable, though it’s large enough that one must assume it was intended to be resolved (answered) in any planned sequels.

Director Alan Taylor handles the scale of the production well and facilitates the multiple action sequences capably. Hard as it is to be measured against the particular skill and influence of director James Cameron in staging and pacing spectacular, meaningful action sequences, Taylor shows the keenest instincts of the franchise since T2. But again, crafting the sense of an ominous tomorrow, or the gravity that future demands - the kind Cameron created for the first two entries - is amiss under Taylor’s helming.

Paramount Home Entertainment delivers Terminator Genisys in a stunning Blu-ray, with exceptional clarity, exceptional vivacity of color, and exceptional black levels and depth. Visual effects sequences positively pop off the screen, even in the 2D release (a 3D Blu-ray version is also available from Paramount, and was reviewed by HTF’s Ron Epstein here).

The rich, contrasting colors during daylight and action sequences, and the familiar steel-blue for night and future sequences are vivid, impressive. A top-notch presentation.

Paramount provides Terminator Genisys on Blu-ray with a Dolby Atmos audio option. Though I am (not yet) equipped for Dolby Atmos, the compatible Dolby TrueHD 7.1 offers a fantastic audio experience. Deep, bellowing bass, precision sound effects and exceptional clarity. Films such as Terminator Genisys, with major action set pieces, have ample opportunity to feel out every inch of the home theater, and Genisys takes up that opportunity and excels. The school bus sequence on the Golden Gate Bridge is one example of full throttle sound design alive in the 7.1, and it joyfully throws down.

Dialogue is issue free and well-leveled in the center channel and directional effects bring you into the action.

Dolby Atmos Update: I watched in Dolby Atmos using a 7.2.4 system (4 ceiling speakers). It took a great mix and made it better. Enveloping became ENVELOPING. My favorite moments were anytime a time travel device was used. I felt like I was in the middle of it myself every time the device "wooshed" overhead. The bridge/bus scene and helicopter chase were great too. -- Adam Gregorich

A disappointing collection of special features covering key portions of the production – location shooting, visual effects work, and a look at the cast. Given the complexity of the visual effects and the scale of the time-twisting story, a much deeper examination of the production and the ripples through the previously known story timeline would have been quite welcome.

Terminator Genisys does not capture the ingenuity of 1984’s The Terminator or the scale and action accomplishment of Terminator 2: Judgement Day. It also has its share of flaws and weaknesses that deservedly opened it for some of the criticism piled upon it. But issues and shortcomings of comparison aside, Genisys is exciting, engaging and most of all, entertaining. Its domestic box office failings would suggest the possible future sequels won’t come to fruition, and while the international box office (and China’s haul in particular) gave hope to future installments of Paramount’s Terminator at the cinema, early indications are the post-mortem on Genisys’ performance would likely produce a different, more modest continuation (television seems the most likely outlet).

A shame, as there is energy and excitement back in the franchise for the first time since T2.

Thanks, Neil. I will watch in Dolby Atmos over the next few days to see how that enhances the standard 7.1 mix

Yes, but when the bar is set that low, it's not very hard to clear.

My recently wedded daughter calls me "Pops." "Terminator Genisys" opened a whole new era in family communications. It's a pretty nifty entertainment as well. The franchise is OLD, not OBSOLETE!!

I updated Neil's review with some notes on the Dolby Atmos mix. I hadn't heard much about it during its theatrical run other than the box office wasn't looking good. Overall I enjoyed the film and found it entertaining. It isn't as good as T2 my personal favorite of the series, but it had most of the elements that make a good Terminator film.

A Great read here with the VFX Supervisor Sheldon Stopsack. I was personally blown away with the work on "younger Arnold"

So i bought the Best Buy non-3D version for the lenticular packaging and over 90 minutes of exclusive (to Best Buy)content. But i was thinking about exchanging it for the 3D version which doesn't seem to have the 90 minutes of exclusive content. The question i have is: for those of you who have the version with the extra stuff, is it worth keeping the regular blu-ray for the extra content?
You must log in or register to reply here.