Wayne_j said:
Her rep Mike Pingel told Variety that although her husband, Lance O’Brien, was originally told she had died, the hospital called Monday morning to report she was still alive.
Click to expand...

TMZ spoke to her partner who gave a different account: 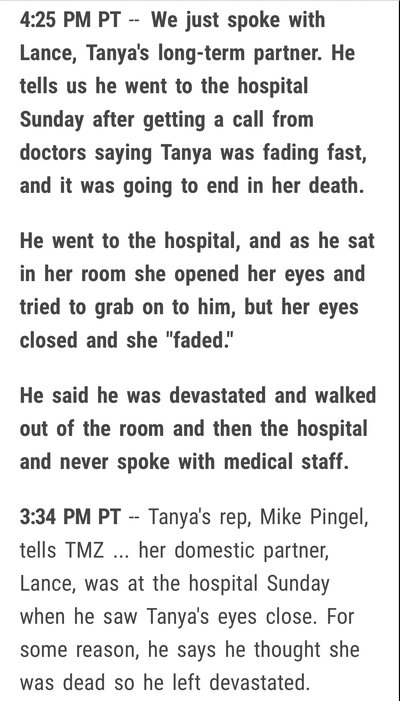 Should somebody update the thread title to account for her being alive?

Jake Lipson said:
Should somebody update the thread title to account for her being alive?
Click to expand...

Jake Lipson said:
Should somebody update the thread title to account for her being alive?
Click to expand...

That's something only the moderators can do.

Not the first time this has happened (Mark Twain).

Well this was awkward 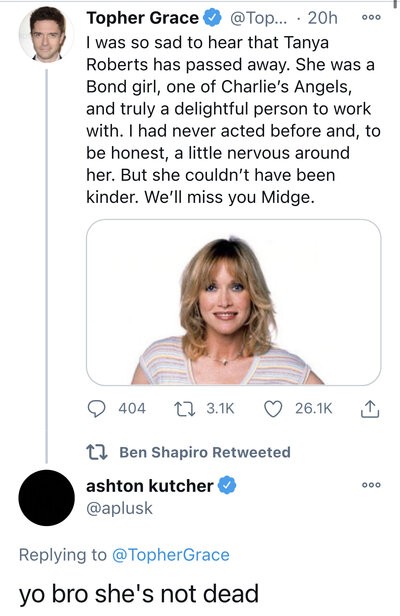 Cranston37 said:
Well this was awkward

I smell a Lifetime movie ...

I'm not sure which will cause more problems for her publicist: the "news that she was dead" or that she was 65 ...

And now she has officially passed, according to TMZ...

Here we go again. Apparently it's the real thing this time. https://www.tmz.com/2021/01/05/tanya-roberts-dead-dies-65-bond-girl-70s-show-premature-announcement/

This has been embarrassing and disgraceful.

Tino said:
This has been embarrassing and disgraceful.
Click to expand...

And for once, it isn't the media's fault.

I mean, when an official rep and a domestic partner give you the story, you kind of figure it's accurate.

What a sad footnote to her legacy.

This is still my favorite Tanya Roberts moment...

It's not that uncommon for this to happen. It happened with Carrie Fisher and Tom Petty, both of whom had one source or another announce their deaths before it was confirmed, or before they actually passed. It Petty's case, it was the LA PD that made the mistaken call. In both of those cases, and I suspect with Roberts, they appeared to be near death, or the doctors expected it, and the announcement was made prematurely, which is terrible, and deeply upsetting to the families.
G

Not only did THAT '70s SHOW earn Tanya some overdue respect, but her much-maligned performance as SHEENA has gained stature over the years, especially among environmentalists and animal rights activists who don't give a damn about movie critic opinions. Even detractors admit that her earnest commitment to the strenuous part was impressive, and I've always maintained that a person raised in semi-isolation who is told she's a goddess in human form would indeed speak in over-emphatic, forced declarative statements when she finally encounters strangers in her midst. In some ways, Tanya was more honestly Sheena than a better actress with more seasoned finesse might have been.
Last edited: Jan 5, 2021
You must log in or register to reply here.

Parent Hood Actress Suzanne Douglas Has Passed Away At Age 64

Time/Life Press Release: The Soul of The Midnight Special