Tales From The Crypt Presents: Demon Knight was supposed to launch a new movie franchise for the producers of the HBO series and distributor Universal Pictures, bringing one or two stories to the big screen each year while continuing to produce episodes for the small screen. Director Ernest Dickerson hit a home run, thanks to a clever script, a terrific ensemble cast, and allowing star Billy Zane to improvise and steal the show. 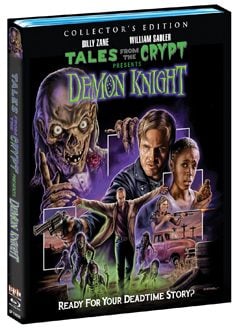 Brayker (William Sadler) is being chased through the New Mexico desert by a man known only as The Collector (Billy Zane), claiming that Brayker stole an item that belongs to a client. After what appears to be a fatal car crash is discovered by the local Sheriff John Schuck) and his bumbling deputy (Gary Farmer), The Collector joins them in pursuit of Brayker, who has befriended the town drunk, Uncle Willy (Dick Miller) and taken a room at the nearby boarding house (a former church), run by Irene (CCH Pounder) and assisted by Jeryline (Jada Pinkett Smith). What they soon discover is that Brayker is in possession of a cross filled with the blood of Jesus (along with other Demon Knights who have passed on the cross over several generations), which is used to keep demons like The Collector from destroying the human race. The Collector then summons a demon army to attack the boarding house, preying on each individual’s weaknesses, hoping to turn them or destroy them, or both. As things begin to look bleak, Brayker prepares to hand over the cross to the next Demon Knight, who must then do battle with The Collector in a no-holds-barred showdown.

Demon Knight could have easily been a typical, low budget studio-produced horror film, benefitting from its relationship to Tales From The Crypt. The screenplay by Ethan Reiff, Cyrus Voris, and Mark Bishop is, at its core, a siege story, wherein a group of people are holed up in a building surrounded by a group that wants in at all costs. And, sure, many of the characters are stereotypes, but it is how each actor portrays them that really makes the movie click. Sadler was making a name for himself as a character actor shortly before making this movie, with notable and memorable roles in Die Hard 2: Die Harder, Bill & Ted’s Bogus Journey, and The Shawshank Redemption, and continued that reputation here as Brayker. Dick Miller was a veteran of this type of film, having appeared in several features for Roger Corman and part of Joe Dante’s acting repertoire (including Gremlins and The Howling). Both CCH Pounder and Jada Pinkett provide some strong female characters, while Thomas Haden Church thrives as the misogynistic short order cook and Charles Fleischer (best known as the voice of Roger Rabbit) gives a sympathetic turn as the burned-out postal worker. The real star of the film, though, is Billy Zane, who is allowed to go-for-broke by improvising and going bat-shit crazy as The Collector, a major turning point in his career after small roles in Tombstone, Posse, and the Back To The Future series (his only notable leading role at that time was in Dead Calm). It is a real tour-de-force performance.

Tales From The Crypt Presents: Demon Knight arrives on Blu-ray from Scream Factory (an imprint of Shout! Factory), thanks to their licensing agreement with Universal, in a very nice 1080p transfer compressed using the AVC codec, retaining the film’s intended 1.85:1 theatrical aspect ratio. Fans will be happy to know that the film begins with the original Universal Studios logo (the one with the theme by James Horner). Although the movie begins rather soft, this is likely due to the inclusion of the series’ opening opening title sequence created by Boss Films, which was never intended to be seen on a big screen. Once that ends, detail overall takes a huge bump up in quality (with the exception of a few optical effects sequences - this was made prior to the extensive use of CGI and digital intermediates). Contrast is well-rendered, even for such a darkly-lit film. Colors are consistent and not over-saturated. This is probably the best Demon Knight has looked in years.

As with most Scream Factory releases, Demon Knight contains both 5.1 and 2.0 stereo soundtracks (the movie was released at a time when Universal used DTS almost exclusively on all of their releases). The 5.1 track is quite active when it needs to be, with some nice front-back panning effects. Dialogue is clear and well-defined, never getting lost in the mix. LFE is a bit weak, but this is a low-budget production made in the early days of DTS. Not quite demo material, but it’s still a fun track.

Audio Commentary with Director Ernest Dickerson: Dickerson discusses how he became involved in the film, speaks briefly about his work with Spike Lee and George Romero, and the production itself. It’s a fairly engaging track, with very few dead spots, thanks to moderation by Michael Felsher.

Audio Commentary with Special Effects Team: Todd Masters, John Van Vliet, Thomas Bellissimo, and Walter Phelan discuss the various types of effects used in the film, as well as stories from the set, with help from moderator Michael Felsher.

Egyptian Theater Q&A Session (1080p; 9:46): The Q & A session was taken from the second night of a three day retrospective of Dick Miller’s work, held at the Egyptian Theater in Hollywood, CA on December 6, 2014. Participants include Dick Miller, Rick Baker, and Ernest Dickerson.

Demon Knight is a much better film than it probably deserves to be, and as the film that was supposed to launch the Tales From The Crypt movie franchise, it certainly raised the bar for the next film in the series. Fans of the film and the TV series will be pleased to add this to their library.