Running 5.1.2 . Klipsch all around (rf3's and rc3 rs3.. Klipsch ceiling heights) Denon 3500x. My sub sounds good most of the time. Music bass sounds tight and clean. For movies most of the time bass is good. But at times(hacksaw ridge gunship shooting scene for example). I get some rattling when I feel it should be more bass. I did a quick look and everything appears tight. I haven't torn it apart yet and looked deeper inside. The sub is older but should be capable. It's a dual 12 in ported sub. I have tried all the different tuning with it with same effect s. I don't recall it ever doing this before getting the new Denon receiver and using audyssey. Audyssey has the sub down pretty low. On the gain dial it not even on 2 out of 10.. and in the setting at like -9. Is it possible maybe the gain is just two low? Or maybe the drivers are just tired...but most of the time they sound fine.. any thought be great before I buy new drivers or sub.. 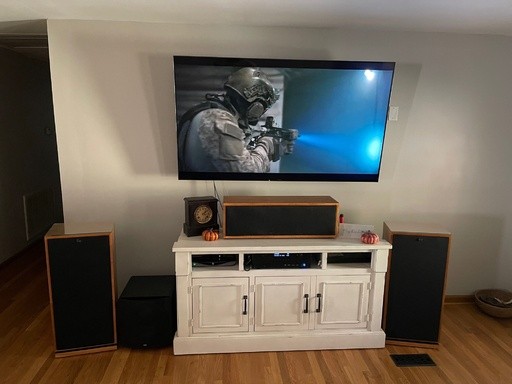 I had an older SVS 20-39PC + that I sold. The buyer reported that it had a pop, which I had not previously noticed. We worked back and forth on a solution, I sent him another upgraded woofer, not the problem. Come to find out, the amp had gone out. The problem only appeared during certain frequencies and volumes. Not exactly the same sound you are describing, but I do know that SVS was very kind to this gentleman when he reached out to them to determine the problem, even though the sub was 17 -/+ years old. You might want to reach out to them and let them guide your investigation. Who knows, they may have a solution requiring nothing, or a solution requiring replacing parts. And MAYBE they will be gracious with you on the money part.

On a side note, when I bought my sub, I was running a Klipsch RF-7, RC-7, RS-7 system. Congrats on the gear, I am sure it sounds great.
Expand signature
"You can only teach respect, respectfully, and you can only teach compassion by being compassionate." John M. Gottman
You must log in or register to reply here.
Share:
Facebook Twitter Reddit Pinterest Tumblr WhatsApp Email Link