Power treatment and surge protectors are usually one of the last places where most enthusiasts spend their hard-earned money. Speakers and displays offer immediate and tangible improvements in sound or video quality. All too often, enthusiasts with a tight budget buy a simple surge strip which promises protection from lighting strikes and brown outs, but in reality very few actually do so.

Two years ago when I wrote about the SurgeX SA-1810, I mentioned that SurgeX is different from many of their competitors because their technology is non-sacrificial, and extremely advanced. This is why you will see more SurgeX gear in auditoriums, pro-sound setups and commercial theaters than anywhere else, and also why many home theater enthusiasts haven’t heard of them. The SA-1810 was a standalone surge protection unit, but at the time SurgeX did not offer any products purpose-built for the home theater enthusiast. Luckily, SurgeX has now come to market with a new product designed for the home theater, the XR-315, so I jumped at the chance to review it.

The XR-315 differs from the SA-1810 since it adds over/under voltage shutdown technology as well as additional inrush current elimination to their surge protection platform, while adding an attractive LED display and using a form factor better suited to home theater cabinets or racks. 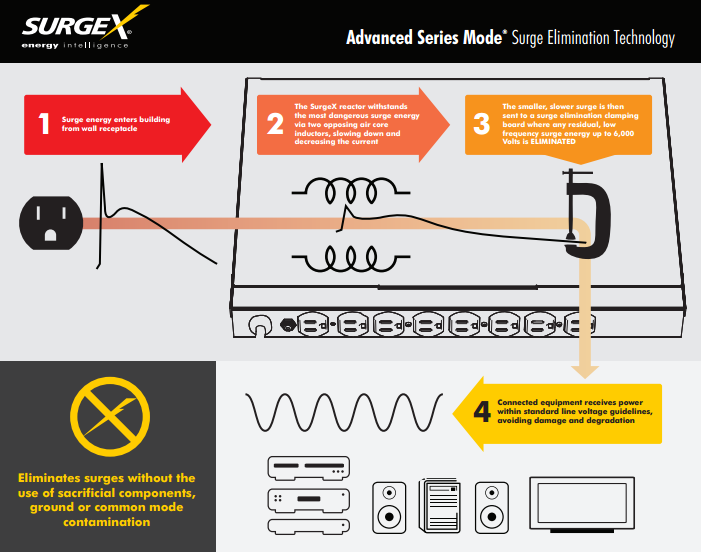 Most big box store conventional power strips are sacrificial by nature. Once a surge strip is hit with a power surge it will either need to be replaced entirely, or some component such as a fuse must be swapped out. This can get expensive over time, and more importantly can be very dangerous since you aren’t always aware when these damaging events occur. As the above graphic shows, SurgeX utilizes a different technology called ASM (Advanced Series Mode), which ensures that the surge flows through a pair of opposing air core inductors that decrease the energy and current (the most dangerous parts of any surge) before sending the surge to a clamping board that removes additional surge energy up to 6000 Volts without any ground or common mode contamination, a problem almost all cheaper units will display.

In the XR series, SurgeX has added two new features, COUVS (Catastrophic Over/Under Voltage Shutdown), and ICE (Inrush Current Elimination) which provide additional protection from brown outs and other power problems that aren’t the result of a lightning strike or surge.
Setting Up


The XR-315 took all of 5 minutes to install into my system, requiring nothing more than unboxing and a swap of cords. The fine people at SurgeX include rack ears in the box with the XR-315, but also provide rubber feet which can be applied to the chassis so it can be used on a shelf. Once the feet are installed, the XR-315 sits comfortably on any flat surface, and is very sturdy. The built-in LED display lights up once the unit is plugged in, and features adjustable brightness, though even the highest setting remains relatively dim for a bright room, which is my only complaint about the display.

The display will show a basic AC voltage reading on the top line, and total current draw in Watts on the bottom line out of the box. Changing settings on the XR-315 is as simple as using two screw driver accessible controls on the front (Select and Adjust), allowing a variety of configurations, though most purchasers will be happy with the out of the box settings. Since the XR-315 includes a powerful microprocessor, many other capabilities are possible out of the box such as controlling one or more slave units (to run them as a single logical unit) or taking remote control input from a 7-pin Phoenix terminal. 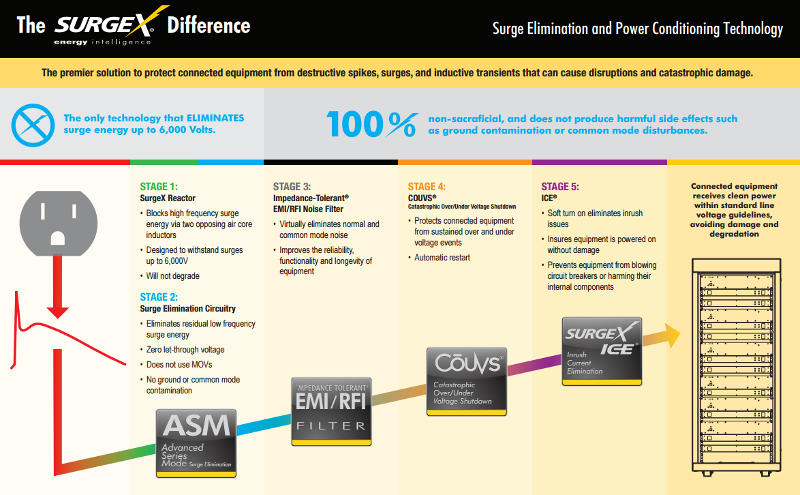 
The XR-315 is in a word, bulletproof. I started with the unit in my living room, as that system didn’t have any existing power equipment other than a Tripp-Lite surge strip. Swapping this out for the XR-315 decreased the noise floor in my system substantially, and eliminated some EMI/RFI hiss I had always heard out of the tweeters. The built-in display confirmed my sneaking suspicions that my Class A amplifier was a power hungry little jerk, and otherwise just provided peace of mind that my system was receiving clean power from the wall.

After testing in the living room, I moved the XR-315 to my theater where all 8 plugs were in use. In the theater system, I noticed no audible or visual differences from the SA-1810, though my wife enthusiastically endorsed the improved aesthetics of the XR-315.

To echo my review of the SA-1810, the SurgeX XR-315 is “incredibly well built, functional and just works forever. Let me repeat that one more time – it works forever. I can’t think of many other home theater investments that you can keep for years and years without any loss in functionality or value.” Though it’s a little costly at a list price of $899 on Amazon, the SurgeX XR-315 is a fantastic product that offers state of the art surge protection in addition to EMI/RFI filtering that matches many much more expensive power conditioners. With a wide breadth of features, handsome aesthetics and non-sacrificial surge protection, the SurgeX XR-315 is a product any home theater owner should be thrilled to own. Recommended.

Thanks for the review, Dave. Wondering how this would compare to my Panamax 5300.

Dave - Never mind. If this unit is what it claims to be it easily bests my Panamax.

I’ve got a Panamax. It’s annoying in that you can’t turn off one of its three banks without pulling the cord. Does this unit let you switch off all outlets from the front face?

Thanks for the review. I’d like to keep it in mind for the next time I am able to upgrade.
R

Hi Dave, I really want to buy the SurgeX XR-315, however, for the life of me I can't figure out if it comes with coaxial protection. On the picture of the back of the device you posted it DOES show coaxial input and output, but in every other picture I have seen the coax inputs are missing. Can you please confirm that the unit does come with coaxial protection?
Thank You!
You must log in or register to reply here.