After a 20-episode first season on CBS, the Girl of Steel will join her DC superhero peers on The CW starting with the second season premiere on Monday, October 10 (8/7c).

The first season ended with Supergirl inspiring the citizens of National City and saving the world from the insidious threat of Myriad; adoptive sisters Alex and Kara Danvers being reunited; J'onn J'onzz being reinstated as the head of the DEO; Cat Grant promoting Kara to a more senior position within her company; and the arrival of a mysterious pod, similar to the one that brought Kara to Earth, its contents (hidden from the audience) shock Supergirl.

Calista Flockhart, whose contract was invalidated when the show left LA, will continue in a recurring capacity as her schedule permits.

The CW is currently repeating the entire first season in order, airing two episodes every Monday. This second run started August 1 and will continue until the Monday prior to the second season premiere.

Mon-El, played by the previously announced Chris Wood.
Kevin Smith will direct an episode this season. Last season, he directed a well-received episode of "The Flash".

"The Flash" and "Supergirl" Teaming Up for Musical Two-Parter
Reportedly the villain Music Meister is the inciting reason characters will break into song.

I had never heard of Miss Martian before, she sounds interesting

I'm not against the Musical 2 parter, it could be good.

Adam Lenhardt said:
Mon-El, played by the previously announced Chris Wood.
Kevin Smith will direct an episode this season. Last season, he directed a well-received episode of "The Flash".

"The Flash" and "Supergirl" Teaming Up for Musical Two-Parter
Reportedly the villain Music Meister is the inciting reason characters will break into song.
Click to expand...

Given that both leads were on Glee, we know they can sing.

And the Flash 'warbles' his voice to disguise it, while the sunnier/ hopeful tone of Supergirl is a 'new direction' fo DC

Supergirl with President of the United States Lynda Carter: A good, fairly in-depth interview with Arrowverse EP Andrew Kreisberg about the second season of "Supergirl"

hallucinations caused by the supervillain.
It looks like Calista Flockhart's only shot scenes for the first two episodes so far, and Ian Gomez's version of Snapper Carr is really going to be taking on the heavy lifting as Kara's CatCo mentor.

The "Supergirl" version of Clark Kent/Superman will go back to the "aw shucks" farm boy archetype of the character, while also portraying a veteran Superman at ease with juggling his dual identities and who, as Clark Kent, is an an experienced and savvy reporter. Love this quote, which is about as concise a summary of what Superman should be as I've yet encountered: "Superman should make you feel like you can do anything, even though he’s the one that can do anything." 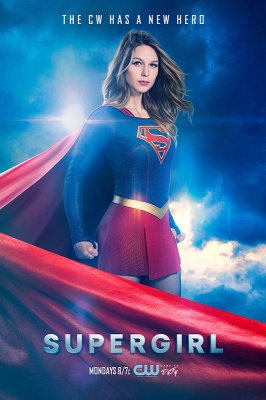 Other than the absurdly long photoshopped cape, it isn't bad.

I thought the cape was Superman's, since it's a slightly different shade of red.

“It’s Superman as I think he was intended to be,” Hoechlin says of his version of the Supes, “which is just an incredible symbol of hope to kids that they can do anything, that they can be good people, and that good people can triumph over evil. You don’t have to be dark and brooding and always in this state of masculine toughness. He sits in that very hopeful and optimistic place that Kara tends to be in.”

He needs to have that curl on his forehead. 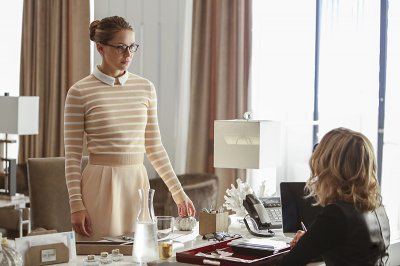 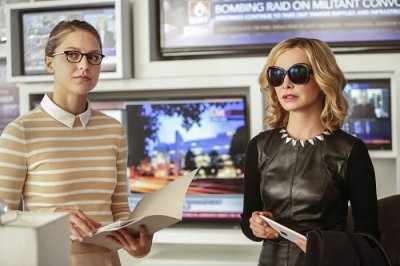 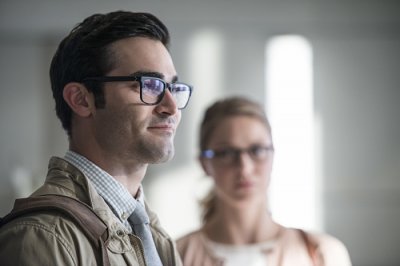 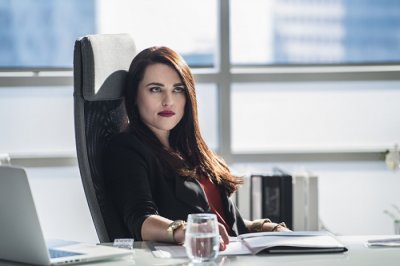 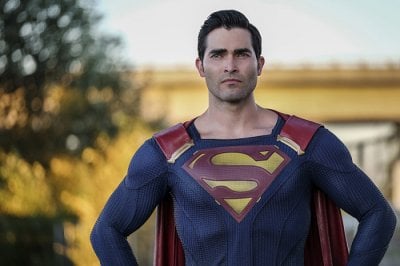 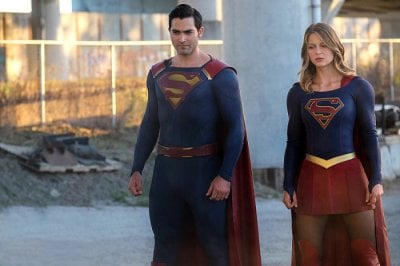 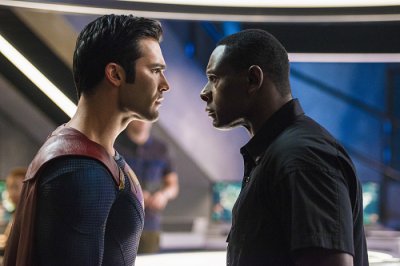 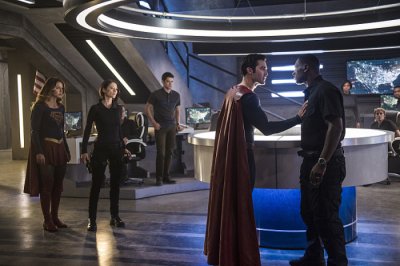 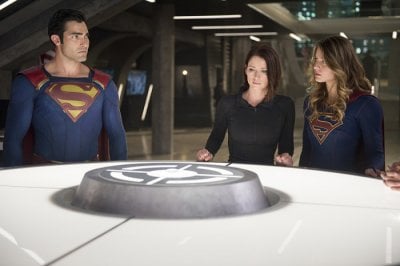 Tyler Hoechlin as Superman; Chyler Leigh as Alex Danvers; Melissa Benoist as Supergirl
It's pretty clear that, as suspected, there's a completely new DEO set for this season. While certain pieces of set decoration are the same, like the round table with the glowing surface, the set is very different. The LA-based DEO set was clearly built into a cave, complete with rough natural walls and stalactites hanging from the ceiling. This set is more bunker-like, with solid concrete walls that give it a look closer to the interrogation room from the LA-based set. And while it's still a pretty vast space, it's not as large as the LA-based set was.

On the other hand, they appear to have replicated Cat Grant's office exactly.

Apparently in the generic establishing shots and the aerial footage of Supergirl flying through the city, Los Angeles will continue to stand in for National City as Boston (with some Frankfurt, Germany thrown in) does for Star City on "Arrow" and Portland, Oregon does for Central City. So we won't have to wonder why the palm trees suddenly disappeared.

"Supergirl" EP Greg Berlanti: Calista Flockhart back as Cat Grant for the first two episodes, "trying to get her for at least six episodes this year".
So that would be just over a quarter of the episodes.

I like the trailer although I wish they wouldn't have gone all "Man of Steel" with her pushing the ground down like that. This show is the opposite of that.

A character from the comics, she runs a casino where a fight club between superpowered aliens and metahumans is the main attraction. She'll appear in the forth episode, with the possibility of further appearances down the road.

I swore I was done posting these, but the latest trailer -- chock full o' new season two footage -- had me grinning from beginning to end:

And this scene from the season premiere gives us a nice glimpse into "Supergirl's" Clark Kent, which is a lot closer to the character I know and love than the Henry Cavill version:

Thanks for those, Adam. The new season looks terrific.

Here's a review of the season premiere that says it is "one of the best hours of superhero TV ever created."

I'm currently in the middle of watching Supergirl on Netflix and have to say, I enjoy watching Supergirl, Arrow and Flash so much more than the Superhero movies being put out now (although eagerly anticipating Wonder Woman). Love the character development and the effects are top notch. These are EXACTLY how I like my superheroes. Gotham on the other hand....

The second season premiere was tonight on The CW.

Over the last couple months, I've re-watched the first season on Blu-Ray, with the two-part season finale saved for earlier this evening. Going right from the LA-shot finale to the Vancouver-shot season premiere is mostly seamless, though the lighting and clarity seemed just a touch more refined before. Hard to say if the different is a real production difference, or just the difference between a mildly compressed Blu-Ray and a more heavily compressed network broadcast. The recreation of the Catco set is remarkably identical; If I didn't know it was a recreation, I'd never have known that anything had changed. The set of Kara's apartment is 95 percent the same; if I hadn't gone from that set at the end of the finale to the recreation at the beginning over the second season premiere, I don't know that I'd have picked up on the minor differences.

The DEO, of course, is an entirely new set based atop a skyscraper in the heart of National City. It's more streamlined but less vast than the subterranean base from the first season. The change is acknowledged with a fun joke, but not really explained.

I still think Tyler Hoechlin's a bit too young for Superman, though an explanation is provided that doesn't entirely satisfy. But after this premiere, I'm totally sold on the casting because he perfectly embodies both Clark Kent and Superman, earnest and Midwestern and warm and nice. He's got the kind of confidence that doesn't require bluster or bragging to prove himself. I like that Clark's awkwardness is real, and not entirely a pretense.

In a way, they were hamstrung a bit by the pod cliffhanger from the first season finale. Because this is basically a second pilot for the show, with the kind of major events that a pilot features. But because the episode had to pick up immediately where the first season left off, there's no breathing room between two major calamities; less than a day after humanity was saved from genocide via Myriad, there's a major launch scheduled for the next era of human spaceflight. Which, of course, goes spectacularly wrong and demands the intervention of both last children of Krypton. The aftermath of the cliffhanger, and the occupant of the pod (played by Chris Wood), are put on hold for a whole next adventure.

There will doubtless be criticism that having Kara pursue a career as a reporter further pushes her toward being a copy of Superman in a skirt, but I kind of liked the development. There's relatively few jobs where you can be missing from your desk for hours at a time without it raising any suspicions, and journalist is one of them. It always bugged me that Cat Grant hardly ever seemed to notice that her assistant was MIA for long stretches of time. And in getting Kara to think about the next steps in her career, it nicely planted the seeds for Cat Grant to reevaluate her own professional ambitions, laying the groundwork for a drastically reduced role for Calista Flockhart on the series. I will miss her, because this episode captured why the Cat/Kara dynamic is so great.

I have mixed feelings about Kara putting Jimmy Olsen in the friend zone. On one hand, I never really invested in that relationship and I think the show's smart to focus on her professional development rather than a relationship. On the other hand, her doing an abrupt 180 about dating Jimmy didn't really ring true to me. I would have liked there to be some inciting event that drove Kara to put that romantic pursuit on ice.

Still, given all that the episode had to accomplish, and all that it did incredibly well, the "Supergirl" team should be proud of their accomplishment. I think we'll have to give it a few episodes -- certainly past this epic Superman two-parter -- to see what form the new normal of the show is going to take in its CW iteration.

EDIT: I forgot to mention that the naming of Cat Grant's new assistant was absolutely inspired. And Cat's "Miss TESCHMACHER!" yell does Gene Hackman proud.
You must log in or register to reply here.