Writer-director Preston Sturges had a successful run of trenchant social comedies in the first half of the 1940s that is practically unparalleled in the history of Hollywood. Of them, Sullivan’s Travels is likely his masterpiece. It’s in turns comic and dramatic featuring the best and worst of humanity on display and covered with that Sturges wit and candor that make his films so unique. This is one of those desert island discs that one could play many times and never tire of, and its arrival on Blu-ray is something to be celebrated. 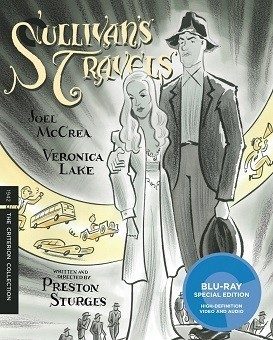 Tired of churning out light comedies and musicals, director John L. Sullivan (Joel McCrae) longs to produce a hard-hitting drama that shows the struggles and tragedies of the lower classes, but he doesn’t feel he can do such a film justice until he’s lived as a homeless person and struggled himself to find food and shelter. His studio bosses (Robert Warwick, Porter Hall) go apoplectic over the thought of risking the studio’s most valuable commodity to the vicissitudes of the outside world, and they try a number of ways to allow Sullivan to do what he wants but without risk. In his initial efforts to go rogue, he meets a struggling actress (Veronica Lake) who’s given up on her Hollywood dream and is planning to return home, but the two are charmed by one another and decide to make the journey into the unwashed masses together. They soon get enough of poverty and return to their creature comforts only to find that fate has different plans for the young Mr. Sullivan.

Preston Sturges’ script includes variations of his wry, rat-a-tat dialogue throughout the film, even when things turn very dark during the final third of the movie. Until then, the verbal and visual hijinks are supremely entertaining with a runaway trailer sequence especially hilarious, and Sullivan’s inability to get far from two destinations (Hollywood and Las Vegas) on his own humorously ironic. Sturges infuses lightly cynical satire into the film during one scene where Sullivan accompanies two sisters to the movies with the noisy crowd busy doing anything except enjoying Hollywood’s commodity on the screen, and yet he manages to find many moments in the movie to insist that humanity from all walks of life generally offers kindness and concern for their less fortunate fellow man more often than not (though certainly not from the one greedy soul who sends Sullivan on his nightmare travails and who manages to be the exception to the rule). There's a treasure-able montage sequence where the two "tramps" have their various encounters with the downtrodden in hobo jungles, temperance meetings, and train yards, Sturges filming it wordlessly with only music on the soundtrack to offer emotional peaks and valleys. The later scenes in the southern prison camp are certainly in stark contrast to the film’s earlier, effervescent comedy amid the luxurious surroundings of a rich Hollywood lifestyle, but even there amid the torture and the muck, there is a kindly force at work, and a sequence at a black church service which ends with the showing of a Pluto cartoon amid the uproarious response of both blacks and whites which shows how movies can be a universal force to bring people together gets the director’s points across quite succinctly.

Joel McCrae and Veronica Lake give natural, very amiable, and very appealing performances as the director and his newly discovered protégé. He looks very believable dressed as a bum while Lake’s tramp attire only seems to emphasize her femininity and quiet charm. The Preston Sturges stock company is fully on display with people like William Demarest, Franklin Pangborn, Robert Warwick, Porter Hall, and Byron Foulger able to weave their dialogue in and out of others’ speaking without a care in the world. As Sullivan’s butler, Robert Greig delivers a wonderful speech about the poor’s rights to a dignified privacy, and Eric Blore as the director’s valet adds his customarily dry quips and body language to the proceedings quite amusingly.

The film’s 1.37:1 theatrical aspect ratio is faithfully presented in 1080p using the AVC codec. It’s a gorgeous transfer overall with nary an age-related splotch to spoil its beauty and a crisp grayscale rendering that offers up rich black levels with solid shadow detail and effortless whites which never bloom. Contrast has been steadfastly maintained to produce this reference quality picture. The movie has been divided into 22 chapters.

The PCM 1.0 (1.1 Mbps) sound mix offers Sturges’ bright dialogue balanced nicely with the Leo Shuken-Charles Bradshaw music score and the film’s numerous sound effects. There isn’t much in the way of age-related artifacts to mar the aural presentation as hiss, crackle, pops, and flutter are simply not present.

Audio Commentary: an edited together commentary originally produced in 2001 features actors Christopher Guest and Michael McKean and filmmakers Noah Baumbach and Kenneth Bowser. Bowser’s comments are the most interesting and pertinent to the film. The two actors tend to ruminate about the impossibility of a film like this getting made today rather than offering much thoughtful analysis to the commentary (though they’re certainly fans despite having some reservations about certain comic and dramatic scenes).

Preston Sturges: The Rise and Fall of an American Dreamer (1:15:13, HD): the 1990 documentary on the up-and-down life and career of the writer-director covers all the bases and includes comments from many who worked for him or knew him including Cesar Romero, Betty Hutton, and Eddie Bracken and features clips from many of his movies.

Sandy Sturges Interview (13:12, HD): the director’s widow reflects on his life and work in this 2001 interview.

Ants in Your Plants 1941 (17:19, HD): a video essay on the film with analysis from critic David Cairns and comments from director Bill Forsyth who relates Sturges’ themes to influences in his own work.

Enclosed Pamphlet: contains the cast and crew lists, information on the film transfer, and critic Stuart Klawans’ essay on the movie.

I love this film! I just wish Criterion would get enough films to do a Preston Sturges Blu-ray boxed set like the one Universal released on DVD.

Was the excellent Sturges documentary re-mastered in HD?

Hollywoodaholic said:
Was the excellent Sturges documentary re-mastered in HD?
Click to expand...

I'm guessing it was just an upconvert. It was 1080i on the readout if I'm remembering correctly.

I'd like to draw everyone's attention to the wonderful 1990 book that Sandy Sturges assembled from Preston Sturges' diaries, letters, and partially-written autobiography: "Preston Sturges By Preston Sturges". Fans of his films will recognize his distinctive style and point of view, and the facts of his actual life are INCREDIBLE.

I just got home with the new Blu-Ray, but I guess my old Criterion DVD isn't going anywhere; the 200 or so still gallery items, including some amazing interactive blueprints, behind-the-scenes and publicity stills, newspaper items, posters, and even some deleted scene stills, are not included on the Blu-Ray, nor is the trailer. I guess these things sometimes happen when the video rights pass from Criterion to...Criterion?

Thanks for the heads up on that. I sometimes tend to ignore galleries, but this sounds like one of the worthy ones.
You must log in or register to reply here.