Suits Season Three makes its argument on DVD in time for the start of the show's 4th season on the USA network. The series is a legal dramedy with a decided emphasis on its comic aspects. Gabriel Macht and Patrick J. Adams lead the cast in this lightweight show, which takes the usual case-of-the-week law firm idea and gives it a bit of a twist. As of the third season, the show takes on a more serious tone as the cases involve heavier matters and a more personal conflict between the characters. People who know much about legal work will still probably not believe this, but more casual viewers may enjoy the show anyway. The Season Three set comes with all 16 episodes of the third year, along with a brace of extras, including deleted scenes, commentaries, a web series, a pair of featurettes, and a gag reel. 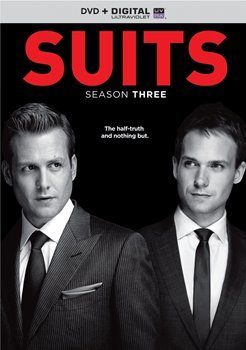 Suits Season Three is presented in a 1.78:1 anamorphic transfer that feels like an accurate representation of the intended look of the show. As with the earlier seasons, there is a certain slickness here, which belies the lower cable budget at play in the production.

Suits Season Three is presented in an English Digital 5.1 Dolby Digital Mix which, like the first season, mostly lives in the front channels but which gets some punch from the music in the surrounds. The dialogue is clear and easy to understand.

All of the discs feature deleted scenes from multiple episodes. The deleted scenes can be accessed either in the episode choice menu or via the special features menu. The scenes can be played individually or via a “Play All” option for the scenes on each disc. The scenes typically begin with the last moments of the prior scene in black and white and then switch into color as the new material begins to play. On the fourth disc, one of the episodes actually features an extended version of one scene.On discs two and four, one episode will feature a commentary with Aaron Korsh and various members of the cast and writing staff. These episodes are “The Other Time” and the finale, “No Way Out.The additional special features are broken up as follows:DISC ONEPreviews – A separate menu option for Previews allows access to trailers for the DVD sets of the following Universal television series: The Office, 30 Rock, Parks & Recreation, House, Grimm, Parenthood, and Monk.DISC TWOAlternate Ending to “She’s Mine” and Alternate Opening to “Endgame” – (2:10, Anamorphic) – This is the original version of the fight at the end of “She’s Mine”, where the fun continues into the following episode. In editing, the producers clearly decided to finish the fight during the first episode and start the next ep with the aftermath.DISC FOURGag Reel (10:15, Anamorphic) – The gag reel this year is about twice as long as the one for the first season. It’s the same mixture of blown takes and gag expressions. In several cases, we’re shown a situation where the actor is going up on their lines and then proceeds to go for multiple takes in the cellar, as it were. Other situations involve noise on the set, mock dancing by the cast, and some interesting alternate line readings by Rick Hoffman…Suits: Trust & Betrayal (9:44, Anamorphic) – This is the show’s usual fluffy featurette, talking about the plot directions of the current season. Among other things, the show’s producers playfully blame the darker tone of the season on the guest stars from Game of Thrones…Shooting Suits (5:19, Anamorphic) – This short featurette offers a quick look at the production of the series.Suits Recruits: Class Action Webisodes – (22:56 Total, Anamorphic) Ten installments of the Season 3 Suits Recruits webisode series are included here in anamorphic widescreen, totaling about 23 minutes.Subtitles are available in English for the episodes and the special features. Each episode can be viewed separately or via a “Play All” function. The episodes have internal chapters but there is no menu for them.The packaging includes a guide with summaries of every episode on the inside sleeve. An insert in the packaging has instructions for downloading a digital or Ultraviolet copy of the season.

Suits Season Three continues to be a fun series so long as you don’t spend too much time thinking about it, although it is certainly showing its age at this point. The premise is now completely impossible, but the dialogue and plot twists are still clever enough to amuse a forgiving viewer most of the time. Fans of the show will enjoy this season set. More casual viewers may want to rent it. But I should throw in my usual caution that it would definitely help to have seen the earlier seasons to truly understand what is going on here. It is quite possible to just jump in with the top of the third season as they do have helpful recaps at the start of each episode, but the added history helps.