An affectionate nod to the alien invasion sci-fi yarns of the 1950s, Michael Laughlin’s Strange Invaders doesn’t always quite know when to wink and when to wince, but with a sterling cast of actors (names of the 1980s mixed with iconic actors from the 1950s and 1960s) and a genuinely striking production (made on a mere $5 million budget), Strange Invaders often elicits pure pleasure. The Twilight Time limited edition Blu-ray release brings the film into a high definition arena where its real positives can truly shine. 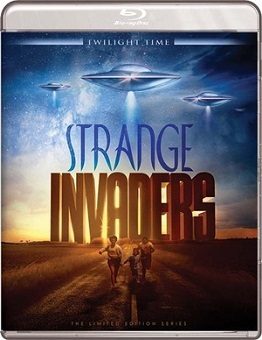 [Some spoilers are unavoidable in discussing the movie, so let the reader beware.]

After his ex-wife Margaret (Diana Scarwid) deposits their daughter Elizabeth (Lulu Sylbert) on his doorstep claiming a death in the family, Columbia University professor Charles Bigelow (Paul LeMat) becomes concerned when he doesn’t hear from her after four days. Leaving Elizabeth with his mother (June Lockhart), Charles travels to Centerville, Illinois, looking for Margaret but finding no trace of her nor anyone in town who has even heard of her. While in Centerville, however, Charles becomes convinced that there is an alien presence present when his dog vanishes mysteriously and his car blows up before his eyes, and upon returning to New York, he sees an article written by Betty Walker (Nancy Allen) in a tabloid rag on strange alien invaders. She admits she concocted the story from a picture of an alien and a letter sent to her by Willie Collins (Michael Lerner) who has been committed to an asylum for many years as a crackpot. When Margaret suddenly materializes, she comes with a warning that aliens are after their daughter which spurs Charles and Betty into action trying to prevent the abduction.

Director Michael Laughlin co-wrote the screenplay with (now) Oscar-winning writer-director Bill Condon, and the team fills their tale with tributes to many fondly remembered genre films of the 1950s (there’s even a wonderful moment when the switched-on television begins playing The Day the Earth Stood Still). The scenario has great fun leading the viewer down the path of nasty alien invaders only to switch things up later (some nods there to more then-current sci-fi hits like Close Encounters and E.T.), but it’s never made quite clear exactly why the aliens are so keen to take Elizabeth. Yes, we finally learn she’s part-alien and they’re taking her to their home, but they’ve had twenty-five years to study Earth’s humans (is she the only human-alien offspring in twenty-five years?), so their motivations are hazy and grow hazier still when she’s inevitably left behind at the conclusion of the movie. Michael Laughlin stages his scenes with thought and care without ever rushing to get to the next big set piece or special effect, and he’s selected some great extras who seem creepily alien without a drop of make-up. The inevitable alien make-ups, by the way, are stupendous and are among the highlights of the movie when the masks finally come off, especially considering the movie's modest budget. There are some continuity problems with night and day shots, but the sense of growing desperation is nicely sustained making the occasional gaffe rather insignificant.

All of the top-billed actors get into the spirit of the film’s fun mood and play their roles with earnest professionalism. Paul LeMat and Nancy Allen have good chemistry together, and Louise Fletcher who heads the National Center for U.F.O. Studies does a fine job with playing alternately scoffing and knowing with her part in the entire story never clear until the film’s denouement. Michael Lerner adds gravitas as the man locked away for twenty-five years for seeing too much and trying to tell others about it while Fiona Lewis as one of the chief alien presences is always arresting to watch, one of the many actors who convey other-worldliness without needing elaborate disguises to designate them as such. Wonderful character actors from days gone by like Charles Lane, June Lockhart, Mark Goddard, and especially Kenneth Tobey bring all of their hefty sci-fi credentials to bear on their roles, some tiny and some significant. It’s a shame that wonderful presences like Diana Scarwid and Wallace Shawn don’t have more extensive parts to play, but what they do act here is very enjoyable.

The film is presented in its original 2.35:1 widescreen theatrical aspect ratio and is offered in 1080p resolution using the AVC codec. Sharpness is pleasing rather than razor sharp, and some long shots seem a bit soft and indistinct. Contrast filters are erratic presences during the film’s presentation also occasionally affecting the sharpness quotient of the transfer. Color saturation is strong, however, with skin tones sometimes a bit too much but usually quite natural and appealing. Black levels are generally excellent. The transfer is surprisingly clean for a film of this vintage. The movie has been divided into 24 chapters.

The DTS-HD Master Audio 1.0 sound mix is typical of the era for a low budget production. There is some hiss present from time to time, but generally speaking, the dialogue has been recorded well and has been mixed with care with Oscar-winner John Addison’s appropriate background score and the spot-on sound effects for a sci-fi movie. Despite not having a dedicated LFE channel in the mix, there is a nice, rumbling bass when the alien mothership floats into view at the film’s beginning and at the end.

Audio Commentary: director-writer-producer Michael Laughlin and writer William (Bill) Condon each contribute comments about the production of the movie with their remarks edited into a coherent and surprisingly unified whole. Fans of the movie will be really interested in how things came together for the film to be made.

Six-Page Booklet: contains some entertaining color stills from the movie, original poster art on the back cover, and film historian Julie Kirgo’s enjoyable essay on the movie.

Strange Invaders has developed its own cult following over the years, so the opportunity to get their treasure in high definition should be a very tempting treat for the movie’s many fans. There are only 3,000 copies of this Blu-ray available. Those interested should go to www.screenarchives.com to see if product is still in stock. Information about the movie can also be found via their website at www.twilighttimemovies.com or via Facebook at www.facebook.com/twilighttimemovies.

Yes, thanks for the review. I've never seen it, so I bought it blind.

Edit: Now I'm in the mood, so I've avoided the spoilers above and am about to watch it now.

Love it! A fine discovery. Looking forward to listening to the commentary.
You must log in or register to reply here.