The monumental first steps in the gay liberation movement get a somewhat erratic treatment in Roland Emmerich’s Stonewall. In attempting to take a major event and personalize it through the eyes of a single participant, the film loses drive, focus, and clarity, and despite the best intentions of its director, its writer, and a hard-working cast, the results are spotty and unsatisfying. 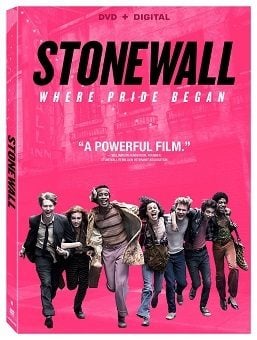 Amaray case in a slipcover

Driven from his small town Indiana home once his homosexuality becomes known, high school senior Danny Winters (Jeremy Irvine) heads to New York City’s Christopher Street to be among his own kind and try to feel comfortable in his own skin. But the mean streets of the Big Apple are merciless, and Danny at first finds it tough to fit in being beaten by cops after a raid on gay bar Stonewall and having to sleep in doorways and park benches until he can earn some money to support himself. A flamboyant clique of outcasts (Jonny Beauchamp, Otoja Abit, Richard Jutras, Vladimir Alexis, Ben Sullivan, Caleb Landry Jones) becomes his surrogate street family while Danny learns the ins and out of survival, but he longs for a settled life and knows that with conditions as they exist in 1969, it’s not likely to happen without some efforts to effect major changes in the perception and acceptance of gay people. Mattachine Society leader Trevor (Jonathan Rhys Meyers) offers a more peaceful brand of protest, but Danny’s rising fury at the injustice and mistreatment drive him to more forceful alternatives.

By focusing the story of the Stonewall riots around the (fictional) character of boy-next-door Danny Winters, screenwriter Jon Robin Baitz can’t possibly cover the width and depth of instability that was brewing in lower Manhattan during those turbulent months leading up to the four days of rioting in the summer of 1969. While it’s very clear that the writer’s heart rests with the flamboyant Ray/Ramona (Jonny Beauchamp) who turns tricks to earn pocket money and shoplifts when things are tight, we get frequent flashbacks to Danny’s unhappily closeted life at home and the discovery of his love affair with his coach/father’s (David Cubitt) star quarterback (Karl Glusman) that drives his father to toss him out of the house. The script is actually too dense with all of the varied characters in Indiana and especially in New York, any of whom might have made a more interesting central character than the bedazzled, naïve Danny, and yet his integration into this new world doesn’t get the attention it requires, so intent must the movie be in depicting the rampant police brutalities and the unfair practices of the Mob who own all the gay bars in the Village and who can overcharge and make demands on their clientele because the police have been paid off. While Roland Emmerich’s direction gets the right mood for the beginning of the riot, there are so many characters with their own agendas (an honest cop played by Matt Craven, a bullying bar manager and former wrestler played by Ron Perlman pimping for mobsters with money, the peace-loving Trevor who wants gays to gain rights by gentler means) that everyone and everything gets shortchanged, and with the four days of riot digested into a single night, the impact seems muted. So does a coda with Danny returning home after a year away mending fences where possible but once again being written off by his unforgiving father.

Jeremy Irvine does what he can with a poorly mapped-out character, and he does great hiding his British accent, but there’s just not enough interesting about Danny for the film to work with him as the central character. Jonny Beauchamp is the real deal as Ray, a character who in five minutes makes more of an impression on the viewer (sometimes as negative as he can be positive) than two hours with Irvine’s Danny. Joey King gives a spitfire performance as Danny’s younger sister Phoebe. Jonathan Rhys Meyers is solid as the well-meaning Trevor, and Joanne Vannicola offers a great gender-bending performance as fellow Mattachine Society member Sam. Ray’s fellow colorful street hustlers are given honest and believable performances in the hands of Vladimir Alexis, Otoja Abit, Richard Jutras, Ben Sullivan, and Caleb Landry Jones. David Cubitt and Andrea Frankle ring sadly true as Danny’s disapproving parents.

The film’s 2.40:1 theatrical aspect ratio is faithfully rendered in an anamorphic transfer that’s enhanced for widescreen televisions. Sharpness is only average to slightly above throughout the presentation, and color quality sometimes offers mushy, brownish-orange skin tones. Black levels are fine, and shadow detail is at acceptable levels, but this is not a strong standard definition transfer for a new film. The movie has been divided into 16 chapters.

The Dolby Digital 5.1 sound mix offers above average spread through the fronts and rears though Rob Simonsen’s background score and the period pop tunes are the major recipients of the surround treatment. Ambient atmospheric effects often get only stereophonic rather than surround treatment. Dialogue has been professionally recorded and has been placed in the center channel.

Into the Streets (2:13): various cast members comment on the importance of the film to director Roland Emmerich and praise his work with them to make it come to fruition.

Marsha P. (1:47): a very brief featurette with actor Otoja Abit commenting on the real-life character he played: Marsha P. Johnson who was known as the “Queen of Christopher Street.”

A missed opportunity to delve deeply and significantly into the beginnings of the gay liberation movement, Stonewall has far more valleys than peaks. Those interested in the subject matter will likely want to rent rather than purchase since the film isn’t fully satisfying either as drama or in its variable video quality.

I realize this movie was a flop and got very bad press, but I assumed it was high profile enough to warrant a Blu-ray release. Apparently not!

At some point I will watch this, maybe while I am not watching the Oscars for its similar lack of reflecting accurately the diviersity of the world.


A flawed indie film that I like that I suspect is a better representation is this earlier Stonewall film: 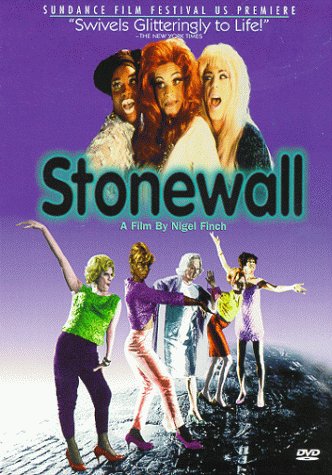