Step Up All In Blu-ray Review

The fifth film in the popular dance movie franchise doesn’t offer any surprises, but anyone stepping forward for another helping should know what they’re in for at this point. 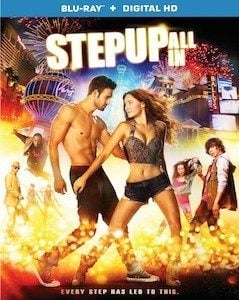 Step Up All In marks the fifth film in the Step Up franchise, which from the outset has made impressive dance sequences the priority over things like believable story, character and acting. All In doesn’t deviate from its four-film precedent, though compared to the previous entry (which All In is effectively a sequel to, though it brings back characters from earlier films), there are fewer incidents of laughable dialogue and wooden delivery. The dance sequences continue to be where the money gets spent with their combination of audacious choreography and set design and skilled performances by the dancers (many of whom viewers will recognize from the long running So You Think You Can Dance reality competition). Anyone watching a Step Up film by this point should know what they’re getting, and in that regard this latest movie doesn’t offer any surprises but neither does it disappoint.

The 1080p, AVC-encoded transfer is accurately framed at 1.78:1 and features a bright and colorful image with solid blacks and contrast. Detail is quite good as well and holds up from wide shots to close ups. Noise and other digital processing artifacts are minimal.

Dialogue in the Dolby Atmos surround mix, which is Dolby TrueHD compatible and is how my receiver processed the signal, is consistently clear and intelligibile. Surround activity can be fairly aggressive, though mostly with over-the-top whoosh effects and the EDM and hip hop soundtrack. The music also tends to generate most of the bass and LFE activity, which is pleasingly full and robust.

Lionsgate serves up a solid high definition presentation for the fifth Step Up dance film, another entry in the franchise that’s long on dance moves but short on quality story and acting. The special features are perfunctory, but viewers should appreciate the dances-only index that quickly gets to the reason anyone is interested in the film.

I don't know what they were thinking releasing this without 3D. The past 2 Step Up movies were excellent in 3D- I've ordered this one from the UK where it is in 3D.

Jesse Skeen said:
I don't know what they were thinking releasing this without 3D. The past 2 Step Up movies were excellent in 3D- I've ordered this one from the UK where it is in 3D.
Click to expand...

Do you know the region code?