Phil Joanou’s State of Grace is blessed with a dream cast acting some of the grittiest and most memorable characters of their respective careers. The film was completely overlooked upon its release in 1990, a year in which two little numbers called GoodFellas and The Godfather Part III were the crime drama films on everyone’s lips. Seen today, however, the story somewhat suggests the later Oscar-winning The Departed in terms of gritty story and antiheroic characters, told on a smaller scale, perhaps, but very affecting and quite memorable. 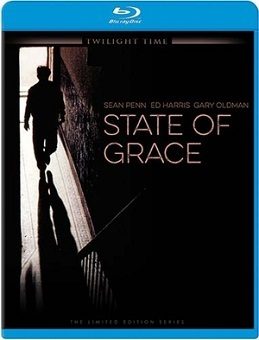 [The review below contains spoilers on certain events and revelations contained within the film.]

Having been away for a number of years, Terry Noonan (Sean Penn) returns to his Hell’s Kitchen turf and is affectionately welcomed back by former best friends Jackie Flannery (Gary Oldman) and Stevie McGuire (John C. Reilly). They’re a part of a small Irish mob run by Jackie’s older brother Frankie (Ed Harris) who’s trying to establish a significant Irish presence in the Bronx with Italian boss Borelli (Joe Viterelli) still running the show. It turns out, however, that Terry’s return to New York is no accident; he’s an undercover cop on assignment from Boston infiltrating the mob as best he can. The fact that these people he’s going to spy on are former friends of his really gnaws at his gut, and his guilt is intensified when he resumes a long ago love affair with Jackie and Frankie’s youngster sister Kathleen (Robin Wright). Terry does what he can to report on mob actions while trying to keep a tight grip on wild card Jackie, but when Stevie gets murdered and Jackie goes completely off the rails, Terry’s ability to conduct his operation without more spilled blood seems like an impossible task.

Dennis McIntyre’s original script (reworked by playwright David Rabe) creates a handful of memorable and doomed characters who in the hands of this supremely talented bunch of actors literally leap off of the screen, their every word and action seemingly part of their DNA making it unthinkable that anyone else could have played these parts. Phil Joanou’s homages to The Untouchables and The Wild Bunch are noticeable (that climactic shootout in the bar recalls both films after a fashion) but are not terribly derivative since the staging and shooting of the scenes is so exciting and kinetic. And then scenes like Terry and Jackie running through the fire they’ve just started in a warehouse or an out-of-nowhere free-for-all in a bar where punches get thrown and furniture destroyed seems so much like real life rather than reel life that we sit and stare in amazement at the truths being conveyed. If certain street-wise characters seem a little slower on the uptake than they should or if the camera lingers perhaps a little too lovingly on the stars as they fall in love on screen (and off: this is where Penn and Wright first met and were later married), these aren’t important lapses, and the film, despite its 2 ¼-hour running time, never dawdles for a moment, the perfect example of a long movie that doesn’t seem nearly as long as it is.

You’ll look a long time to find two more galvanizing leading performances in a crime film than the ones Sean Penn and especially Gary Oldman give in this movie. Both actors improvise freely and make such terrific choices that one would swear they’re telling their own life stories (and Oldman’s native accent never seeps into his Bronx brogue for a moment). Ed Harris offers yet another mesmerizing turn as the brother trying against overwhelming odds to get his motley Irish crew into shape. Robin Wright as the sibling trying desperately to separate herself from the crime life her brothers so enjoy is excellent, another stepping stone in a career trajectory for her that’s still riding high. John C. Reilly is affable as the tragic figure who spells the beginning of the end for the new Irish crew while R.D. Call as Frankie’s lieutenant says little but makes a most imposing impression. Tucked away in a tiny one-scene role is Burgess Meredith who offers a master class in acting as a pathetic old man behind on his loan payments. John Turturro as Terry’s cop contact and Joe Viterelli as the head of the Italian mob also make firm impressions.

The film’s 1.85:1 theatrical aspect ratio is presented in a 1080p transfer using the AVC codec. Apart from some infrequent but noticeable dust specks and some black levels which are occasionally mediocre, this is an outstanding transfer. Sharpness is very good throughout, and color is solid with blood reds come through particularly vividly and flesh tones seeming natural and real. Contrast for the most part is consistently maintained. The movie has been divided into 24 chapters.

The DTS-HD Master Audio 5.1 sound mix does a good to very good job making the picture come alive. Dialogue has been well recorded and has been placed in the center channel. Gunshots are expressive and get decent placement (though certainly more oriented toward the front soundstage). The legendary Ennio Morricone’s haunting, melancholy score gets a nice spread through the available channels through again, the rear soundstage doesn’t get nearly the attention of the front left, center, and right channels. No age-related artifacts cause any problems whatsoever.

Audio Commentary: producer Nick Redman and director Phil Joanou have an outstanding conversation about the making of the film with the director being particularly talkative and describing the idyllic conditions which he had on this film and never again. It’s a must listen for fans of the movie.

Six-Page Booklet: contains a wonderful selection of color stills, original poster art on the back cover, and film historian Julie Kirgo’s enthusiastic appraisal of the movie.

State of Grace is one of those wonderful gems that you probably missed at your neighborhood movie house back in the day (if it even arrived there at all) but which deserves to be rediscovered and celebrated as a wonderfully gritty and completely immersive character crime drama. There are only 3,000 copies of this Blu-ray available. Those interested should go to www.screenarchives.com to see if product is still in stock. Information about the movie can also be found via Facebook at www.facebook.com/twilighttimemovies.

I think Phil Joanou is a good director, who apparently has had some of the worst luck out there in terms of box office success and future opportunities. The first thing I saw that he was involved in was the documentary "U2: Rattle and Hum" which has some of the best black and white concert photography I've ever seen. Years later, he made a semi-autobiographical movie called "Entropy" that got an extremely limited release, but that I thought was actually pretty good. Glad to see that one of his movies has gotten a high quality release on Blu-ray.

One of my favorite crime flicks. Mine is on order.


You do know, the movie is clearly intended for Terry's true identity to be unknown at the beginning of the film. It's not like identifying Keyser Soze in a review, but the story is clearly intended for that fact to be revealed as the movie plays.n I'd say that's not the only spoiler in that one paragraph. Unfortunately, it's far too common to give things like this away in reviews. It's often right on the video package, but it still takes away from the first viewing.

I have no problem with adding a spoiler alert. I'll do it now.

My copy arrived in record time. Two days from Virgina to Colorado. Since it's my day off, I promptly watched it.


This movie has been a personal favorite for a long time and I'm sure I've seen it a dozen times. Thematically, it has a sort of tragic, "cycle of violence" theme that's reminiscent of "The Proposition" or "A History of Violence".


The picture is probably as good as it could possibly be, and better than I ever expected. It's a 25 year old movie & not exactly big budget, and that's what it looks like. The image is generally warm and desaturated, which I'm sure was intentional. The picture was even good enough for me to notice some selective focus that I don't recall noticing before. In general, I was extremely impressed. This was one of the last movies filmed by Jordan Cronenweth, and I think it would do him proud.

It's a solid entry in the Modern Gangster genre.

This film is of my all time favorites. Ennio Morricone is also one of my favorite composers. I didn't see this movie until 2000 on a movie channel on Christmas Eve. It started at midnight and I stayed up all night watching it. Wow!

Ed Harris, Sean Penn, Gary Oldman and John Tuturro...I couldn't believe this cast. These guys are all actors actors in my book. And they did not dissappoint.

I'm sure I have seen it a dozen times. The sound track is so hauting and melancholie. I am still drawn back into the movie by Morricone's masterful work.

A real winner. I will have to get a blu-ray copy.