joshEH said:
Not necessarily. Don't forget that the Earth has essentially been cut off from most of the greater galaxy for well over a century by this point, and that without the vitality of input from other Federation species, their opportunity for technological advancement would be greatly diminished (if not outright regressive) if they've been in retreat over the past 100 or so years.

Remember also that "The Burn" occurred very shortly after Captain Braxton's era (as depicted onscreen on VOY), and much of the technology glimpsed in this latest episode seems even more advanced than that era's own tech, so I had no problem buying a state of scientific inertia as having set in since the UFP's near-collapse, but with some of the tech still being just slightly ahead of the U.S.S. Relativity's.
Click to expand...

I need to watch that Voyager episode, I haven't seen it yet.

Question, what was the time period the temporal agent showed Archer in Enterprise, with the battle being fought against the Sphere Builders in the future? I think he gets a Zindi religious icon from that time period in that scene? Or maybe that was a different flash.

Also, when we saw stuff scrolling in the future DB that Archer could pull up, what was the maximum century/year mentioned?

Its Star Trek. Let me know when there aren't plot holes big enough to fly a Doomsday Machine through.

Philip Verdieck said:
Question, what was the time period the temporal agent showed Archer in Enterprise, with the battle being fought against the Sphere Builders in the future? I think he gets a Zindi religious icon from that time period in that scene? Or maybe that was a different flash.
Click to expand...

The 26th Century (the Battle of Procyon V), but an alternate version where the Delphic Expanse had grown to such an extent that it had engulfed Vulcan by that point in time. Also, it should be noted, Agent Daniels isn't from the main Prime-timeline, since he was unfamiliar with certain events that happened in ENT which led to the formation of the Prime-timeline as we know it (including TOS and TNG).

He's from a potential future (a 31st Century) that's slightly different from Prime, and therefore possibly one where "The Burn" either didn't occur, or else took place in a different form from what we've seen on DSC.


Philip Verdieck said:
Also, when we saw stuff scrolling in the future DB that Archer could pull up, what was the maximum century/year mentioned?
Click to expand... 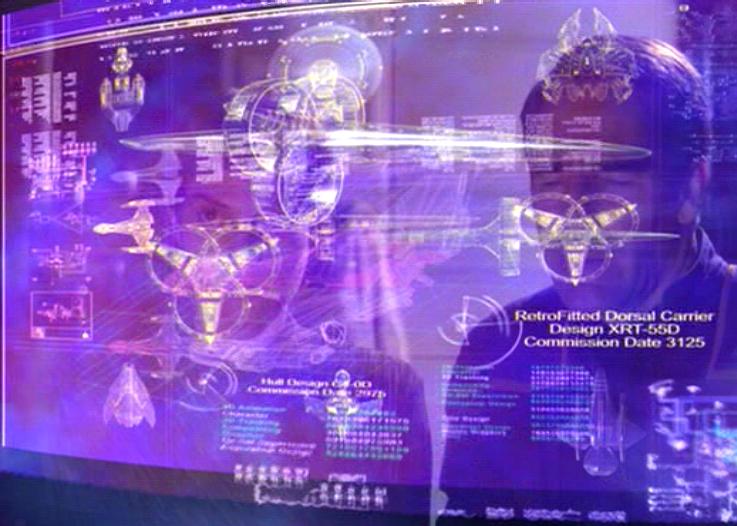 The retrofitted dorsal carrier was a type of starship built in the future. The design number XRT-55D was connected to this carrier, with at least one commissioned in the year 3125. It appeared in the database owned by Daniels. (ENT: "Future Tense")

(Although, again, this ship is probably from the alternate future known to Agent Daniels, not the "Prime" 32nd Century seen on DSC.)
Last edited: Oct 31, 2020

Sam Favate said:
I liked the episode but I thought it strained credibility that these people from 1000 years ago who showed up 5 minutes ago were able to settle a dispute that had been going on for a very long time. If people from 1000 years ago showed up in 2020, we'd talk to them like cavemen and not give their opinions the time of day, since they're obviously disconnected from the world in which we live and can't possibly understand the circumstances that brought us to where we are.

1000 years is a really long time. The technology would have advanced way beyond what the crew of Discovery could imagine.
Click to expand...

Like cavemen? A thousand years ago from 2020 is the time of William the Conquerer. Sure, in terms of society, culture, and technology, considerably behind us, but nothing like "cavemen".

I am not seeing all the Ready Room eps.
Click to expand...

If you can't find them through the app you're using, CBS All Access has been posting them to its YouTube channel as well. So if you have the YouTube app on your streaming device, you can watch them all there.

TonyD said:
well I’ve never in my life heard a human referred to as binary or NonBinary.

I just don’t understand what that means.
Click to expand...

It just means the person doesn't self-identify as male or female. They just self-identify as human. They may be genetically male (XY) or female (XX), but like transgender people, they don't identify themselves according to their chromosomes.

OMG, my head is spinning trying to understand all the ST stuff being discussed. Which future, when is it, what starships, etc. I think I’m gonna take a Valium and lay down.

Johnny Angell said:
OMG, my head is spinning trying to understand all the ST stuff being discussed. Which future, when is it, what starships, etc. I think I’m gonna take a Valium and lay down.

When I feel that way I just forget everything and simply sit down and watch the show. It either entertains or it doesn't. And so far this season I am entertained with no loss of hair from pulling it out.

It’s an interesting exercise to try to imagine what life was like 900 years ago and 900 years ahead. To someone from 900 years ago, I’d think they would think we are like gods or use magic. Because we have so much technology to allow so much. And in the future, I’d think the technology is way beyond what we can imagine today, it would seem like magic to us.

I can see someone from 900 years ago may dispense some wisdom we might not see. Or would suppress or dismiss from the masses.

Watching this season has me thinking of HG Wells The Time Machine and Planet of the Apes. In both scenarios, our hero(s) arrives in a new land that is so totally foreign to him. And he tries to insert his way of thinking because what he finds is totally backwards!

Philip Verdieck said:
I need to watch that Voyager episode, I haven't seen it yet
Click to expand...

Which ep is this?

jayembee said:
Like cavemen? A thousand years ago from 2020 is the time of William the Conquerer. Sure, in terms of society, culture, and technology, considerably behind us, but nothing like "cavemen".
Click to expand...

TonyD said:
Which ep is this?
Click to expand...

Scotty had no idea what it was in Relics, and there is no way a drinker like him wouldn't have known of its existence.

I didn't think you meant it literally, but even metaphorically, it's a stretch. The folks of 1000 years ago might see us as possessed of magic, but the basic understanding of how to live together as a society, as well as communication with "foreigners", was pretty similar. Even technology, while obviously primitive relative to us, was understood to some extent (water wheels, grain mills, etc.). So while they may be completely floored at the idea of flying "carts" or weapons of light, or curing sickness by poking one's skin, the concept of making something out of the materials around them to make work easier was something that they clearly understood.

With space travel all over the galaxy taking place, and the time displacements that would cause, wouldn't many many people be on different "timelines", making it hard to say what modern actually is?

TJPC said:
With space travel all over the galaxy taking place, and the time displacements that would cause, wouldn't many many people be on different "timelines", making it hard to say what modern actually is?
Click to expand...

No. Relativistic time effects from FTL don't exist in Star Trek. It's too much of a pain to work with. If it's ever people from an older time, it's time travel, stasis or a backwards planet.

"Warp" is just the FTL method Star Trek uses that has no relativistic effect.

My understanding, such as it is, has been that the warp drive creates a field inside which a bubble of subspace is preserved in which normal matter/gravity/time/etc. continue to exist. Outside the bubble, space distorts/warps as it interacts with the field, with the space ahead contracting and the space behind expanding so that the bubble is perceived to be traveling many multitudes of the speed of light.

By contrast, impulse drives are basically fusion-powered rockets and provide actual propulsion rather than apparent propulsion. I think I read somewhere that full impulse power is roughly a quarter of the speed of light, or around 46,500 miles per second. At that speed, roughly 1.03 seconds would be perceived to have gone by for every 1 second aboard the starship -- roughly two extra seconds every minute. If a starship was traveling at full impulse for a full 24 hours, that would still only result in a roughly 48 minute discrepancy between the starship's time and the observed time. Starships on Trek shows tend to be traveling at full impulse for far less time than 24 hours, so the relativistic effects are so small as to be negligible. Presumably every time a starship comes out of warp in Federation space, it can contact a data source and recalibrate its internal clock with the objective accounting of time.
You must log in or register to reply here.