Three Oscar winners and a two-time Emmy winner contribute mightily to the entertainment quotient of Fisher Stevens’ Stand Up Guys. A bittersweet look at career criminals at the ends of their careers refusing adamantly to gently into that good night, Stand Up Guys is strong on characterization but occasionally light on engaging plot. Sometimes it’s enough to simply plop three of America’s finest actors into a car or onto a street and turn on the camera. They offer a master class on movie acting. 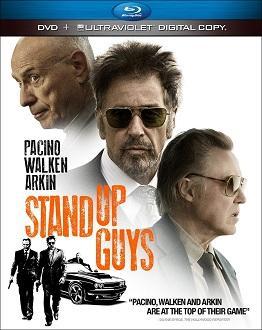 After serving twenty-eight years in prison for his last job (in which he kept the names of his cohorts to himself), Val (Al Pacino) is met upon his release by his best friend from the old days Doc (Christopher Walken) and is ready to kick up his heels a little. Doc has been commanded by boss man Claphands (Mark Margolis) that he must execute Val since Val was responsible for the accidental shooting of Claphands’ only son. Doc is determined to give Val one happy day of freedom before bumping him off, and the two of them along with their old getaway driver Hirsch (Alan Arkin) whom they spring from an old folks home have a series of adventures during a lengthy evening of entertainment (breaking and entering, car theft, a few trips to the local whorehouse, a high speed chase with the police, and a couple of violent encounters with some local punks) that reminds Doc how empty his life as been without Val’s extroverted sense of adventure to spur him on.While Noah Haidle’s screenplay has some rather obvious jokes unworthy of the company (Val’s taking a handful of Viagra to assure himself an erection; Val’s snorting a bunch of crushed prescription drugs for cataracts and hypertension in order to get high), the real kick to the film is seeing these three icons of the cinema acting together for the first time. Their camaraderie is infectious even when the script lets them down. Director Fisher Stevens obviously has such respect and affection for them that he allows the camera to catch all of these character moments between them and makes them memorable: Val’s demanding Hirsch’s pants to give to a naked girl in the trunk of a car they’ve stolen, Val punching out a snotty bodega clerk, and Val and Doc handling weapons with the expertise which their enemies hadn’t counted on given their age. And of course, the film’s highlight, a high speed chase around this unnamed city (filmed in Los Angeles but the streets and sidewalks seem too empty for it to be a fictional LA counterpart even in the middle of the night) with the police in hot pursuit, is a tonic with Alan Arkin’s mild mannered Hirsch a veritable speed demon/stunt driver behind the wheel. Things turn more serious as the film runs as tragedies occur and Doc must make his final decision about killing Val or not. The ending is satisfying in a Butch Cassidy kind of way; the stand up guys end up doing just that.Al Pacino has the showiest role, but he doesn’t go completely overboard with it as he has tended to do with many performances in the latter part of his career. He’s appealing and completely believable as the career crook who wants to have a blast after being released from prison after such a long stay. Christopher Walken is the quieter, more introspective member of the gang, but that doesn’t stop him from doing what needs to be done when the situation is ripe for action. It’s an interesting, reflective performance. Alan Arkin’s role is much smaller, but he makes the most of his few scenes suggesting an animal beneath his meek and sickly shell. Julianna Margulies plays his daughter, again a small role but an important one for a couple of key sequences in the movie. Mark Margolis plays the mob boss we’ve seen him perform dozens of times on film and on television, but Lucy Punch as the youthful wide-eyed madam of their favorite old whorehouse is a delight.

The film’s 2.40:1 theatrical aspect ratio is faithfully rendered in a 1080p transfer using the AVC codec. Contrast is superb and sharpness exemplary in this outstanding transfer with terrific black levels and sublime shadow detail, important since the majority of the film occurs during the night and early morning hours. Color saturation levels are rich with believable flesh tones. The film has been divided into 16 chapters.

The DTS-HD Master Audio 5.1 sound mix is impressive for a low budget effort. Cleverly disguising the sometimes lack of split effects in the car chase scenes by laying plaintive new tunes by Jon Bon Jovi over those sequences on the soundtrack, the film uses its surround soundstage most effectively with the music, both songs and the background score by Lyle Workman. Dialogue, a key component of this film, has been nicely recorded and has been placed in the center channel.

A bittersweet tale of elderly mob guys on a final fling, Stand Up Guys offers impressive acting from its trio of male leads and enough fun and sentiment to warrant at least a rental. The wonderful video and audio quality of the Blu-ray increases the value of this release.