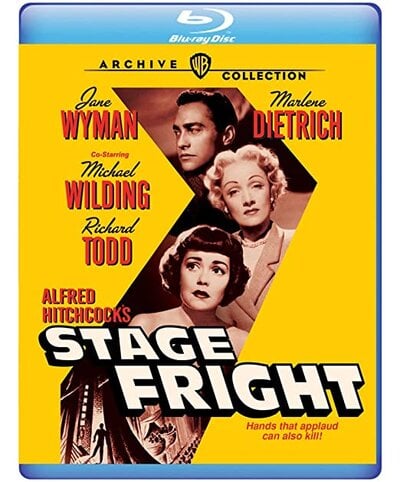 COMING IN JANUARY 2022!
Newly remastered for Blu-ray from a 4K Scan of the original nitrate camera negative!

In Alfred Hitchcock’s world, theaters are where danger stalks the wings, characters are not what they seem, and that “final curtain” can drop any second. The droll Stage Fright springs from that entertaining tradition. Jane Wyman plays drama student Eve Gill, who tries to clear a friend (Richard Todd) being framed for murder by becoming the maid of flamboyant stage star Charlotte Inwood (Marlene Dietrich). Filming in his native England, Hitchcock merrily juggles elements of humor and whodunit and puts a game ensemble (Alistair Sim, Sybil Thorndike, Joyce Grenfell, Kay Walsh and daughter Patricia Hitchcock) through its paces. No one turns a theatre into a bastion of dread like Hitchcock, and Stage Fright is proof positive. (Pictured below, Hitchcock in a rare behind-the-scenes photo with stars Marlene Dietrich and Jane Wyman)

Alright!!! - another “missing” Hitchcock in HD at last!

Will the next one be Mr. and Mrs. Smith?

bujaki said:
Will the next one be Mr. and Mrs. Smith?
Click to expand...

Would this complete Hitch's complete output of his U.S. productions on BD?

bujaki said:
Would this complete Hitch's complete output of his U.S. productions on BD?
Click to expand...

I’m not 100% sure but if not it would be darn close. I think that’s the last remaining one that Warner has rights to.

This is great news. I love this movie!

Spellbound is technically out of print. Not sure whatever happened to the alleged Criterion release…

bujaki said:
Would this complete Hitch's complete output of his U.S. productions on BD?
Click to expand...

Josh Steinberg said:
I’m not 100% sure but if not it would be darn close. I think that’s the last remaining one that Warner has rights to.
Click to expand...

Mr & Mrs. Smith would be the last full length American film not released on Blu-ray.

This is a delightful surprise.

Really happy about this announcement. Unlike many folks, I really like Stage Fright and find it one of his most effective films of this period (a decided LEAP in quality over his previous film Under Capricorn). Jane Wyman is the weak link; just an average performance from her surrounded by really interesting work from her co-stars, and Dietrich walks away with the picture.

Matt Hough said:
Dietrich walks away with the picture.
Click to expand... Excellent news - another Dietrich blu to add to the collection!

"Newly remastered for Blu-ray from a 4K Scan of the original nitrate camera negative!"

This is great news. I was wondering if the OCN existed for Stage Fright. It should look fantastic. According to a bio of Hitchcock I once read, Dietrich took charge of her own make-up and even lighting. On set people wondered if Hitchcock would put up with that, but he completely deferred to Dietrich as a master of what she was doing. One of the final shots of her taken from above in extreme close-up, with smoke swirling from her cigarette and her eyes doing something I can't even describe, is haunting.

I laugh every time when Charlotte Inwood says: "Oh, darling, don't confide in me. Pour some tea will you."

"Stop acting like a silly school girl! The only murderer here is the Orchestra Leader." Was this not already on Blu-ray? I watched last year - perhaps I watched the DVD?

haineshisway said:
Was this not already on Blu-ray? I watched last year - perhaps I watched the DVD?
Click to expand...

I Confess has been on Blu-ray for awhile but not Stage Fright.
You must log in or register to reply here.

Blu-ray Review A Few Words About A few words about...™ Stage Fright -- in Blu-ray