After a couple of recent comedy misfires, Melissa McCarthy is back on top with Spy, the latest collaboration with writer-director Paul Feig who did wonders for her movie career with Bridesmaids and The Heat. Spy is not a spoof of the spy film genre but rather a fast-paced action comedy which pairs its star with a brilliant cast of comic actors (and one notorious action star who deadpans his way through the film to produce comic gold). With both the theatrical and unrated cuts available in this Blu-ray package, it’s a winner. 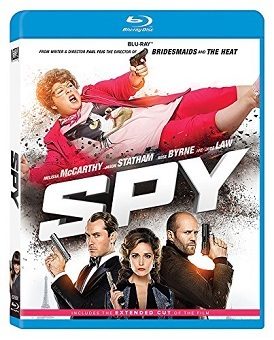 Although a trained and talented special agent for the CIA, lately Susan Cooper (Melissa McCarthy) has been serving as a lowly analyst being the eyes and ears for successful spy Bradley Fine (Jude Law). But when Fine is taken out of commission on the trail of a stolen nuclear weapon being auctioned on the black market by jet setting terrorist Rayna Boyanov (Rose Byrne), she volunteers to her boss Elaine Crocker (Allison Janney) to undertake the mission since her face won’t be known by Rayna who seems to know all of the CIA’s top agents. Super agent Rick Ford (Jason Statham) is so outraged that a woman is being sent into the field over him that he walks out of the CIA to become a rogue agent. Susan’s mission to connect with Rayna takes her from Paris to Rome to Budapest eventually latching on to her by pretending to be a security guard hired by her father for her protection, but her efforts are constantly undermined by well-meaning best friend Nancy Artingstall (Miranda Hart) who has tagged along on the mission and by the ever-intrusive Rick Ford who is determined to be the one to recover that missing nuke.

Writer-director Paul Feig has loaded his film with nutty physical comedy (the lowly CIA analysts are condemned to basement quarters infested with rats and bats; there is lots of sexual innuendo and awkward sexual intimacy), motormouth speak (Jason Statham’s entire role is an almost endless monologue of his increasingly outrageous achievements intended to intimidate Susan into giving up and letting him handle the case), and insult comedy of the highest order (Rayna never met a Susan outfit that she could tolerate, and once Susan drops her mousy persona, she can dish the dirt with the best of them). He’s also surrounded his stars with wildly inventive comic actors who bounce words and actions off them to wonderful effect usually in just a scene or two: a poker-faced gadget expert (think Q from the 007 films) Patrick (Michael McDonald), Rayna’s sensitive Swedish companion Anton (Björn Gustafsson), a lethal flight attendant named Frederick whom everyone keeps calling Colin (Mitch Silpa). This kind of nuttiness that extends from the top down is what keeps the joie de vivre sparkling throughout the film’s overly generous two hours (and the unrated version runs ten minutes longer). Director Feig keeps the comedy percolating but also doesn’t stint on action with the introductory Bond-like escape sequence (that and the inventive main title sequence wouldn’t be out of place in any Bond movie) and a kitchen fight involving Melissa McCarthy both being superb examples of sustaining action without it going on too long.

Melissa McCarthy has a field day with her role getting to be as glamorous, ordinary, or frumpy as her disguises and aliases require and performing physical and verbal comedy with the kind of élan that brought her an Oscar nomination and an Emmy Award. Rose Byrne is likewise superb as the haughty arms dealer with a mile-high hairdo and a demeanor that makes everyone else in the world her underling. Jude Law looks to be having the time of his life as a James Bond substitute in the early scenes while Jason Statham trades hilariously on his reputation as an action star by consistently bragging about his heroic exploits while managing to mess up every action moment in which he finds himself. Peter Serafinowicz as Italian Aldo whom Susan must fend off numerous times once she makes his acquaintance proves the film’s supporting MVP, an inventive comic performance that’s a delight from beginning to end. Miranda Hart’s nattering BFF may get a little tiresome over the long haul, but wonderful actors like Allison Janney, Morena Baccarin (a glamorous CIA agent whose ease with her job makes McCarthy and Hart’s characters envious), and Bobby Cannavale (as arms buyer Sergio de Luca) are welcome presences even with their limited time on screen.

Filmed digitally, the movie’s 2.39:1 theatrical aspect ratio is faithfully presented in a 1080p transfer using the AVC codec. This is a gorgeous picture from beginning to end with outstanding sharpness and winning detail (so detailed that some awkward CGI wire removal seems obvious during the helicopter finale), color that’s notably rich and accurate, and contrast which has been dialed to perfection. Black levels are also beautifully deep. The movie has been divided into 32 chapters.

The DTS-HD Master Audio 7.1 sound mix is admirably busy for a comedy feature. The action elements of the movie get wonderfully realized with the split atmospheric effects which occasionally pan across and through the soundstage. Theodore Shapiro’s background score gets a rich and expansive placement through the entire soundstage. Dialogue has been expertly recorded and has been placed in the center channel.

Extended Unrated Version of the Film (2:10: 22, HD): selectable in the “Play” menu.
Unique Menu: Fox Home Entertainment designers went above and beyond the call of duty to design a unique and entertaining main menu for the disc. Users may wish to pause and enjoy their efforts before making a selection.
Audio Commentary: writer-director-producer Paul Feig welcomes his director of photography Robert Yeoman, co-producer Jessie Henderson, and fight coordinator Walter Garcia to share the track with him. It’s a lively discussion of the memorable time they had making the movie, and the pride of the participants is easy to hear by their enthusiasm about the project and its personnel.
Redacted Scenes (3:13, HD): three scenes may be watched separately or in montage.
Alternate Scenes (31:51, HD): fifteen scenes with additional dialogue cut from the scene for the theatrical version are presented either separately or in montage.

Behind-the-Scenes Gag Reel (3:43)
Outtakes (HD): Because Paul Feig not only directed but also wrote the script, he continuously ad-libbed lines during filming tossing them off the cuff or writing them on post-it notes for the actors to perform. The following featurettes show the enormous body of improvised material by the writer-director and the cast:

How Spy Was Made (HD)Gallery: thirty color pictures on and off set may be stepped-through.

Spy is one of the more bracing comedies of 2015. With a great cast of actors and fast-paced action punctuated regularly with big laughs, the movie is heartily recommended. Picture and sound quality of the Blu-ray release are certainly top-notch!

I've been waiting for this one. It was already a must buy because of my wife, but glad to see I will be enjoying it too!

My wife and I took a chance with this film over a month ago when it was booked as part of a "Grand Opening" for the Irvine Spectrum's remodeled VIP recliner screens, and we both laughed throughout much of the movie. Although I wonder if Fox shipped the unrated version to the theatre, because there was some pretty raunchy stuff that took me by surprise.

Todd Erwin said:
My wife and I took a chance with this film over a month ago when it was booked as part of a "Grand Opening" for the Irvine Spectrum's remodeled VIP recliner screens, and we both laughed throughout much of the movie. Although I wonder if Fox shipped the unrated version to the theatre, because there was some pretty raunchy stuff that took me by surprise.
Click to expand...

I watched the unrated cut for the purposes of the review, and I think it had more uses of the "f-word" than have been present in any Quentin Tarantino movie. I meant to mention the overuse of salty language in the review, but after awhile, one gets accustomed to its constant use.

Is it just me, or does $40 MSRP seem kind of high for this sort of mainstream release?

Aaron Silverman said:
Is it just me, or does $40 MSRP seem kind of high for this sort of mainstream release?
Click to expand...

That's pretty standard pricing from Fox for their new releases of current films.

Thanks Matt, great review!!
You must log in or register to reply here.