DreamWorks Animation’s Spirit: Stallion of the Cimarron was one of the last traditional 2D animated features to come from a major studio. It is also one of the most beautiful and entertaining to come from the studio, despite its disappointing performance at the box office ($73 million domestic gross vs. $80 million budget). 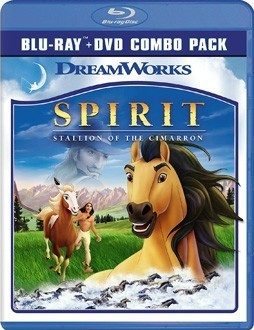 Spirit: Stallion of the Cimarron tells the tale of a young wild mustang who, as he grows up, becomes the leader of his herd. He has a lot of curiosity, which leads him to investigate a group of “two-legs” sleeping next to a campfire one evening. He mistakenly awakens them, is captured, and taken to a cavalry outpost led by The Colonel (voiced by James Cromwell), who is determined to break the horse’s spirit and ride him as his own. But Spirit is determined to remain wild, and manages to escape with the help of a captured Lakota, Little Creek (voiced by Daniel Studi). When they arrive at his village, Little Creek tries to tame Spirit thru kindness and the possibility of mating with his painted mare, Rain. This is stopped short when The Colonel arrives with troops who attack the village. Little Creek, Rain, and Spirit escape, but Spirit is eventually recaptured by The Colonel, and sent off to help with building the Transcontinental Railroad. Little Creek sets off to try and save Spirit again, leading to a showdown and chase through the mountainous western terrain with The Colonel and his troops.You’ll notice that not once in my summary did I mention any voice talent for Spirit or Rain, the two horses the story centers around. Spirit: Stallion of the Cimarron takes a chance by not allowing the animals to speak as humans. The movie, however, does use anthropomorphism on these animals in the forms of facial expressions, which would be difficult not to do as a way of expressing emotions, and as an audience member, I’m willing to give the animators some lead way there. Essentially, the story is told thru Spirit’s eyes with narration by Matt Damon and songs by Bryan Adams, with help from a music score composed by Hans Zimmer. The rock and roll songs by Adams may seem out of place for a film set in the 19th century Old West, but the lyrics and rhythm fit the animation and storyline. The film also contains some breathtaking animated set pieces, such as the opening flight with an eagle soaring along the midwestern landscape, Spirit’s dream sequence as he’s being shipped to the railroad construction site, his eventual escape from hauling the locomotive uphill, and the climactic chase through the mountains. It’s hard to believe Spirit: Stallion of the Cimarron was cut from the same cloth as Shrek and Madagascar.

The 1080p AVC-encoded transfer retains the film’s original 2.35:1 theatrical aspect ratio, with vivid colors, excellent contrast (including deep blacks), and exquisite detail. Purists may complain about the lack of film grain in this transfer, but the movie was created within the digital realm, therefore grain would be virtually non-existent. The transfer does exhibit a cinematic, film-like look, nonetheless.

The Dolby TrueHD 5.1 track provides clear dialogue, a wide dynamic range benefitting the music in the film, and a solid low-end that helps replicate the feel of a stampede. The film contains some great surround effects, and the lossless track recreates them with discrete separation, helping to immerse the viewer. This is a wonderful Dolby TrueHD track!

The special features from the DVD release have been ported over for this Blu-ray.Filmmaker’s Commentary: Producer Mireille Soria joins directors Kelly Asbury and Lorna Cook as they discuss the making of the film.Learn to Draw Spirit with James Baxter (480i; 13:48): Animator James Baxter shows kids how to draw Spirit.Animating Spirit (480i; 7:02): Standard EPK piece on how the film was animated using a combination of hand drawings and computer animation.The Songs of Spirit: Stallion of the Cimarron (480i; 9:41): Another EPK-style piece on the music, featuring interviews with Hans Zimmer and Bryan Adams.Storyboards (480i; 16:51): Four sets of storyboard sequences are provided, with optional commentary.International Star Talent (480i; 2:31): A very brief EPK piece on some of the voice talent used for other markets where the film was released.DVD Copy: The original 2002 DVD is included, with all of the same bonus features as the Blu-ray, plus the typical (for the time) text-based production notes and filmographies, trailer for other DreamWorks Animation titles, and two “Set Top Games.”

Fans of animation will be pleased that Spirit: Stallion of the Cimarron has finally made its way to Blu-ray, with a wonderful audio and video presentation. It’s an often over-looked film that is perfect for young and old alike.

Todd Erwin said:
Video Rating: 4.5/5 3D Rating: NA
The 1080p AVC-encoded transfer retains the film’s original 2.35:1 theatrical aspect ratio, with vivid colors, excellent contrast (including deep blacks), and exquisite detail. Purists may complain about the lack of film grain in this transfer, but the movie was created within the digital realm, therefore grain would be virtually non-existent. The transfer does exhibit a cinematic, film-like look, nonetheless.
Click to expand...

Purists probably know that but what some may not know is that adding a small amount of grain to these digitally animated films helps eliminate banding, that's a problem due to blu ray using 8 bit for colour and it tends to show up on animated films more, it's why they added a small amount to The Lion King in some scenes, technically the correct term would have been dither.
You must log in or register to reply here.