are perfect together, and absolutely hilarious. ~ Eric Eisenberg, CINEMABLEND 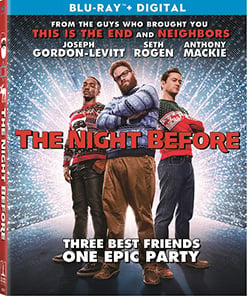 Loaded with Bonus Materials, Including a Cast Gag Reel,

CULVER CITY, Calif. (Jan. 11, 2015)  Joseph Gordon-Levitt (The Walk), Seth Rogen (This is the End) and Anthony Mackie (Avengers: Age of Ultron) star in the R-rated comedy THE NIGHT BEFORE, debuting on Digital Feb. 9 and on Blu-ray and DVD Mar. 1 from Sony Pictures Home Entertainment. The story follows three best friends who set out for one last wild night of debauchery before settling down into adulthood. The cast also features Lizzy Caplan (Masters of Sex), Jillian Bell (22 Jump Street), Mindy Kaling (The Mindy Project) and
Michael Shannon (Boardwalk Empire).

Bonus content on the Blu-ray, DVD and Digital HD releases include a gag reel where Seth Rogen and the rest of the cast struggle to keep it together while delivering some truly hilarious lines; 20 minutes of on-set shenanigans in the featurette Making One Epic Party; and viewers take an extended look at the strip club scenes with Jillian Bell and Seth Rogen almost unable to get through a take without laughing in Whale Juice. The Blu-ray and Digital exclusive bonus content include deleted and extended scenes, as well as more, more, more glorious moments with the one and only Mr. Green in Mr. Green Line-O-Rama.

Ethan (Joseph Gordon-Levitt), Isaac (Seth Rogen) and Chris (Anthony Mackie) have been friends since childhood, and for a decade, their yearly Christmas Eve reunion has been an annual night of debauchery and hilarity. Now that they're entering adulthood, the tradition is coming to an end, and to make it as memorable as possible, they set out to find the Nutcracka Ball - the Holy Grail of Christmas parties.

o   The Spirit of Christmas

o   Drunkest Santas on The Block

§  Christmas in the Summer Featurette

THE NIGHT BEFORE has a run time of approximately 101 minutes and is rated R for drug use and language throughout, some strong sexual content and graphic nudity.

* Digital Extras only available with iTunes Extras and Vudu Extras+