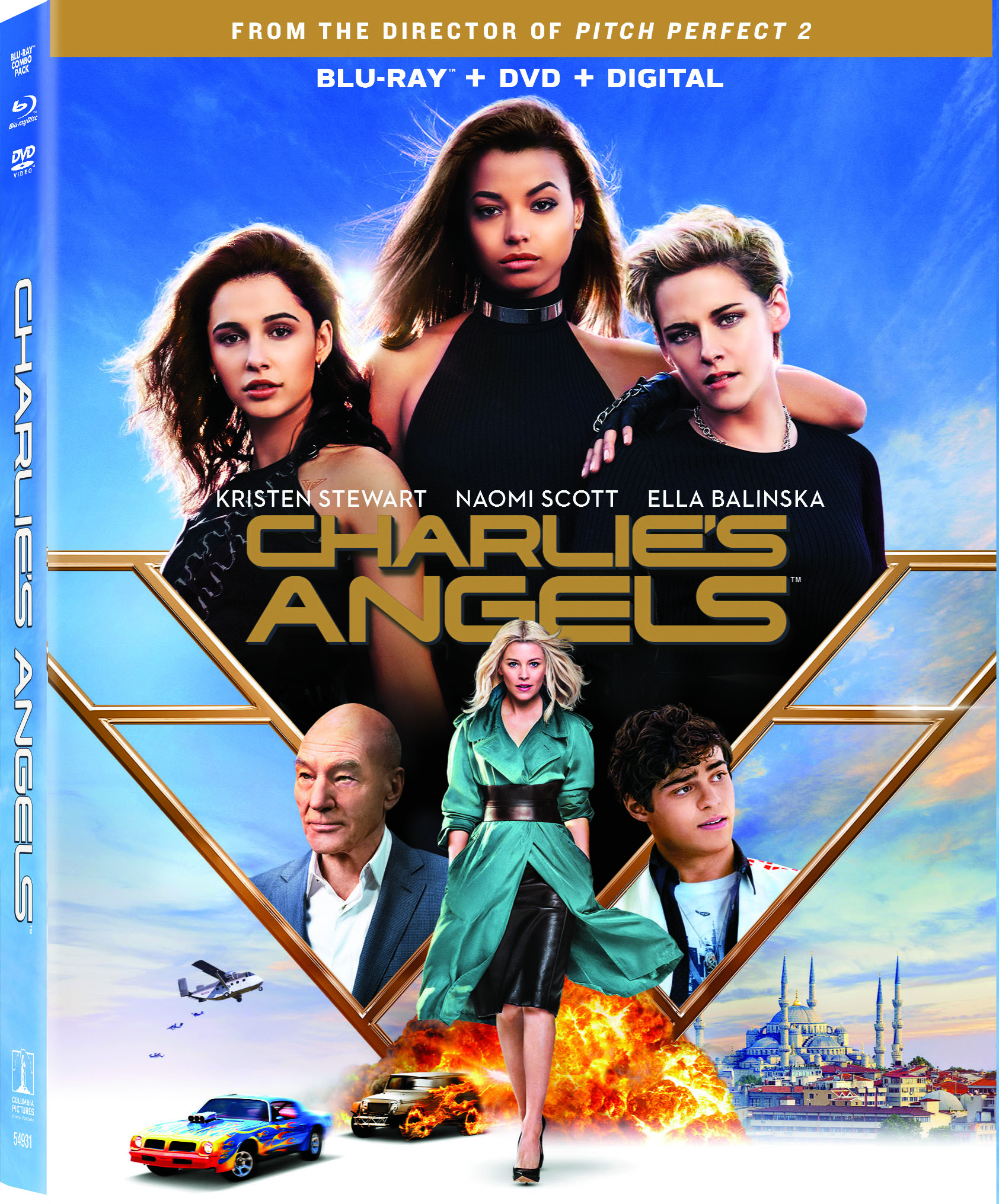 Joining the Angels on their secret, world-saving mission are Djimon Hounsou (Blood Diamond), Sam Claflin (The Hunger Games: Catching Fire), Noah Centineo (To All The Boys I’ve Loved Before), and Patrick Stewart (Logan).

Director Elizabeth Banks takes the helm as the next generation of fearless Charlie’s Angels take flight. In Banks’ bold vision, Kristen Stewart (Sabina), Naomi Scott (Elena), and Ella Balinska (Jane) are working for the mysterious Charles Townsend, whose investigative agency has expanded internationally. The new Angels are among the world’s smartest, bravest, and most highly trained women all over the globe. Under the guidance of Bosley (Elizabeth Banks), the Angels have to protect a revolutionary technology from becoming weaponized. They will have to rely on each other as their assignment becomes increasingly treacherous and even those closest to them can no longer be trusted.

The CHARLIE’S ANGELS bonus materials include a hilarious gag reel, five deleted scenes, and four making-of featurettes with never-before-seen cast and crew interviews. Dive deep into the stunning costume design, high-octane stunt sequences, and learn how the stars bonded on set to form their own Angels’ sisterhood!

Sony Pictures Home Entertainment has partnered with Travelzoo, the leading global provider of insider travel deals and one-of-a-kind experiences, to create the Squad Goals Getaway. In the spirit of celebrating friendship, the lucky winner of this sweepstakes and two of their closest friends will win a weekend in Sonoma, complete with brunch and a spa. Travelzoo has also curated Charlie’s Angels-themed getaways, featuring travel destinations that the Angels visit in the movie.

An awful movie with a few good scenes in it, but still not even a mediocre film.

Robert Crawford said:
An awful movie with a few good scenes in it, but still not even a mediocre film.
Click to expand...

Even with the bad reviews, I wanted to see it IMAX since I feel I'm getting my "best value" out of my A-List membership when I use it for IMAX and Dolby and 3D.

A friend who has A-list as well agreed to go to a movie. I told her I had planned on "Angels" but we could see something else - heck I encouraged her to pick something else since I knew about the film's poor reaction.

She said "Angels" was fine with her.

Afterward she blamed me for making her see it!

Another reboot that no one asked for. None of the Angels have the glamour or charisma of the originals.

skylark68 said:
Another reboot that no one asked for. None of the Angels have the glamour or charisma of the originals.
Click to expand...

To be fair, no one asked for the 2000 reboot either, and that turned out pretty well.

Heck, who asks for any reboots?

Shame it wasn't made with Jessica Chastain, Emily Blunt and Anne Hathaway. Would have needed a bigger budget though!

Keith Cobby said:
Shame it wasn't made with Jessica Chastain, Emily Blunt and Anne Hathaway. Would have needed a bigger budget though!
Click to expand...

They would've been seen as too old.

Not old, of course, but I think they wanted more youth involved...
You must log in or register to reply here.