AVAILABLE FOR THE FIRST TIME ON 4K ULTRA HD™ MAY 4TH

WITH HOURS OF BEHIND-THE-SCENES BONUS MATERIALS 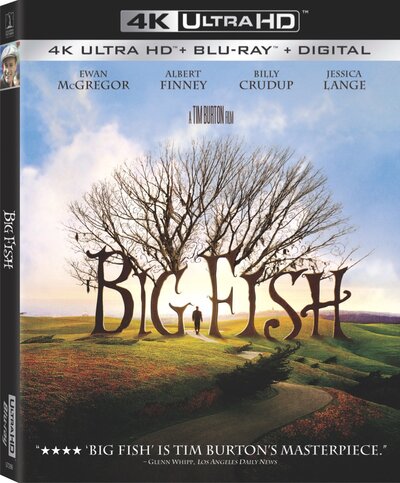 SYNOPSIS
Throughout his life Edward Bloom (Ewan McGregor) has always been a man of big appetites, enormous passions and tall tales. In his later years, portrayed by five-time Best Actor Oscar® nominee Albert Finney (Best Actor in a Supporting Role, Erin Brockovich, 2000), he remains a huge mystery to his son, William (Billy Crudup). Now, to get to know the real man, Will begins piecing together a true picture of his father from flashbacks of his amazing adventures in this marvel of a movie.

It figures I would mess up by not purchasing the iTunes HD digital for $4.99

This is still my favorite film of Tim Burton's career. I think it's just phenomenal.

The original Blu-ray release omitted all of the bonus features except the audio commentary. It's great to hear those will all be back in addition to a new Blu-ray transfer. I look forward to buying this and ditching my old DVD.
Last edited: Feb 22, 2021

I live this movie.
It’s one of my favorites.

Really a beautifully filmed story.
Can’t wait to see it in 4K

Amazon sent me an email today with a delivery range of May 6-11 for this. It's not a big deal and I'll keep the order, but it is a wider range than usual for a title being released on May 4.

I noticed tonight that Amazon's algorithm generated a delivery date of May 6 for new orders, as opposed to a range of May 6-May 11 for the pending order I placed back in February when this was announced. So I cancelled the original order and re-ordered to get the sooner delivery date. This is a total first-world problem, by which I mean it isn't a problem at all if I get the disc a little later than street date. But I also have a couple other longstanding preorders with wide-ranging delivery estimates, which is unusual for Prime. Release date delivery on pre-orders continues to be an advertised feature for Prime and one of the things I like most about my membership. So I notice on the occasion that they deviate from that. Even during the early days of the pandemic, delays receiving my pre-orders were exceedingly rare, so it isa little odd to see several upcoming orders without delivery estimates on the release date.

In any case, I am very much looking forward to getting this next week as I am upgrading from DVD and can't wait to see it in HD. Although I don't have 4K capability right now, this is one of those cases where Sony's extra effort in remastering the Blu-ray and including the previously missing DVD bonus features have earned them an additional sale. I am glad to show my support of this release since they are giving me a beneficial upgrade that I can use. It would have been possible to just reuse the existing Blu-ray, but I'm glad they've put in the extra work and aren't doing that. I love this movie and can't wait to see it look better than my DVD from 16 years ago.

I cancelled and re-ordered again and got a delivery date of May 4 this time, which is the release date. I also got a shipping confirmation when I woke up this morning (which is relatively early for Amazon these days) with a delivery date of Tuesday.

It's weird that their algorithm will give earlier delivery dates to later pre-orders.

But it's done now and I'll have the disc on the release date, which is what I wanted from the beginning.
You must log in or register to reply here.