By the end of the silent era, Harold Lloyd was probably the most consistent box-office draw in movies. And Speedy, his last silent film, turns out to be one of his very best, filled with inventive gags and incredible stunts and offering viewers glimpses of New York City right before the halcyon days leading up to the stock market crash were a thing of the past. Criterion’s new Blu-ray release of Speedy looks and sounds quite wonderful and makes a smashing new addition to their growing Harold Lloyd collection. 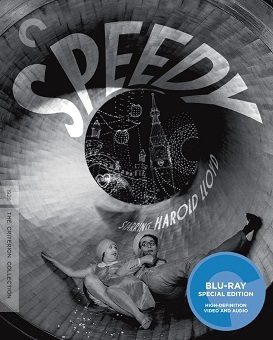 Unable to hold down a steady job but wanting to marry longtime girl friend Jane Dillon (Ann Christy), Harold “Speedy” Swift (Harold Lloyd) is disappointed that Jane won’t marry him until they can find some solution to the problem that her grandfather Pop Dillon (Bert Woodruff) is having. It seems he owns the last remaining horse drawn tram in New York, and a powerful railroad company run by W.S. Wilton (Byron Douglas) can’t run their new electric line on the track until they can buy out Pop’s antiquated contraption. But, they don’t want to pay Pop’s asking price, so they arrange to hire a gang of thugs to put the car out of commission for a day, legally making it obsolete so they can take over the line without paying a penny. Once Harold gets wind of their scheme, he knows he has to do something to combat the gang even if it puts his life on the line.

Though that plot description sounds very melodramatic as penned by John Grey, Lex Neal, Howard Rogers, and Jay Howe, a vast majority of the movie is made of up charming, whimsically funny set pieces with the hapless Speedy at the mercy of the world. There’s a delightful opening scene with Harold in the latest of his dead end jobs soda jerking while showing off his nimble ways with ice cream and doughnuts. Further troubles at his next job as a cab driver lead to a series of inspired gags with his cab that just build and build to monumental laugh-out-loud proportions. (It’s in this sequence that the greatest sports star of the day – Babe Ruth – does a memorable cameo bit as a passenger at the mercy of Speedy’s leaden foot on the accelerator and goggle-eyed adoration of his all-time baseball idol. One can only imagine how cinemagoers of the era must have reacted to seeing their favorite movie star sharing the screen with their favorite sports star.) As hilarious as the cab sequence is, however, it’s superseded by the Coney Island sequence which precedes it where Walter Lundin’s exquisite black and white photography captures the immensity and the novelty of the place in a cinematic memory book which is irreplaceable. And then add to that the succession of Lloyd gags where the luckless Speedy despite enjoying a succession of unique rides and stomach-bursting boardwalk confections must contend with a feisty dog, a cagey crab, and some wet paint, and it’s a visit that you don’t want to see end. How clever to conclude this section with one of the film’s most treasurable scenes with Harold and Jane setting up house in the back of a truck taking them back to the city.

Yes, as is the case with so many silent comedies of the era, there’s a madcap chase at the finish which also uses some rather primitive for the era use of rear projection that doesn’t match all that well with the real footage filmed in streets both in New York and Los Angeles with Lloyd’s stunt double and featuring a spectacular crash which was likely not a part of the scripted events but was worked into the final scenario rather cleverly. Preceding that, there is an elaborate all-stops out mob scene filled with slapstick fighting and featuring Speedy’s old-timers against the gangland mob sent to destroy the horse drawn car that is impressively shot with once again some impressive gag ideas which keep an otherwise very serious melee from weighing down the movie too thoroughly. It's little wonder that director Ted Wilde earned an Oscar nomination during the first year of the Academy Awards for his work on Speedy. From the spectacular sights of old New York and its environs to the craftily shot fight and chase scenes, this is one impressively shot movie.

As always, Harold Lloyd makes an appealing everyman though his lack of concern over his inability to sustain a job for any length of time (“I’ll get another one tomorrow”) seems very cavalier in these times when decent paying jobs aren’t so plentiful (and would be soon in his own era once the Depression hit). Ann Christy makes a fetching sweetheart for the luckless Lloyd, but unlike other leading ladies in his films, isn’t given much to do except tag along with him and watch impotently while the world comes crashing down around him. Bert Woodruff is fine as the feisty grandfather, and Byron Douglas and Brooks Benedict sneer menacingly as the antagonists. Babe Ruth does himself proud in his sequence as the celebrity at the mercy of his number one fan’s reckless driving.

The film is framed at 1.33:1 and is presented in 1080p resolution using the AVC codec. Sharpness is generally excellent (new film stocks enabled actors to wear less pronounced makeup which makes close-ups far more appealing) apart from occasional softly focused shots and some vault footage at Yankee Stadium as the Bambino swats one of his legendary home runs. The grayscale has very good black levels usually though sometimes things are a bit less inky than others. Whites are nice and crisp, and the little bit of tinting used in a couple of scenes works well. Contrast has been consistently rendered in making the picture an inviting one. There is a little evidence early on where digital clean-up and repair was necessary with some telltale remnants of irregularity in background textures, but these moments are fleeting and do not cause any major distractions. The film has been divided into 13 chapters.

Audio Commentary: a lively and informative give-and-take dialogue between Bruce Goldstein, director of repertory programming at New York’s Film Forum, and Turner Classic Movies program director Scott McGee is a must listen for fans of the Harold Lloyd and the film.

In the Footsteps of Speedy (31:05, HD): a 2015 documentary produced by Bruce Goldstein noting the various locations in New York and Los Angeles where and how Lloyd and his cast and crew shot the movie. Tremendously well researched and presented, this is an outstanding documentary.

Babe Ruth (40:24, HD): Film historian and archivist David Filipi offers this fascinating montage of vintage silent and sound clips of Babe Ruth both on and off the field.

Deleted Scenes (4:24, HD): with no actual outtake footage, Bruce Goldstein muses about possible sequences cut from the film from existing stills which do survive.

Home Movies (17:45, HD): narrated by Harold Lloyd’s granddaughter Suzanne Lloyd, these remarkable home movies show Lloyd and his family off the movie set but at one of their various homes in Los Angeles or in Santa Monica.

Bumping into Broadway (25:51, HD): a 1919 two-reeler with Harold Lloyd and Bebe Daniels as aspiring show biz kids trying to make inroads in the business, she as an actress and he as a writer.

Enclosed Pamphlet: contains a cast and crew list, information about the transfer, some black and white stills, and critic Phillip Lopate’s incisive essay on the movie.

A wonderful silent comedy which shows the essence of Harold Lloyd’s appeal as an actor and comedian, Speedy comes to Blu-ray in a beautiful high definition transfer with a raft of special features that are treasurable additions to an already superb comedy. Highly recommended!

Great review. Speedy is one of my favorite Lloyd films, so I'll almost certainly be getting this Blu-ray. I don't find it particularly funny, but I love the 1920's New York atmosphere, and Babe Ruth's cameo is great.

I just picked this up as a blind buy at Barnes & Noble's Blu-ray sale.


Very looking forward to it for all the reasons mentioned...but, most specifically, for the footage of NYC back in the late '20s (including the Babe).


Thanks for the review, Matt!