Selling the UK version of this classic Carpenter film.
It comes with a slipcover but it's a bit ripped off on the upper back, as it is shown in the photo.
More details about number of discs, audio, subtitles etc. here: 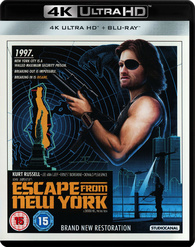 www.blu-ray.com
The condition of the discs is like new. The UHD has been played once.