Bong Joon-ho’s Snowpiercer for once offers a dystopian-themed story that is not just about gloom and doom but rather about hope and the renewal of the human spirit. In a series of thrilling adventures set on-board a bullet train in the near future, surprises abound, characters rise to the challenges they face, and themes of class struggle and survival keep things not only interesting but also distinctly profound. The director’s individual touch on the story and its unveiling is unmistakably his own, and it draws the viewer in so that two hours passes like ten minutes. 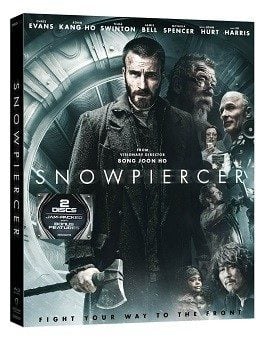 In order to quell global warming, CW-7 missiles are launched which have a devastating result on the environment returning the globe to a new Ice Age. Only those individuals lucky enough to board a supertrain managed and maintained by the enigmatic billionaire Wilford (Ed Harris) and which travels relentlessly across the globe can even hope to survive. Now almost two decades into this endless ride, the train’s inhabitants (divided by their social classes and equivalent accommodations) in the rear (cattle) car have had enough of the inhumane treatment: quick, unexplained deaths, torture for the uncooperative, and a gel-like protein bar which is their only sustenance. Goaded by the acknowledged leader of the “freeloaders” (as they’re described by the braying, devilish commandant Mason – Tilda Swinton) Gilliam (John Hurt), seventeen-year veteran of the back car Curtis (Chris Evans), his protégé Edgar (Jamie Bell), determined mother Tanya (Octavia Spencer), and others storm through the gates of the cars which precede theirs in order to get to the engine car where Wilford lives and assert their right to better treatment. What they find will change their lives forever.Based on a 1983 French graphic novel by Jacques Lob, Benjamin Legrand, and Jean-Marc Rochette, the screenplay by Kelly Masterson and director Bong Joon-ho combines thoughtful reflections on class struggle, allegiances, and the untenable behavior of the entitled during times of struggle with jolting, expressive action sequences always touched by an artistic hand that is interested more than merely portraying a bloodbath. (True, the violence does increase and become more graphic the more deeply into the film we get, but the bloodletting seems purposeful in explaining the loss which must come with any resolution even those based on the right causes.) Director Bong Joon-ho mounts several astounding action scenes: the first fight between the rabble and the train’s guards armed with axes is staged as the train goes through a lengthy tunnel and thus shown on-screen through the night vision goggles of one of the soldiers and much of it in slow motion. A later fight with machine guns is electrifying in its swiftness and unexpected viciousness. But it’s not all fights: a sojourn into an idyllic (if scarily indoctrinating) classroom compartment gives us some backstory on the history of the cataclysm and subsequent saving by Wilford and his train, and each opened door leads into unexpected worlds sometimes eerily beautiful (an aquarium with its accompanying sushi bar, a sauna for the elite, a rave club) and sometimes cruelly violent. And though we’re aware that many of the snowy landscapes glimpsed outside the train’s windows are CGI-generated cities and plains and mountains, they’re nevertheless gasp-inducing images filled with a terrifying kind of deathly silent beauty. If the film has any weakness, it’s in creating a staple character or two that exist only in the minds of action movie writers: the almost invincible soldier (Vlad Ivanov) who can take beatings, stabbings, and gunshots and not be stopped, only slowed and the maniacal mastermind behind everything who never in his wildest dreams considers any other scenario than his own.Chris Evans delicately traverses the heroic and the humble in his performance as Curtis, doing a masterful job as the gallant captain of the team but never wishing to own the title. He has a climactic monologue late in the film in which he explains his last memories of normal life combined with the hellish beginning of his time on the train that is his most outstanding moment in the movie and will surely be one of his career highlights. Tilda Swinton certainly stands out from the crowd in her showy role as the bigoted, cruel Mason, a part originally written for a male performer but transformed for her own special gifts. Ed Harris is solid and undemonstrative as Wilford, and Kang-ho Song as the criminal Namgoong Minsoo who’s instrumental in getting them from one car to another makes a great impression acting in his own Korean language. Jamie Bell, John Hurt, Octavia Spencer, and Ewen Bremner all make major impressions as other members of the underdog rebellion.

The film is framed for video at 1.78:1 and is presented in 1080p resolution using the AVC codec. Dealing with wide variances of light and dark, it’s amazing how detailed and nuanced the photography is and how well it translates to Blu-ray. Clarity is exceptional, and color and contrast are handled beautifully throughout with realistic skin tones. Black levels are superb with shadow detail sublime and without flaw. The film has been divided into 20 chapters.

The DTS-HD Master Audio 5.1 sound mix is exceptionally well done on just a medium budget for the film ($40 million). Dialogue has been masterfully recorded and is placed mostly in the center channel with occasionally effective uses of directionalized voices. Marco Beltrami’s gripping, expansive score has been firmly threaded through the entire soundstage, and split effects are a given in the several fight scenes that occur in the film. Oddly, the surrounds do go silent occasionally, something odd when they're traversing the rocky, ice-infused rails of some mountain ranges. The LFE channel gets a brisk workout not only in some explosive moments but also in a steady rumbling that occurs occasionally as the protagonists wind their way through some of the more unusual compartments.

Audio Commentary: critic Scott Weinberg hosts a commentary track which he shares with five film critic friends whom he reaches by telephone. Some of the phone comments are sometimes difficult to hear clearly, but the critics do engage in some interesting discussion not just about this film but about apocalyptic films in general.Le Transperceneige (54:27, HD): a French language documentary which details the experiences of two of the three men responsible for the original graphic novel Jean-Marc Rochette and Benjamin Legrand (the third creator, the late writer Jacques Lob is represented in vintage interview footage and in an interview with his widow) on their journey from the two years working on the graphic novel through their subsequent careers working in obscurity until the comic was chosen by director Bong Joon-ho for production. The two tour the sets in Prague (and film a scene as extras) and talk with the film’s director and production designer Ondrej Nekvasil. They later attend premieres at film festivals and enjoy a triumphant premiere in Paris.The Birth of Snowpiercer (15:09, HD): director Bong Joon-ho tells the story of the film and then other crew members including designer Ondrej Nekvasil, art director Stefan Kovacik, costume designer Catherine George, and actors Chris Evans, John Hurt, Tilda Swinton, and Ed Harris add their own comments about their work on the production.The Characters (13:08, HD): director Bong Joon-ho introduces each of the main characters and describes his thoughts about casting the actors he did.Animated Prologue (4:31, HD): a CGI-produced prologue which was the original beginning of the film is presented. The information revealed in it gets covered in the film proper making its use unnecessary.Chris Evans/Tilda Swinton Interviews (4:40, HD): the two actors are interviewed separately about their characters, what it was like to work together, and their impressions of working with director Bong Joon-ho.The Train Brought To Life (8:06, HD): video shot of an outdoor screening of the film in Texas followed by a question and answer session with director Bong Joon-ho.Galleries (HD): two art galleries may be stepped through: fifteen portraits of various incarnations of the train and twenty-four impressionistic paintings of important scenes and characters by original graphic artist Jean-Marc Rochette.

An offbeat but quite commendable sci-fi apocalyptic adventure tale, Snowpiercer is a movie well worth experiencing. Made on a budget about one-third that of a Hollywood sci-fi tale, the film features bold action, poignant revelations, and a pertinent message about humanity and its feverish desire to survive even in spite of itself. Highly recommended!

No. Sorry. The film and commentary are on one Blu-ray and the remaining bonus features are on a second one.
D

They were trying to make a train that would go 200 mph, but in the end, it could barely do 100. The budget now explains the less than top notch visual effects. Swinton was good, but I'm starting to get tired of these futuristic caricatures. I also thought it was too long, especially that drawn out ending that went on about 15 minutes more than it should have. I'd give it a 3.

Matt Hough said:
No. Sorry. The film and commentary are on one Blu-ray and the remaining bonus features are on a second one.
Click to expand...

Hah, interesting! This was the first and only film I bought digital-only and watched on my Apple TV, it was fantastic via that method and I bet the Blu is even better. Shame they don't give you a digital copy cause it's a stunner!

What do folks think of the TV series....?

KeithDA said:
What do folks think of the TV series....?
Click to expand...

There's a discussion in the TV forum:

https://www.hometheaterforum.com/community/threads/snowpiercer.366410/#post-4857478
You must log in or register to reply here.