A movie road trip, Western style distinguishes John Maclean’s Slow West, winner of the Grand Jury Prize at the Sundance Film Festival in 2013 and one of the freshest and most involving westerns seen in many a year. It’s a gorgeous looking film (shot in New Zealand masquerading as the American West) and features two protagonists whom the audience will have no trouble getting to know and like. What’s more, at less than ninety-minutes, it’s a compact film with not one moment of wasted dialogue, action, or character development. 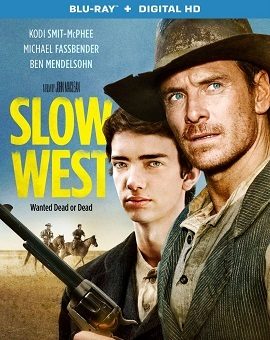 In 1870, Scottish immigrant Jay Cavendish (Kodi Smit-McPhee) is heading across the American West to find the love of his life, Scottish lass Rose Ross (Caren Pistorius) who had fled Scotland with her father (Rory McCann) and gone to America. Jay is young and very naïve to the dangers of the West, and he comes across a stranger named Silas Selleck (Michael Fassbender) who offers to protect him from the prairie’s hostile elements for a price, money Jay is happy to pay if it will get him to Rose faster. Along the way, however, Silas must use brute force on a number of occasions to save their necks from marauders of various kinds, and occasionally Jay loses heart about Silas’ abilities, but he always comes through when the chips are down and actually turns out to be a decent travelling companion while they make their way across Colorado.

Director John Maclean has written a nifty screenplay, filling his picaresque with a number of notable incidents featuring fresh takes on what one might expect in a Western saga with its Indians both hunters and hunted, con men at every turn, a trading post that’s more dangerous than its outside appearance might lead one to expect, bounty hunters on the prowl, and the like. Some of the adventures are funny; others are terrifying, and Maclean doesn’t flinch from showing the violence of the place and time when it’s necessary (though he doesn’t dwell on cruelty or viciousness). Throughout, we get little flashback gems showing us why Jay is so drawn to Rose (though we never quite see the connection that he’s feeling: that may be the fault of the actress or the writing/directing) though the director spends much of his camera time focusing on the interesting faces of his cast and showing us some breathtaking vistas the duo passes through on their trek to Rose and her father. When we finally get to the final destination, what we see is almost painterly in its acres of waving wheat surrounding a picture-perfect wooden house built from new wood. The beauty ends there, of course, as the movie reaches its violent and emotionally-numbing conclusion, but the director had been carefully building up to it in a series of masterful scenes narrowing the tone to one of extreme danger. If the ending is way too pat, it’s really the only misstep in an otherwise terrific Western adventure film that combines some heartrending characters amid some of the most picturesque settings imaginable.

Kodi Smit-McPhee as the fresh-faced, total innocent Jay and Michael Fassbender as the worldly but worthy Silas make a wonderful duo, a team one would be willing to travel with anywhere. They have an easy and affecting camaraderie that makes events as they occur tremendously engaging (a method to dry clothes is especially memorable) and ultimately quite moving. Ben Mendelsohn as Payne, a former friend and now rival, offers a quietly unsettling presence. Andrew Robertt makes a striking impression in his one scene as Werner, a kindly fellow traveler, and Caren Pistorius as the object of Jay’s affections is pert and ready for anything.

Though framed for video in its original 1.66:1 aspect ratio (an unusual one for a modern film but one which allows a nice combination of the old traditional westerns with more widescreen ones from the next era) and presented in 1080p using the AVC codec, sharpness is outstanding with plenty of detail to be seen in clothes and facial features. Color is rich and robust, especially in the western scenes where blues and greens seem especially vibrant and contrast is increased a bit to suggest the ever-present sun beating down on the characters. Skin tones are believably hued. Black levels are very good but possibly not at optimal levels. The movie has been divided into 16 chapters.

The DTS-HD Master Audio 5.1 sound mix offers robust fidelity and makes for an immersive listening experience. Though there is some directionalized dialogue, most of the well-recorded speech has been placed in the center channel. Sound effects are beautifully situated around the soundstage (a crackling thunderstorm will lift you out of your seat), and Jed Kurzel’s music score gets the full surround treatment.

Deleted Scenes (HD): two deleted scenes are available but must be viewed individually. They run 4:35 and 4:09. respectively.

Promo Trailers (HD): Ex Machina, Cut Back, Beyond the Reach, among others.

A brief but memorable western which is well worth the journey, there is nothing slow about Slow West which features a wonderful array of satisfying characters in a comedy-drama that has lots of surprises and a story that will stay with you after the narrative has concluded. Recommended!

I'm up for a new Western in an obsolete aspect ratio!

I tried to catch this in it's short theatrical run but couldn't find the time away. Never realized it was in 1.66:1 aspect, very interesting. I'm sure thats how it was displayed at the theaters too, right?

That's the way it was displayed at Sundance.

This is my favorite movie of this summer so far and I doubt anything will top it. It had a theatrical release only a month ago (just a six day run) here and now to kick off July is already arriving on blu-ray. So be it. I have it on order. I really enjoyed this one and look forward to revisiting it at home.

This is a MUST SEE!


Many in the cast looked familiar to me. I had to look them up in IMDB, and sure enough, I had seen the 2 lead actors in several other films. I have a good memory for faces, but a lousy memory for names.

Just watched the blu-ray and it was outstanding seeing this again in my home theater. There seem to be several little tips of the hat to other westerns and the rather brief running time leaves you wishing there was more. There are two "deleted scenes" included but one appears to be just a cast member singing on the set...not actually a scene. Not sure where the other deleted scene actually would have fit in the film...it may be an alternative way they thought about having the two main characters meet that was discarded.


Highly recommend this one to Western fans with a love of some Coen brothers style quirk and wit.

Thanks for the review, Matt. I had the chance to watch this tonight and loved it. Your review was spot on. One of the best films that I've seen this year. Just wonderful!
You must log in or register to reply here.