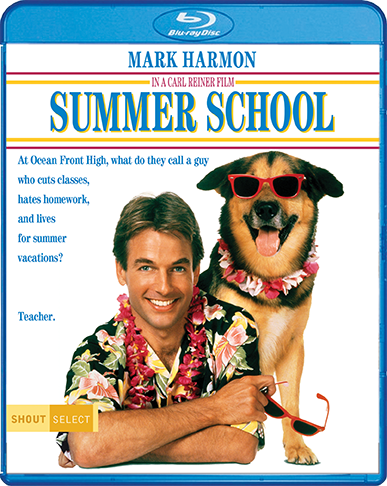 "ENDEARING, CONVULSIVELY FUNNY ... SUMMER SCHOOL IS A RARE DELIGHT." – Bob Thomas, Associated Press
School's out, and Ocean Front High gym teacher Freddy Shoop (Mark Harmon) has big plans: summer in Hawai'i. But the school's vice principal has plans for Freddy too: teaching remedial English. Aloha, paradise — hello, Summer School. Director Carl Reiner (The Jerk) delighted fans and critics alike with this warm, perceptive comedy about a laid-back teacher relegated to teaching a class of likeable misfits, including a slasher-flick addict (Dean Cameron), his wacky sidekick (Gary Riley), and a sexy female surfer (Courtney Thorne-Smith). Kirstie Alley is the no-nonsense history professor down the hall who's keeping an eye on all the shenanigans — and on the handsome, irresistible Freddy. The road to academic success has never been bumpier, but to earn straight A's in laughter ... take Summer School.

This is such a fun film.

My daughter was really into NCIS, primarily because of Harmon's character Gibbs. I introduced her to this film as the true origin of Gibbs before he went into the military.

Since Paramount has been turning out a decent number of catalog titles on Blu-ray, I was actually thinking that Paramount would release this. Either way, I'm just happy to finally see it come out.

Fun film. I think Kirstie Alley did this film right before she was cast in Cheers, and the pregnant student (Shawnee Smith) would later star in Becker.