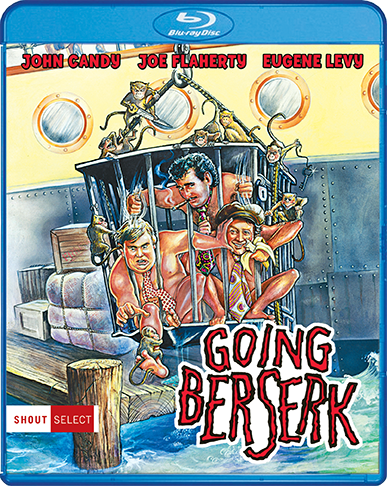 "GOOD CAST ... DIRECTED BY THE COMEDIAN DAVID STEINBERG, WHO BRINGS A THROWAWAY STYLE TO MANY OF THE FILM'S GAGS" – JANET MASLIN, THE NEW YORK TIMES

SCTV stars John Candy (Stripes), Joe Flaherty (Freaks And Geeks), and Eugene Levy (Schitt's Creek) team up on the big screen for the free-wheeling comedy Going Berserk! Part-time chauffeur John Bourgignon (Candy) has decided to settle down with Nancy, the love of his life and daughter to a powerful congressman. But when news of his impending nuptials leaks, John gets entangled in a plot more twisted than the knot he was preparing to tie with Nancy! Kidnapped by a cult and brainwashed to assassinate his future father-in-law, our hero soon finds himself on an odyssey of sheer lunacy.