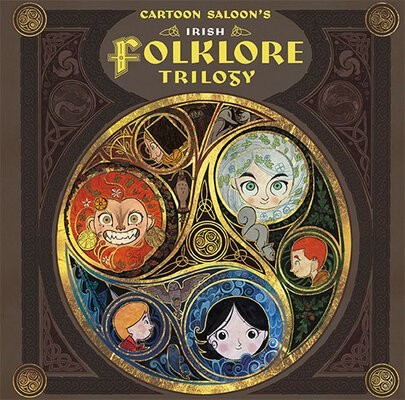 "A Perfect Trilogy is Complete" – Carlos Aguilar, The Playlist
Magic, fantasy and Celtic mythology come to life in Cartoon Saloon's celebrated Irish Folklore Trilogy, featuring three Academy Award®-nominated* modern animated classics. The studio's first film, The Secret of Kells, which beautifully tells the tale of a master illuminator and his young apprentice, is followed by the breathtakingly gorgeous Song of the Sea, which recounts the adventure of a mythical seal-child and her brother on a quest, and the triumphant Wolfwalkers, which delves into the friendship between a young huntress and a free-spirited wolf-girl. This limited edition set features the exclusive Blu-ray™ presentation of Wolfwalkers and hours of new bonus features exploring the three films in environmentally friendly packaging that reflects each film's loving depiction of the natural world.
*2009: Best Animated Feature Film, The Secret of Kells ; 2014: Best Animated Feature Film, Song of the Sea ; 2020: Best Animated Feature Film, Wolfwalkers

THE SECRET OF KELLS
SONG OF THE SEA
WOLFWALKERS