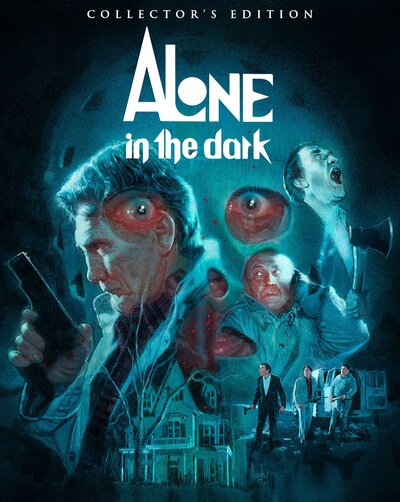 Finally! The criminally underrated 1982 slasher film ALONE IN THE DARK hits the Blu-ray format for the first time this Fall! Stars Donald Pleasence, Jack Palance, Martin Landau and Dwight Shultz. Directed by Jack Sholder (The Hidden).
Here are the early details we have at current time to share:
• National street date for North America (Region A) is Sept 14th
• This will be presented in our "Collector’s Edition" series and will come guaranteed with a slipcover in its first three months of release.
• The newly commissioned artwork pictured comes to us from artist Hugh Fleming. This art will be front-facing, and the reverse side of the wrap will feature the original theatrical artwork.
• Extras will be announced on a later date but we can confirm today that there will be a new HD transfer of the film!