Claude Lanzmann’s Shoah is an honest, unblinking account of the Holocaust told by those who were there: death camp survivors, SS guards and German police, and onlookers who knew what was happening but were either powerless to stop it or eagerly reveling in its carnage. The director himself doesn’t call his masterwork a documentary; rather, he considers it a living history, filmed at a time when those involved in one of the world’s most heinous undertakings were alive and (sometimes) willing to talk about it. This nine-and-one half hour film takes both patience and endurance. There are facets of the filming that may irritate with slow pacing or the methodology being used to elicit the responses from the witnesses, but in the end, the trip is more than worth it: a patchwork investigation into the demonic planning and execution of one of the world’s most dastardly plots presented with power and precision. 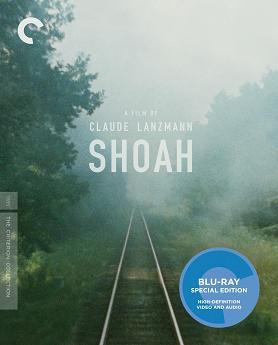 Divided into two major sections (with those sections also halved on the two Blu-ray discs that house the film), Shoah doesn’t attempt to be all-inclusive. The death camps that director Claude Lanzmann concentrates on are Chelmo, Sobibór, Treblinka, and Auschwitz-Birkenau. We visit all four sites (often simulating the horrific train trips which the millions of Jews underwent on their way to extermination including the slow arrivals at the train stations or the end of the line at the gaping maw of Birkenau’s main entrance), and walk on the land once trod by countless people who had no idea they were living their last hours on Earth. Witnesses attest to the locations of the gas chambers and the ovens in places where they were destroyed before the end of the war or we see the remains of the crematoriums at Birkenau. We walk down a path that the Nazis had misleadingly marked with Red Cross signs only to be told at the end of it was not an infirmary but a ditch where bodies would fall after being shot in the head. Throughout there is no archival footage shown. All that we see in Shoah was shot over a twelve year period during the film’s production and editing.Of course, of major interest are the people we meet with their stories: sometimes touching, sometimes incredibly heartbreaking, sometimes either bogus or those which seem to be skirting the absolute truth. All of these witnesses speak in a language comfortable to them. The Slavs are translated into French for the director’s understanding and then his questions are translated into whichever Slavic tongue the speaker understands. These back and forth translations do seem slightly tedious, perhaps because we’re so hungry to get the information being imparted that we don’t want to wait for a translation, but thankfully, many of the witnesses speak either French, German, or English which is subtitled but not needed to be translated for the director who asks the questions of all of the witnesses.You won’t soon forget Simon Srebnik, one of only two survivors of Chelmo, who was kept around by the Germans as a young boy because he could sing and who recreates his singing as a boat drifts down the river or the other Chelmo survivor Michael Podchlebnik who perpetually smiles so as not to relive the nightmarish days and nights in the camp. There are frequent appearances by Richard Glazar who has personal stories of atrocities at Treblinka and Abraham Bomba who stayed alive since his skills as a barber were precious to the Nazis as he clipped hair from those condemned to die moments before they were gassed, hair that would later be sold for wigs. Rudolph Vrba and Jan Piwonski were both Jews who were saved from death by having to herd their unsuspecting comrades off the trains and onto ramps which would take them to the death chambers or gas vans. And then there are former SS officers who matter-of-factly state what their jobs were and take some pride in that they accomplished their aims with efficiency: Franz Suchomel and Franz Schalling. Of course, these latter witnesses were filmed without their knowledge using a hidden suitcase camera which gives us a glimpse into some real faces of evil. And then there is Joseph Oberhauser, an SS officer at Belzec, who refuses to converse with Lanzmann who has tracked him down working in a café kitchen.There are surprises, too, to be found here including late in the film the fascinating stories of planned insurrections by the Jews who figured they had nothing to lose, both in the Warsaw ghettos and at Auschwitz and Sobibór. Rudolf Vrba and Simha Rottem both have surprising stories to tell. We learn that the Nazis did not own the railroads that conveyed their subjects to their deaths, so they had to pay fees for transportation to carry out their "final solution," and stealing the valuables the victims often brought with them was one way they raised money for their operations. Contrary to stories of town bystanders who for decades claimed they had no idea what was going on in those camps, Lanzmann’s interviews refute those claims utterly as several of the witnesses state they stood near the trains as they arrived and made slashing motions across their throats trying to prepare the inhabitants for what was awaiting them.

Shot in 16mm, the transfer framed at 1.37:1 and presented in 1080p using the AVC codec was never going to look super sharp, but there is a pleasing clarity present that is consistent throughout the movie’s lengthy running time. Flesh tones appear natural, and the colors are more than adequately represented. Certainly, any age-related artifacts have been completely eliminated, so this is likely the best the film has ever looked. The white subtitles are easy to read. The film’s four sections have been divided into 57, 29, 16, and 21 chapters respectively.

The PCM 1.0 (2.3 Mbps) sound mix is a good, strong mono presentation that puts the dialogue front and center and never allows sound effects like the chugging trains or street sounds interfere with what’s being said. No age-related artifacts like hiss, crackle, pops, or flutter mar the audio experience in any way.

Theatrical Trailer (4:22, HD)A Visitor from the Living (1:08:03, HD): director Lanzmann’s 1999 presentation of a 1979 interview with Maurice Rossel, a Red Cross representative who visited both Auschwitz and the Theresienstadt ghetto and had the wool pulled over his eyes in both locations by the Nazis.Sobibór: October 16, 1943, 4 p.m. (1:42:12, HD): director Lanzmann’s 2001 presentation of a fascinating interview cut from Shoah featuring Yehuda Lerner who was part of a successful uprising against the Nazis which inevitably led to the closing of that camp.The Karski Report (48:42, HD): director Lanzmann’s 2010 presentation of a second day of filming with witness/Georgetown professor Jan Karski whose eye-witness accounts of what he saw in the Warsaw ghetto brought him into a private audience with both President Roosevelt and a Supreme Court justice who didn’t believe what Karski had to say.Two Claude Lanzmann Interviews (1:00:47, 13:58, HD): the first is a 2013 interview in which the director recounts the lengthy decade-plus long journey to bring Shoah to the screen. The second is a 2003 interview in which the director specifically comments on how his follow-up films A Visitor from the Living and Sobibór came into being.Interview with Caroline Champetier and Arnaud Despichin (33:08, HD): a 2013 interview with Shoah’s assistant camerawoman and filmmaker Despichin on director Lanzmann’s techniques while filming and his determination to get these testimonies no matter how long it took.60-Page Booklet: contains a cast picture gallery and crew list, a capsule summary of each chapter on each disc, two essays by director Claude Lanzmann on his aims for the project, and film author Kent Jones’ detailed analysis of the work.Timeline: can be pulled up from the menu or by pushing the red button on the remote. It shows you your progress on the disc and the title of the chapter you’re now in. Additionally, two other buttons on the remote can place or remove bookmarks if you decide to stop viewing before reaching the end of the film or want to mark specific places for later reference.

A one-of-a-kind chronicle of one of the darkest periods of world history, Shoah is an indescribable viewing experience. At turns harrowing and riveting, the film despite its great length pulls one along on its horrifying and yet edifying journey. The Criterion bonus package on disc three features superb follow-up films by the director which extend his original film’s aims and fascinating interviews with him and others that are not to be missed. Highly recommended!

This to me is one of the most important films of my life time. It is incredibly well realized and it is one of the few films that captures history in such a way that I would encourage every single student, high school or college, to sit and listen to the testimonies in Shoah to get a profound understanding of the human realities of WWII.
This is a must-own - and we should remind all, purchase of this documentary in part helps fund the Shoah foundation.

There is another event this weekend at many Cinemark theaters, where "Schindler's List" will be presented on the big screen this Sunday, also contributing to the Shoah foundation, and there will be excepts from this fantastic film in the pre-show. Groups that work to keep history alive deserve our support not just because of the fantastic filmmaking, but because of what the film means to the world.

A great film with a great big flaw.But, it still is a must watch for anyone considering history or political science degree.

This will be on my list for the next B&N sale.

I never did see this, it sounds disrespectful to say "I can 't wait to check it out" or something like that, but it's true. This sounds both soul crushing and amazing. Great review.

schan1269 said:
A great film with a great big flaw.But, it still is a must watch for anyone considering history or political science degree.
Click to expand...

If its political you can ignore, but your statement makes me wonder hat perceived flaw.. Length is the one that comes to mind.

Not exactly political, per se...(historically blind? Or historically glossed over?)Just don't bring this film up to Polish people. It has been presumed that this film should have included a French perspective. It is wrongly assumed no Polish people did anything, when...depending who you speak to, the Poles saved more Jews(and died trying) than any other people/country did.Nowhere is this brought up in the film. It is alluded to Poles were "hear nothing, see nothing".Point being...even with that flaw, great film.

As someone who has a Polish relative who had escaped from a camp, it's interesting that that side did get glossed over like that. I'm guessing it's more due to personal stories being told in the film, as opposed to a political agenda by the film maker. Something more to think about once I actually watch it.

It's also said that the subtitles and methods of translation led to manipulation. And no mention made of The Vichy French governments complicities...
You must log in or register to reply here.