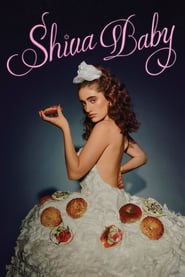 Plot: College student Danielle must cover her tracks when she unexpectedly runs into her sugar daddy at a shiva - with her parents, ex-girlfriend and family friends also in attendance.
Emma Seligman's SHIVA BABY is a pretty good example of the uncomfortable school of comedy. The character's awkwardness invites the viewer to share as they squirm. Essentially, it's a one act play about a neurotic college age young woman, Danielle (Rachel Sennott), who feels obligated to attend a post-funeral reception (a Shiva in the Jewish religion) for a person she barely, if ever, knew. Her parents, Joel (Fred Melumed) and Debbie (Polly Draper), have guilted her into going.

After a brief prologue, the rest of the movie is at the Shiva. There, Danielle's faults are front and center and exposed for everyone to see. She is, in short, a mess. Her education isn't on track, and with no real job prospects on the horizon. Her parents pay her bills. She is voraciously sexual, but unfocused even there. As you might expect, that particular dysfunction also gets flagged at the increasingly embarrassing get-together.

Seligman has expanded a short subject (also starring Sennott) of the same title, but, it's still only 77 minutes long. What counts here are the performances and the attention to details. The large supporting cast includes Danny Deferrari, Molly Gordon and Dianna Agron and it's an accomplished ensemble. Seligman's script is full of knowing insights into the community it depicts. She never dumbs it down for the masses - you get on board with the Jewish characters on their own terms. Still, by paring it down to a single long sequence, SHIVA BABY's effectiveness is rather narrow. It's fine on it's own level of ambition, but, it can't help but feel like an extended short.

I viewed this the other day and my short summary of the film is 'train wreck'. Not the film which was pretty funny, but the situations in which Danielle finds herself. Very much an awkward comedy that I had to take a break from and finish the next day, which I guess speaks to its effectiveness in making the viewer share Danielle's uncomfortableness. I have to admit I was briefly confused about who was who following the opening sequence (mostly due to changes in hair style.) Once I got that squared away then it all made more sense.

I enjoyed the film, but I agree that it does feel like an extended short due to the narrowness and focus of the plot. If you like awkward comedies then this will fill the bill.

- Walter.
Movie information in first post provided by The Movie Database
You must log in or register to reply here.