Self/Less imprints its personality onto Blu-ray in an edition that offers the low-budget science fiction thriller the best presentation it can. Ryan Reynolds stars in a story about one mind inhabiting another body – a concept that’s intriguing by itself but here is sadly found in a pretty forgettable movie. The Blu-ray offers good high definition picture and sound and a few bonus features, but there’s just no getting around the basic problems with the movie itself. 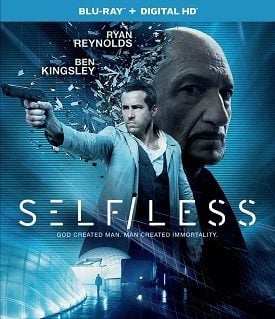 Self/Less does have a fairly interesting premise. The story follows what happens when a wealthy but dying businessman Damian Hale (Ben Kingsley) moves his consciousness into a new, younger body (Ryan Reynolds) and tries to start a new life. To do this, he must completely leave his old life behind and move to a new city – in this case, New Orleans (the primary shooting location for the movie). The scientist who makes this possible, Albright (Matthew Goode) cautions him to be discreet and to take the recommended anti-rejection medications and he’ll be home free. Of course, things aren’t exactly what they seem. Which leads to multiple action set pieces for Ryan Reynolds to fight or chase his way through. In the right hands, this could make for a truly mind-bending thriller, no pun intended. Unfortunately, the current movie never really gets any farther than the surface in its examination of the basic concepts. The initial setup is all we really get before the action beats start, and the movie turns into one extended chase sequence. It’s a shame, because there’s a good cast here, and what could have been something far more memorable.

SPOILERS HERE: The core idea here is actually a discussion of the price of immortality. Damian is told that the body he is taking is just something that’s been grown for him with no personality of its own. Except that once his consciousness moves into the new body, he keeps having hallucinations of people and places he’s never seen before. It’s not long before the truth comes out. He’s not hallucinating. He’s actually experiencing the real memories of the man whose body he has appropriated. He wasn’t given an empty husk but rather the living body of a former Marine who still has a family of his own at home. The “anti-rejection” meds are actually suppressing the Marine’s real personality and memories. So Damian has an even nastier decision to make now. If he doesn’t continue to take the meds, the Marine will reassert himself and Damian’s consciousness will fade away. If he does continue to take the meds, the Marine’s consciousness will disappear. Both men cannot exist in the same body at the same time. Again, it’s an interesting concept and one that deserves a better vehicle than the one it has here.

MORE SPOILERS: Where this goes off the tracks is that the movie abandons its own story logic once it establishes its basic rules. As soon as Damian realizes who and what he is inhabiting, the movie devolves into a series of shootouts and chases, as Albright’s men try to kill him before he can presumably let anyone else know what they’ve been up to. (There’s apparently a whole network of people who have been essentially buying black market bodies without knowing what they were getting…) And that’s really all there is to the story. Ryan Reynolds gets cornered by the bad guys and then he shoots or outraces them to escape. And then he does it again. And again. Frankly, it’s a waste of a good concept. The movie even goes so far as to forget its own rules as it goes. The initial transfer for Damian results in him clearly spending weeks or months learning how to use his new body and training himself back into basic working condition. But as the movie progresses and we see other people clearly doing transfers into new bodies, they all seem to pop up very quickly, without any fuss. One supposes that it just gets easier the more times you transfer your consciousness into a totally new body…

FINAL SPOILERS: There’s an even more egregious mistake here. The basic premise is that Ben Kingsley’s mind is now inside Ryan Reynolds’ body. But we never get a real sense of the older man inhabiting a younger body, or of the very real differences that would exist between the two personalities. Ryan Reynolds’ performance is the same when he plays his character as Damian or as the Marine. If you take a moment to try to unravel the story logic there, this becomes impossible on its face. The only conclusion we can draw is that the filmmakers were less interested in the story being told than they were in the opportunity to stage several action beats within this premise. Which means that what we have here is a lot of sound and fury, ultimately signifying nothing.

Self/Less has been released simultaneously on Blu-ray and standard definition as of November 10th. The Blu-ray edition has the movie itself in high definition, along with the director’s commentary and about 15 minutes of featurettes.

Self/Less is presented in a 1080p AVC 2.35:1 transfer (@ an average 34 mbps) that works well to present the New Orleans locations and environments in fairly satisfying detail. There’s a fairly wide variety of flesh tones on display here, and a range of locations from Damian’s ultra-expensive townhouse to some fairly grungy stopovers along the way. In terms of the picture quality, this is a fine piece of work.

Self/Less is presented in an English DTS-HD Master Audio 5.1 mix in English (@ an average 3.7 mbps). Most of the mix lives in the front channels, but the various action moments bring some of the material into the surrounds. The subwoofer goes active as needed for club music or for the big booms, but on the audio side of things, this is a more cerebral affair.

The Blu-ray presentation of Self/Less comes with a few bonus materials – just a commentary and a few quick featurettes. Most of this material is available on the DVD edition as well. The only exception is one of the featurettes.

Feature Commentary with Director Tarsem Singh (AVAILABLE BOTH ON DVD AND BLU-RAY) – This scene-specific commentary is provided by director Tarsem Singh, who mostly just talks about the production details. He admits that there was some post production discussion about how to resolve the confusion over Reynolds’ character at different times, but it doesn’t sound like he ever found an adequate solution. He also notes that he was unable to get Ben Kingsley at the time he had preferred for shooting, and one result is that they really didn’t find much in the way of common character signatures to put between Kingsley and Reynolds. (All they could do is one moment of throwing keys into a chair)

Inside Self/Less (6:37, 1080p) (AVAILABLE BOTH ON DVD AND BLU-RAY) – This is a basic featurette on the making of the movie, including interviews with the writers, with director Tarsem Singh and with Ryan Reynolds. It’s essentially the usual mutual compliments society.

On the Run: The Action of Self/Less (6:46, 1080p) (EXCLUSIVE TO BLU-RAY) – This featurette covers the real meat of the movie – the various action sequences. A few soundbites about the approach are intercut with some on-set video of the scenes being staged, and with the requisite clips from the movie.

Shedding (2:27, 1080p) (AVAILABLE BOTH ON DVD AND BLU-RAY) – This is essentially the movie’s trailer, intercut with a few soundbites about the concept of moving someone’s consciousness from one body to another. There’s no way that this could even be introduced in 2 minutes, let alone discussed.

Previews – There’s a Blu-ray menu option that allows the viewer to access several current Universal trailers from the internet. It essentially repeats what happens when the disc is first activated and the online trailers run. This is also similar to what is on the DVD, except that the DVD’s trailers are baked onto the disc. The ones here will change over time.

Digital Copy – Instructions are included in the packaging for downloading a digital copy of the movie to your laptop or portable device.

Self/Less unfortunately squanders an interesting premise on a fairly routine series of action sequences. Some interesting cast members are left in the wake, including Ben Kingsley and Matthew Goode. The Blu-ray gives this movie a solid high definition presentation, and throws in a few bonus features. But the underlying film isn’t enough to justify a purchase. Fans of Ryan Reynolds may want to rent this if they’re curious. Fans of Ben Kingsley have already seen much of his footage in the trailer.