John Frankenheimer’s Seconds is more thoughtful than most psychological thrillers, but it nevertheless manages to keep the viewer off kilter and scrambling (just like its protagonist) until its big payoff. Disgustingly ignored and underrated at the time of its release, the film is so innovative in its storytelling, its photography, and its editing that it easily stands the test of time emerging now as a classic of its kind: a kind of supersized Twilight Zone-style drama that works from beginning to end. 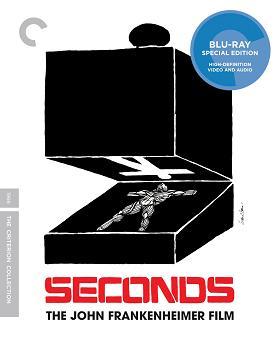 Frustrated by his passionless, sterile existence, New York banker Arthur Hamilton (John Randolph) gets word from Charlie Evans (Murray Hamilton), his former doubles partner whom he thought had died, that there is a company that can give him a new life, Desperate for a change, Arthur tentatively reaches out to get more information and is swept up in their promises of a second chance at happiness so that he undergoes the extensive operation for a new face, voice, and fingerprints and begins life anew as Malibu-based painter Tony Wilson (Rock Hudson). Unsure at first about his new lifestyle, he’s aided in his adjustment by a beachcomber (who’s actually an employee of the company) Nora Marcus (Salome Jens), and as she falls in love with him, Tony seems to slowly be settling into the rhythms of his new persona. But memories of his former existence keep creeping into his consciousness, and that unstoppable desire to figure out where he went wrong the first time so he can make his second chance count finally gets the best of him.The last word in mid-life crisis morality plays, Seconds is a filmmaker’s dream project, and director John Frankenheimer and the script by Lewis John Carlino adapted from the book by David Ely is the perfect marriage of source material and filmmaker. Frankenheimer’s direction, James Wong Howe’s cinematography (who keeps the camera pushed up into the faces of the actors during a vast majority of the film: very unsettling), and Ferris Webster and David Newhouse’s editing combine to impart mood and tempo about as well as any movie ever made: from Hamilton’s early restlessness and dissatisfaction with his life through the somber period of adjustment to his situation, his eventual giving in to his new persona (during a memorable bacchanal sequence), and the drunken spree at a party when Tony can’t stop the memories from spilling from his lips, the film’s true turning point. Howe’s camerawork uses a variety of lenses and in-camera effects to display Tony’s unsettled and unbalanced situation (from the distorted set while he’s under the influence of drugs early on through one sequence after another as events contribute to his eventual epiphany but at a great cost). Frankenheimer handles crowd scenes (like the grape stomping orgy or the house party) with equal dexterity to his one-on-one scenes (Hamilton with the grandfatherly company head played by Will Geer or scenes with Tony and Nora or Tony with his valet played by Wesley Addy, another company employee).This is unquestionably Rock Hudson’s greatest performance. The first moment as he glances at his “new” face while a single tear trickles down his cheek shows us the commitment the actor has made to the material, and his ups and downs as his makes his unsteady journey through this new life toward a realization of what he had and gave away are never less than riveting. Salome Jens has some good moments as the girl who’s losing her heart to him only to become impatient with his resistance to change. Will Geer is the very embodiment of cunning evil: a smiling, sweet-natured exterior hiding a monstrously conniving interior, and Jeff Corey as his second in command is no less commanding. John Randolph is fully convincing as the middle-aged businessman tired of his passionless existence, and Frances Reid as his wife fully reflects those same feelings of unhappy resignation. Murray Hamilton’s surprise revelations near film’s end provide an ominous introduction to the film’s horrifying conclusion, and Richard Anderson as the surgeon has effective scenes at the beginning and end.

The film has been framed at Frankenheimer’s preferred aspect ratio of 1.75:1 and is presented in 1080p using the AVC codec. It’s a reference transfer in that the film represents exactly the way the filmmakers wanted it to look: sharp when sharpness was required; soft when it fit the mood, a crisp grayscale with terrific black levels and excellent shadow detail at the right moments and blooming whites when they were needed. The grain structure present gives the transfer a very film-like look. The film has been divided into 14 chapters.

The PCM 1.0 (1.1 Mbps) sound mix is very effective. Much of the movie dialogue was post-synched so the arid quality that this often generates is certainly present here. But there are no age-related artifacts like hiss or crackle, pops or flutter to mar the listening experience, and Jerry Goldsmith’s superb score comes through especially well.

Audio Commentary: Recorded in 1997, director John Frankenheimer makes astute observations about the making of the production and its disappointing reception. There are notable silent patches throughout, however.Alec Baldwin Interview (14:21, HD): the actor talks about his experiences of working with the director and offers his own critique of the movie, one of his favorites.A Second Look (18:37, HD); Frankenheimer’s widow Evans and actress Salome Jens offer separate reminiscences about the film edited together into a single interview featurette.Palmer and Pomerance on Seconds (12:38, HD): film historians Barton Palmer and Murray Pomerance offer a critical essay on the film using stills and film clips to make their points.John Frankenheimer Interview (10:26, HD): a 1971 interview for Canadian television finds the director discussing his approach to filmmaking and mentioning some of his more famous films including The Manchurian Candidate, Seconds, and The Train as well as his years doing live television.Hollywood on the Hudson (4:18, HD): a 1965 WNBC interview with Rock Hudson on location shooting scenes for Seconds.18-Page Booklet: contains the cast and crew lists, some stills and behind-the-scenes photographs of the movie, and film critic David Sterritt’s analysis of the film and its place within the filmography of John Frankenheimer.Timeline: can be pulled up from the menu or by pushing the red button on the remote. It shows you your progress on the disc, the title of the chapter you’re now in, and index markers for the commentary that goes along with the film, all of which can be switched on the fly. Additionally, two other buttons on the remote can place or remove bookmarks if you decide to stop viewing before reaching the end of the film or want to mark specific places for later reference.

Seconds is one of the great psychological thrillers from the 1960s. It takes its time establishing its themes while setting up its horrifying climax, and the Criterion Blu-ray is the film’s best representation ever on home video. Highly recommended!

Fantastic. A very special film. I know I saw it when it was released, and then not again for at least a couple of decades, but I never forgot its impact.

Nice review once again! I've always wanted to see this one, I look forward to the next Criterion sale so I can pick this up!

One of Frankenheimer’s best films and Matt is right about being Rock Hudson's best performance. Now to see "The Train" on blu-ray one day soon.

A little bit of amusing irony in that RIchard Anderson is in this movie in a role where his whole job is basically to say to his superiors, "Gentlemen, we can rebuild him."

It's too bad the scene of Hudson visiting his daughter that was cut (and who was played by Frankenheimer's wife Evans Evans) remains lost.

Cool, this is on my must have list! And I'm happy to buy it even if the Barnes and Noble 50% off sale is over upon release date. I'm really curious to see the new supplements and interviews. And I wonder if the Frankenheimer audio commentary is the same that was on the MGM laserdisc then later ported to the DVD. I can't imagine Criterion being allowed to use the MGM commentary.The B&W photography is top notch!

MGM? I thought it was a Paramount film.

You are right Matt. I just took a quick look at the old DVD specs on line and I thought it was distributed by MGM.
You must log in or register to reply here.