The search for Shangri-La has been the subject of many films, before and since the release of Search for Paradise(1957), the 4th Cinerama feature film. Like the other Cinerama travelogues, this film is a wonderful time capsule of the sights of Central Asia as it appeared in 1957, from the Kingdom of Hunza in Northern Pakistan to Nepal as Lowell Thomas takes viewers on an excursion through the Himalayas and the Karakoram Mountains of Central Asia. 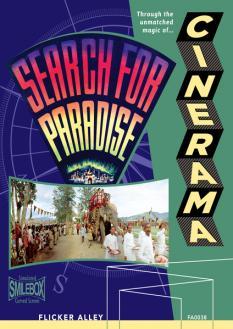 Producer and narrator Lowell Thomas takes viewers on an adventure around the world to explore the Himalayas and Central Asia in this travelogue film that was the fourth feature film produced by the creators of Cinerama, after This Is Cinerama(1952), Cinerama Holiday(1955), and Seven Wonders of the World(1956). The journey begins in the Forbidden Kingdom of Hunza, and includes excursions on the Indus River through India and Pakistan, the Shalimar Gardens in the Vale of Kashmir, and the coronation of King Mahendra of Nepal. As in other Cinerama films, the spectacle of speed is presented in sequences featuring a jeep speeding along a mountain road, birds-eye view of the rapids on the Indus River, and U.S. Air Force jets and bombers returning to their base. The footage obtained for these films did not come without risk, as one crew member, James Parker, lost his life on the Indus River and another person was killed by an elephant during the making of this film.Search For Paradise is presented in a 1.85:1 aspect ratio in the Smilebox format, which recreates the appearance of a Cinerama presentation on a flat screen by having the far side panels of the screen elongated to simulate the curved appearance of the 2.59:1 aspect ration on a 146° screen. The producers of this restoration have excelled themselves again in making this presentation look as great as it does now given their source materials and limited budget. The original negatives suffered from vinegar syndrome, missing film footage missing from the original negative , and a variety of other issues that made a full restoration almost impossible.Search For Paradise, like Seven Wonders of the World being released at the same time, is up to the same high standard as the earlier Cinerama films released in HD over the last few years. The Cinerama travelogues are wonderful time capsules of the world as it appeared during the production of these films. The producers of these films really went all out on these roadshow productions. The theme song for this film is sung by Metropolitan Opera star Robert Merrill, and the film has an original score by Dimitri Tiomkin(High Noon, The Guns of Navarone).

Search For Paradise is presented in a 1.85:1 aspect ratio in the Smilebox format, which recreates the appearance of a Cinerama presentation on a flat screen by having the far side panels of the screen elongated to simulate the curved appearance of the 2.59:1 aspect ration on a 146° screen.The join lines between the 3 panels are almost invisible. The restoration feature in the special features demonstrates the extraordinary efforts taken to blend and minimize the meeting points of the panels. Shadow detail and fine detail are excellent. As with the other Cinerama films, grain is non-existent, since the larger 6 perf panels (as opposed to ordinary 4 perf) were never grainy in theatrical presentations owing to their size and format. It is extraordinary how colors were restored and boosted to Eastmancolor footage that had turned a uniform pink tinge, as demonstrated in the special feature "Restoration Demonstration."

The English Dolby Digital 5.1 audio is excellent, and created directly from the original 7 channel mix. The audio is primarily narration, sound effects, and music score with fine dynamic range and no audible hissing or popping. The packaging describes the audio as 5.1 STS-HD Master but it is actually Dolby Digital 5.1 with an option for Dolby Digital Stereo. There is not much in the way of directional audio but I infer that this was the case in its theatrical presentation.

Trailer(4:35)(HD): This is a special trailer prepared for the restoration of this film.1950s B&W Announcement Trailer for Boyd Theater(3:52)(SD): This black and white 1:33.1 trailer consists of artwork promoting the film and states the film is "Now Showing" at the Boyd Theater in Philadelphia.Search For Paradise Breakdown reel(14:23)(SD): This is the original interstitial footage that was projected in the theater anytime there was a breakdown in any one of the three projectors. It consists of Lowell Thomas explaining the technical challenges during a presentation breakdown and interviewing composer Dimitri Tiomkin regarding his contributions to the film.1956 B&W Behind the Scenes - Air Force Base(6:54)(SD): This is footage shot behind the scenes by the U.S. Air Force during production of the film.16mm Behind the Scenes - On Location in Nepal(2:58)(SD): Lowell Thomas narrates this footage that is reminiscent of the film but for the aspect ratio of 1:33.1.Restoration Demonstration of Search For Paradise(13:40)(HD): Restoration director David Strohmaier and others discuss the source materials and demonstrate the scanning of the original 3 panels of footage and remastering in restoring the film. Restoration of Search For Paradise required insertion of footage lost from the original negatives by use of deposit prints held by the Library of Congress. Vinegar syndrome and severe color fading of the original Eastmancolor were also problems that had to be resolved. This feature is recommended viewing so that one can appreciate the efforts involved in restoring this film."In The Picture" 3 Panel Cinerama Short(2012)(31:46)(HD): David Strohmaier produced and directed this excellent modern Cinerama travelogue, done in the style of Cinerama Holiday(1955), and exploring the sights of Los Angeles."The Last Days of Cinerama" Behind the Scenes(24:39)(HD): This documentary discusses the decline of Cinerama in the late 1950s and its resurrection in this century with behind the scenes footage of production of In The Picture(2012).Interview With Otto Lang(24:00)(SD): The director of Search for Paradise is interviewed in 1997 in this footage obtained for the production of the documentary Cinerama Adventure."Searching For Paradise" Presentation With David Coles(22:39)(HD): This consists of still photos with narration by David Coles in a presentation entitled "Cinema in Shangri-La" given in April 2014 at the Bradford International Film Festival Widescreen Weekend. Cinerama aficionado John H. Mitchell is highlighted with photos of his backyard setup in Sydney, Australia, where he screens his own print of Search For Paradise and other Cinerama titles.Behind the Scenes Slideshow(4:36)(HD): This is a presentation of stills of photographs taken during production of the film.Also included is a handsome 28 page replica booklet of the original souvenir program for Search For Paradise.

Search For Paradise on Blu-ray/DVD Combo is another terrific Cinerama travelogue that has been restored at long last. The audio and video presentations are exceptional, especially given the state of the original negatives and the fact that they were not stored properly for years. The special features are very highly recommended, particularly the Restoration Demonstration which explains the miracles wrought by Cinerama, Inc. and Image Trends in reassembling the roadshow presentation of Search For Paradise into this Blu-ray/DVD Combo.Also recommended is the new Cinerama film short "In The Picture" which would be a worthwhile purchase even if sold separately rather than included as a special feature in this release. Search For Paradise is highly recommended, as are all of the other 5 Cinerama films released on Blu-ray by Flicker Alley, including Seven Wonders of the World(1956), released on Blu-ray and DVD at the same time as this film.

Thanks Tim for the review, these 2 films were real ball busters.

boy it must have been a long weekend for you doing both these shows!

Strohmaier said:
Thanks Tim for the review, these 2 films were real ball busters.

boy it must have been a long weekend for you doing both these shows!
Click to expand...

Yes, but it was an enjoyable one with these 2 films and the terrific special features.
C

For those Cinerama fans who do not know, much of the Indus river footage was actually filmed in the Grand Canyon in the U.S.A.

The original film had pre-screen Overture, Intermission and exit music. Are these included on the new dvd?

Joe Caps said:
The original film had pre-screen Overture, Intermission and exit music. Are these included on the new dvd?
Click to expand...

Yes, this is the full roadshow presentation.