Director-cinematographer Roel Reiné has become Fox’s go-to guy for a series of made-for-home video action films. Seal Team Eight: Behind Enemy Lines is a video war game brought to the screen. As for story quality or in-depth characterizations by its actors, well, there isn’t much here to offer. But if it’s wall-to-wall firepower, explosions, fights, and attacks you’re looking for, it’s all here in a tidy, expendable package, and the Blu-ray edition, now presented for review, offers the definitive home video version of this movie. 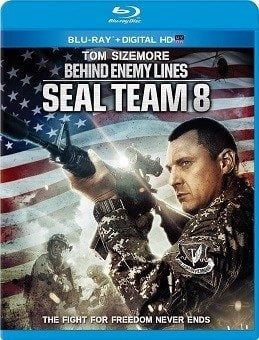 SEAL team commander Ricks (Tom Sizemore) sends his squad of five men into the Congo to rescue a CIA asset Zoe Jelani (Aurélie Meriel) who has valuable information on a mysterious terrorist leader named Mellon who’s mining uranium in the African interior to use in nuclear warheads. Leader of the squadron Case (Lex Shrapnel) and his team must survive retaliation from African warlord Ntonga (Leroy Gopal), an attack on the river by his troops, and a complete lack of drone or land support as they wind their way closer to the hideout of their target.The script by Brendan Cowles and Shane Kuhn spends actually no time allowing the viewer to get to know the individual members of the team up front; thus our rooting interest in their success or in their survival is lessened because of a lack of emotional investment in these characters. The script writers and director Roel Reiné stumble very badly in trying to set-up a major surprise as to the identity of the enigmatic Mellon when the game is frankly given away within the film’s first twenty minutes with the eventual revelation of the sinister mastermind a decided anticlimax. Reiné serves as his own director of photography, and his working speed is infamous within the industry. Nevertheless, the staging and shooting of the action scenes is sometimes sloppy and frequently nonsensical (where, for example, is the angry mob who pursued our hero Chase through the streets and shops of Johannesburg making it a complete war zone as he made his way to the final, inevitable showdown with his nemesis?) though admittedly some stunts and attack set pieces do gain one’s attention with their sheer size and impact. He does demonstrate an overly familiar motif of showing action in bursts of slow motion-then-speed up that becomes clichéd, but he does manage to cram a great deal of action within a small amount of time.Tom Sizemore has top billing, but he remains in the command post and only occasionally appears to comment or show exasperation on the success or failure of various operational maneuvers. Lex Shrapnel is the de facto star of the film as the team commander Case. He disguises his British accent very well (the entire SEAL team appears to be British judging from interviews in the bonus section) and handles the action scenes with grit and determination. A misguided and quite unnecessary love scene thrown into the film with leading lady Aurélie Meriel who plays the insider Zoe does neither of the actors any favors though she handles her weapons and displays some fighting skills fairly nimbly. Anthony Oseyemi who plays Case’s second-in-command Jay also handles the action stuff handily and also disguises his natural speaking voice expertly. The others in the team (who get picked off one-by-one as the film runs) are Michael Everson, Darron Meyer, and Colin Moss.

The film has been framed for home video at 1.78:1 and is presented in 1080p resolution using the AVC codec. Compared to the DVD initially submitted for review, the video quality of the Blu-ray is much more solid and definitely the way to go if one is into this kind of budget action film. All of the problems with the tight line structures and minutely detailed jungle foliage which had led to numerous artifacts such as aliasing, line twitter, and moiré patterns on the DVD are completely resolved by the increase in resolution. Sharpness is outstanding, and color has been somewhat desaturated to give the film a grittier feel (the director mentions Black Hawk Down and Platoon as inspirations, so the look of the film is no surprise.) Black levels can be inky but are not always as deep as one might wish. Shadow detail is improved from the DVD release. The film has been divided into 28 chapters.

The DTS-HD Master Audio 5.1 sound mix offers a completely satisfying sound experience in all available channels when the attacks occur (which are pretty much 90% of the movie). Panning effects across and through the soundstage are frequent, and Mark Kilian’s incessant rap/percussive score fills the available channels. The LFE channel gets a thorough workout from the innumerable explosions and heavy artillery on display. Despite the huge levels of noise, dialogue is always discernible and has been placed in the center channel.

Audio Commentary: director Roel Reiné goes solo on the track enthusiastically describing his work process, his inspirations, and his pride in the finished product.The Ultimate Mission (10:35, HD): director Roel Reiné, actors Lex Shrapnel, Leroy Gopal, Darron Meyer, Colin Moss, Anthony Oseyemi, and stunt coordinator Leroy Gregg give brief interviews about the making of the film.Surviving the Shoot (5:27, HD): director Roel Reiné, actor Lex Shrapnel, and stunt coordinator Leroy Gregg discuss the shooting of the street ambush in Johannesburg.Master of Chaos (5:30, HD): the cast marvels at the insane work ethic of director-cinematogpher Roel Reiné who is known for doing more than one hundred set-ups in a single day. Reiné also comments on how having three additional cameras rolling during action scenes allows for a much more accelerated pace for filming.Promo Trailers (HD): The Counselor, Robocop, In the Name of the King 3, 12 Rounds 2, The Marine 3.Ultraviolet: code sheet enclosed in the case.

For teenaged boys (or anyone) who want an ADD-afflicted action film, easily viewed and easily disposable, Seal Team Eight: Behind Enemy Lines will clearly fill the bill. The script comes a cropper trying to provide even rudimentary surprises or brief segues from the combat that don’t ring true, but there’s no shortage of action or noise in this made-for-home video enterprise, and the Blu-ray version of the film offers superb video and audio encodes as compensations.