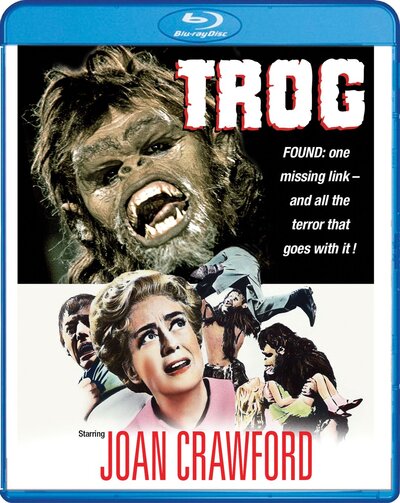 Trog is short for a prehistoric part man, part monster cave dweller known as the troglodyte. To a determined anthropologist (Crawford), he's the scientific discovery of the age. To others, he's walking death after local resident Sam Murdock (Michael Gough) prods the brute into a blind rampage.

This was Crawford’s final film in her career after recently starring in several other horror films such as Strait-jacket and I Saw What You Did.
Extras to be announced on a later date. Pre-order now @ https://www.shoutfactory.com/product/trog?product_id=7728

Excited about this. I know TROG isn't great art, but it's fun, and I'm always happy to have more Joan Crawford on Blu-ray. Plus, there's John Hamill, who provides a bit of eye candy.

Wasn't this movie riffed on MST3K?

No but I've always assumed that's only because it either was cost-prohibitive or too obvious of a choice.

TravisR said:
No but I've always assumed that's only because it either was cost-prohibitive or too obvious of a choice.
Click to expand...

A turkey like this one would have easily been an episode, but since WB released it wasn't public domain like practically all the films they show are.
You must log in or register to reply here.