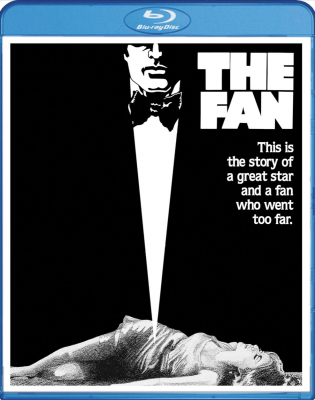 The underrated 1981 NYC-based slasher film is coming to Blu-ray for the first time! Slated for release on November 19th.

Based on the best-selling novel by Bob Randall, Hollywood legend Lauren Bacall (The Big Sleep) and Michael Biehn (The Terminator) tear up the screen in this edge-of-your-seat thriller. Sally Ross (Bacall) is a renowned Broadway star, glamorous celebrity, and the object of adoration of countless admirers. But among all the loving little people lurks a young man (Biehn) whose devotion teeters on the edge of madness. His impassioned letters to her are initially a source of pleasure, but as he attempts to realize his ultimate fantasy – and is met with rejection – the stakes are raised to terrifying heights … which might bring on the final curtain for Sally. Co-stars include Maureen Stapleton (Reds) and James Garner (The Rockford Files).

The film also had some rich pedigree behind the scenes: It was produced by Robert Stigwood (Grease), directed by Edward Bianchi (Deadwood), edited by Oscar-Winner Alan Heim (All That Jazz), shot by cinematographer Dick Bush (Sorcerer, Crimes of Passion) and scored by legendary genre composer Pino Donaggio (Dressed to Kill, Carrie, The Howling).

Extras to be announced on a later date, but we can confirm today that we have a new interview with “The Fan” himself, Michael Biehn! Pre-order now @ https://www.shoutfactory.com/product/the-fan?product_id=7232

Definitely underrated. I have always found this movie tense and engrossing.

"Hearts, not Diamonds!"
Reactions: Powell&Pressburger, Will Krupp and TravisR
B

There was a lengthy interview with him in The Hollywood Reporter last week talking about his career, and this movie was meant to be his breakout role. When box-office returns were lukewarm, his career didn't get the jump start it was expected he would receive. It took The Terminator to put him on the map (though still not in elevated superstar status). He doesn't actually seem to have been interested in that kind of stardom.
Reactions: B-ROLL, Powell&Pressburger and Will Krupp