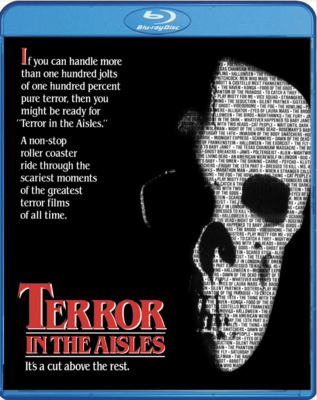 TERROR IN THE AISLES - The fan-favorite 1984 theatrically-released compilation film featuring some of some of the greatest horror hits of all time – is finally getting its own standalone Blu-ray release before this Halloween on October 13th!

A roller coaster ride through the most terrifying moments from over 70 of Hollywood’s greatest chillers. Donald Pleasence (Halloween, Halloween II) and Nancy Allen (Dressed to Kill) are the hosts of this blood-curdling journey through a collection of horror classics like Psycho, Jaws, Poltergeist, Alien, The Bride Of Frankenstein, The Exorcist and The Texas Chain Saw Massacre. It also features many thrillers released on Blu-ray recently under the Scream Factory brand including The Fog, The Thing, The Omen, Invasion of the Body Snatchers (1978), The Howling, Cat People, Carrie, Bug, Vice Squad and The Seduction.

Extras are in progress (and we do have some great ones lined up) and will be announced on a later date. Pre-order now @ https://www.shoutfactory.com/product/terror-in-the-aisles…

I remember seeing this multiple times on TV back in the mid-80's and I loved it. Seeing it again when Halloween II came out on Universal's Blu-ray, it's just a bunch of clips and nothing special but nostalgia will make me buy it (again).

This was first included as one of special features on Universal's Halloween 2 30th Anniversary edition back in 2011.
Reactions: TravisR

I first encountered this movie when it showed on the now defunct Chiller TV channel back in the late 2000's; I hope this release has both the theatrical and TV versions of the movie.

A kind of That's Entertainment! for the horror/sci-fi genres, it's a fun watch but having seen it a few times, I'm not sure I ever need to see it again.

I was REALLY surprised to find that no service offers this to stream/rent or buy, and it's not available to check out in the 85 branch Chicago Public Library!

EricSchulz said:
I was REALLY surprised to find that no service offers this to stream/rent or buy, and it's not available to check out in the 85 branch Chicago Public Library!
Click to expand...

If the library has Universal's/the first release of Halloween II (1981) on Blu-ray, Terror is on there as a special feature.

TravisR said:
If the library has Universal's/the first release of Halloween II (1981) on Blu-ray, Terror is on there as a special feature.

Here's Amazon's listing for it (it's currently $11):
Amazon product
Click to expand...