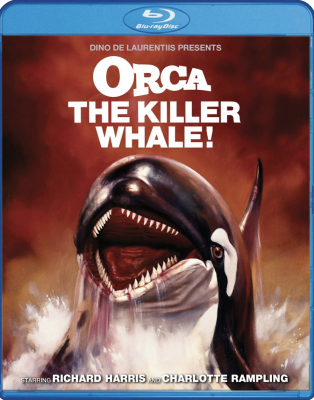 Swim for your life this Summer as ORCA comes hunting on Blu-ray for the first time in North America!

Sleek, intelligent, beautiful ... and hell-bent on revenge. Producer Dino De Laurentiis (King Kong, Ragtime) and director Michael Anderson (Around The World In 80 Days, Logan's Run) join forces to present the rousing action-adventure tale of ORCA. It's the story of one powerful being against another: a strong, determined fisherman (Richard Harris,Unforgiven) versus an equally determined killer whale. When the giant whale's pregnant mate is maimed and killed by Harris, the whale seeks vengeance: smashing boats, attacking a seacoast village, and eventually luring his human adversaries to a final confrontation in the marine creature's own arctic turf. Charlotte Rampling, Will Sampson, and Bo Derek (in her feature film debut) also star in this seafaring epic brimming with nail-biting suspense and spectacular special effects.

Street date: 6/30/2020. Extras are in progress and will be announced on a later date. There's a reverse cover with alternate theatrical art too! Pre-order links coming soon on shoutfactory.com and other fine online retailers.

Oh, yes. I remember seeing this when it first came out and thinking it was better than Jaws. This is the film that first brought home to me that Charlotte Rampling is/was a strong screen presence. I wouldn't mind seeing this film again.

Robin9 said:
Oh, yes. I remember seeing this when it first came out and thinking it was better than Jaws. This is the film that first brought home to me that Charlotte Rampling is/was a strong screen presence. I wouldn't mind seeing this film again.
Click to expand...

The one thing I remember about this movie is what happened to Bo Derek.

I had to chime in as Randy texted me that this was coming. Never got the comparisons to Jaws. Although, I love Jaws I always found Orca just a bit more moody and dark. Just YT the Orca main theme by Morricone and prepare for chills.

Only thing I’m not crazy about is that cover. Looks like a cross between Free Willy and Shaft!

Orca is one of the better Jaws ripoffs but nowhere near that classic. Not in the same pond. Not even in the same ocean!

Tino said:
Orca is one of the better Jaws ripoffs but nowhere near that classic. Not in the same pond. Not even in the same ocean!
Click to expand...

Agreed on which is the better film but ripoff is a bit harsh the films are different animals. Pardon the pun. Apples and Oranges. Orca owes far more to Moby Dick. Orca did cash in on the success of Jaws with a killer animal but it was far from the 1st film to do it. . A true Jaws ripoff would be something like Great White or Grizzly that used the same premise, characters and basic story as Jaws.

Jaws "borrows" a fair amount from Moby Dick, as well, especially in the finale of the Benchley book. So I always cringe a bit when people label some other story as a Jaws ripoff when that story itself is not wholly original.

Sub the white shark for the white whale, which destroys Quint's/Ahab's boat, and Quint/Ahab drowns (in Benchley's book) after becoming entangled in the lines of the harpoons that Quint/Ahab has launched at the shark/whale in an attempt to kill the creature while endangering others and resulting in collateral deaths of crew on the boats.

If anything, Jaws: The Revenge copied this!

If anything, Jaws: The Revenge copied this!
Click to expand...

Revenge is about Ellen getting revenge on the shark for what it did to her son not the shark getting revenge. The only time any shark got "revenge" was in the 3 when it was looking for it's baby.
You must log in or register to reply here.

Saturday at 3:38 AM
Ronald Epstein

Saturday at 3:45 AM
Ronald Epstein