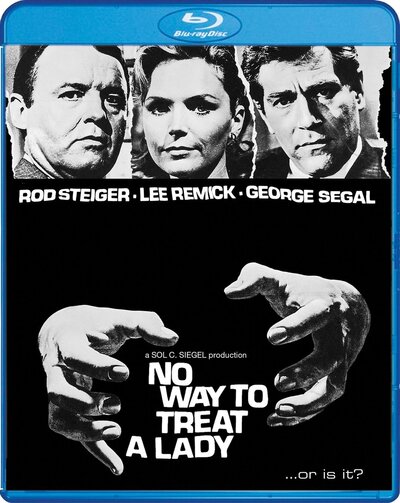 The 1968 offbeat & suspenseful cat and mouse thriller NO WAY TO TREAT A LADY is making its Blu-ray debut in North America on Dec 21st!

Suspense master William Goldman (Marathon Man) wrote the novel from which this bizarre black comedy was adapted. It's the extraordinary account of a plumber who kills a dowdy matron, a priest who kills a dowdy matron, and a policeman who kills a dowdy matron. Actually, they are all the same man, a psychotic master of disguise brilliantly played by versatile Rod Steiger (In The Heat Of The Night). The killer also gets his kicks phoning in clues to detective Morris Brummel (George Segal, The St. Valentine’s Day Massacre). All of New York trembles as a sixth strangling is reported in the papers. And the man with the makeup kit stalks another victim ... the detective's girlfriend (Lee Remick, The Omen).

Extras to be announced on a later date. Pre-order now @ https://www.shoutfactory.com/.../no-way-to-treat-a-lady...

Don't think I've seen this since the late 80s. I know William Goldman thought the film was miscast, that the leads should have traded parts, but it worked for me. I picked up a copy of the score on vinyl recently (still in the shrinkwrap!) and have been trying to figure out whether I should ebay it or save for when I get a record player again.

A great movie. This is one I got on Imprint and that transfer is terrific - this is probably the same, since there's no other info about anything else, transfer-wise.
You must log in or register to reply here.