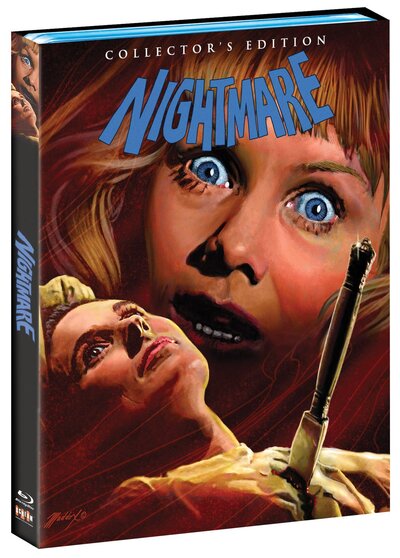 We've cooked up some more Hammer for the holidays! NIGHTMARE is coming to Blu-ray for the first time in North America on March 15th!
As a child, Janet (Jennie Linden, Old Dracula) witnessed an unbearable horror – her insane mother stabbing her father to death. Now a young woman, Janet suffers from recurring nightmares that have her convinced that she’ll follow her mother to the asylum. Accompanied by her schoolteacher, Miss Lewis (Brenda Bruce, Peeping Tom), Janet retreats to the home of her guardian (David Knight, The Devil’s Agent), who has hired lovely Grace (Moira Redmond, A Shot In The Dark) as a companion to help calm his troubled ward. But Janet’s nightly terrors, magnified by the eerie, creaky old house, bring all her fears chillingly to life. Are Janet’s problems all in her head … or is there a sinister force at work?

Directed by the undeniable visual genius that is Freddie Francis, NIGHTMARE is sure to keep you wondering when you'll ever sleep again!
*Extras to be announced at a later date*

Pre-order your copy of this creepy chiller today from our site and receive an 18” X 24” rolled poster of the cover artwork while supplies last: https://www.shoutfactory.com/.../nightmare-collector-s...