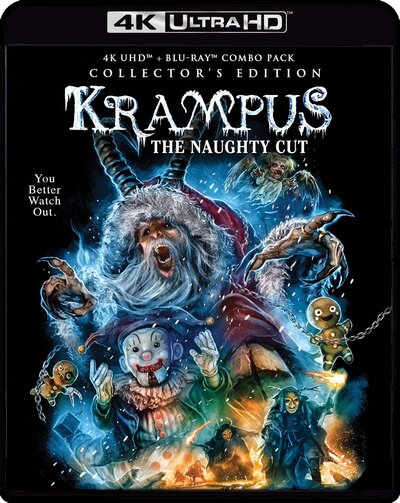 We’re celebrating Christmas a little early with our special announcement of Director Michael Dougherty’s holiday horror hit KRAMPUS: THE NAUGHTY CUT—coming soon from us on 4K UHD & Blu-ray. Here are the early details we have currently:
• National street date for North America (Region A) is Nov 16th.
• This will be presented as a Collector’s Edition and will come guaranteed with a slipcover in its first three months of release.
• For the first time ever Michael’s Dougherty’s previously unseen “Naughty Cut” of the film will be seeing the light of day! This alternate version restores key dialogue and scenes that had to be trimmed from the original theatrical release to appease the MPAA. Supervised by filmmaker Michael Dougherty, this is the definitive version of the holiday cult classic!
• The original theatrical cut of the film will not be presented on our release.
• The Director-approved illustrated artwork pictured comes to us from artist Devon Whitehead. This art will be front-facing, and the reverse side of the wrap will feature the original theatrical artwork.
• Full list of final extras will be announced on a later date. Expect a lot!
Pre-orders on our site begin today which includes the Blu-ray plus a rolled 18” x 24” poster of the new art. The poster is exclusive to us and will be made at a limited run of 700 pieces: https://www.shoutfactory.com/.../krampus-the-naughty-cut...