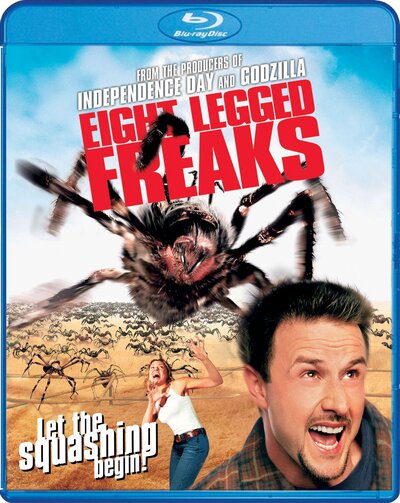 Look what’s crawling onto Blu-ray this Summer: Giant spiders go on a rampage in EIGHT LEGGED FREAKS –arriving on Blu-ray for the first time in North America on July 20th!
What do you get when you cross a toxic waste with a bunch of exotic spiders? Eaten! The townies of Prosperity, Arizona, will all become a screaming smorgasbord if mutated arachnids as big as SUVs have their way in this comedy/horror crowd pleaser whose creators include the producers of Independence Day and Godzilla. Spiders that leap like gazelles, web-spitting spiders, spiders that suck your insides out as if through a straw – they’re all among the behemoths conjured up by an inventive effects team.
David Arquette (Scream) heads the two-legged stars, mobilizing the citizenry in a last-ditch fight to survive. Here’s hoping they succeed. Otherwise, Prosperity – maybe the world – could be reduced to one giant, uh, website!
Extras to be announced on a later date. Pre-order now @ https://bit.ly/3g2qqzV

I don't know that I need to own it but I remember this being a silly, fun movie.

Yay! One of my most wanted on blu! Love this film. I watch my DVD at least once a year, and it looks pretty good but I've wanted this on blu-ray for ages.

I usually explain it as being a comedy/horror similar to Gremlins, but with spiders. Many of the spiders have a personality and their vocalizations (yes, some of these spiders can make sounds) are hilarious, IMO (and remind me of gremlins giggling).