Three iconic horror superstars in the same film: Vincent Price, Christopher Lee, and Peter Cushing? It sounds like a fanboy’s dream come true, doesn’t it, and yet it didn’t really come true for fans when Gordon Hessler’s Scream and Scream Again premiered only to find Cushing in one scene and Price and Lee limited to about three scenes apiece with one together. It’s a strange hybrid of a movie – part sci-fi, part horror thriller, part political exposé which is probably the main reason why it gained a cult following. Its very oddness is its peculiar charm, and repeated viewings do show there to be method to the madness of the filmmakers in fashioning this weirdly appealing if unquestionably flawed little shocker. 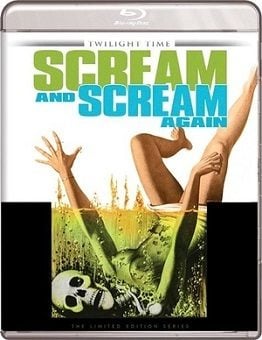 When a series of young girls are found with their heads bashed in, their necks crushed, and their blood drained from puncture marks on their wrists, Detective Superintendent Bellaver (Alfred Marks) is determined to get to the bottom of the mystery. Using a police decoy (Judy Huxtable) to lure the young man (Michael Gothard) in from a disco, the young man proves to be something of a psychotic superman with enormous strength who can throw policemen around as if they weighed nothing and actually kill with one blow. He’s pursued to an outbuilding belonging to a scientist Dr. Browning (Vincent Price) who pretends ignorance when questioned but who’s actually building a cadre of super humans made from assorted body parts of superlative physical specimens he and his cohorts abduct. A neo-fascist organization has plans to first take over central Europe and then the world with this new “master race,” but after the evil Konratz (Marshall Jones) murders the then head of the organization (Peter Cushing) so he can take over, he has his own plans for moving forward with the master plan.

Screenwriter Christopher Wicking doesn’t make things easy for the audience by plotting about five different scenarios while waiting an egregiously lengthy amount of time to tie them all together: a champion runner confined to a bed awakens periodically to find another body part missing, a martinet sporting a uniform with a swastika-like emblem and with a Vulcan-like nerve-pinch-of-death puts the squeeze on his enemies, a young hipster seduces women and then bashes them to death which draws in the police to investigate, a scientist and his nurse (Uta Levka) make plans for a new experiment, a young assistant medical examiner (Christopher Matthews) takes up the investigation for the police into the shady practices of Dr. Browning. Inevitably the plot strands do link together (albeit somewhat tenuously and with a definitely enigmatic ending), but first timers may give up trying to connect the dots before Wicking does it for them. Director Gordon Hessler stages a very impressive car chase sequence with the police on the tail of the fleeing “vampire” (the bloodsucking is really the only thing that connects Michael Gothard’s character to a vampire; he has no trouble with daylight and can’t turn into a bat), and that is followed by an equally well staged face-off in a granite quarry where Gothard’s character seems to be walking straight up the vertical side of a quarry wall. The political ramifications of the storytelling are the film’s greatest weakness and aren’t really exploited well enough to make the twist ending have much impact, and those expecting the three horror greats to have a memorable meet-and-greet on the screen are bound to be disappointed. Even the Price-Lee confrontation at the end isn’t really much to write home about.

Though each of the three top-billed stars (Price, Lee, Cushing) brings his considerable professionalism to his individual scenes, none of them really is a standout in the film (Price comes the closest, but then he has the largest part of the three). That honor dually goes to two of the lesser known actors: Alfred Marks as the forceful and authoritative Superintendent Bellaver and Christopher Matthews as the young medical examiner Dr. David Sorel. Both actors draw considerable attention by their dedication to these traditionally stereotypical characters and perform admirably. Michael Gothard only has a few lines, but he makes a most creepy psychopath and even with no special effects to speak of is rather convincing as a six-million dollar man-gone-wrong.

Among all of the Twilight Time releases that I’ve reviewed, the picture quality of this Blu-ray ranks as one of the weakest in the series (the fault, of course, is with MGM's lackluster work). The theatrical 1.85:1 aspect ratio is faithfully rendered in 1080p using the AVC codec, and color saturation levels are rich and rewarding. Sharpness is generally fine though there are long shots that seem a bit soft, and there are a couple of shots where the focus puller was obviously a little asleep at the switch. Black levels are all over the place: occasionally deep but oftentimes milky and indistinct. But the chief problem with the transfer is a general lack of clean-up afforded the transfer with assorted dust specks pretty much a full-time occupant of the frame, some occasional debris and damage present, and even the ignominy of reel change markers which have not been removed. The movie has been divided into 24 chapters.

The DTS-HD Master Audio 1.0 sound mix seems to be a completely accurate representation of a typical mono soundtrack of the period. Dialogue has been well recorded (and occasional looping is smoothly realized), and the atmospheric sound effects and David Whitaker’s music score have been blended with the speech most effectively. No age-related artifacts like hiss or crackle mar the aural experience.

Audio Commentary: film historians David Del Valle and Tim Sullivan effusively dissect the film occasionally stumbling over one another to get his own thoughts and opinions on the record. Still, for providing the original plot from the Peter Saxon novel so that we can easily see how things were switched up for the film, the commentary serves a very valuable service.

Gentleman Gothic (23:21, HD): an interesting documentary on the films produced and/or directed at American International Pictures by Gordon Hessler including The Oblong Box, Scream and Scream Again, Cry of the Banshee, and Murder in the Rue Morgue. Among the film historians weighing in on Hessler’s time at the studio are Steve Haberman and Jeff Burr.

Uta Levka Interview (8:43, SD): the German-speaking actress (subtitles are used) recounts her memories of working on the picture and her opinions of Vincent Price (very positive) and Christopher Lee (not especially pleasant).

Scream and Scream Again, another cult film for horror aficionados, comes to high definition home video courtesy of Twilight Time. Though the video quality is a bit lacking, the extras are a nice surprise and worth investigating especially for fans of the movie. There are only 3,000 copies of this Blu-ray available. Those interested should go to www.screenarchives.com to see if product is still in stock. Information about the movie can also be found via their website at www.twilighttimemovies.com or via Facebook at www.facebook.com/twilighttimemovies.

A potential blind buy I hadn't really decided to follow through on. But your review intrigued me. I guess I'll bite. I know I'll be giving the commentary a pass, however, as I really dislike David Del Valle's commentaries.
You must log in or register to reply here.