A brain trust made up of hyper-geniuses solving complex emergency scenarios in and around Los Angeles gives CBS’ first season hit drama Scorpion its unique place among the network’s long array of hit procedurals. Based on a real life person (who serves as one of the show’s writers and producers), the series is more like a collection of weekly mini-movies with its momentous amounts of action and human drama, and only the formulaic qualities of the set-up repeated episode after episode prevent the series from scaling even greater heights of achievement. 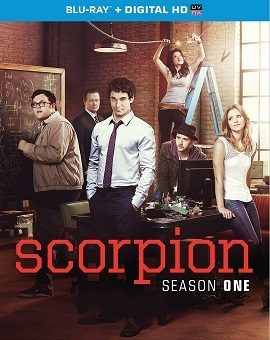 With a measured I.Q. of 197, Walter O'Brien (Elyes Gabel) finds working with machines based in mathematics and science easy but dealing with regular human beings nearly impossible. He’s cobbled together a ragtag squad of fellow geniuses they’ve named Scorpion who can solve complex problems but have largely lacked for work because of their inability to deal with the common man. On board are fellow geniuses Toby Curtis (Eddie Kaye Thomas), a psychiatrist with gambling addiction issues, Happy Quinn (Jadyn Wong), a mechanical expert who can fix just about anything, and Sylvester Dodd (Ari Stidham), a human calculator with multi phobias. When an agent for Homeland Security Cabe Gallo (Robert Patrick), who had worked successfully with Walter as a teen but had become estranged from him when a mission went wrong, decides to give Walter’s company another chance working for the government, he realizes that he needs a liaison between the brainiacs and the rest of the world, so struggling single mom Paige Dineen (Katharine McPhee) who has her own struggles with her genius son Ralph (Riley B. Smith) is selected. Together the team manages to make a name for itself solving a series of mind-boggling problems as they finally begin to taste the admiration (rather than the ridicule) of others and begin to grow psychologically when they let barriers down and begin to explore human emotions.

The great appeal of the series is watching these unique individuals begin to connect to the outside world on an emotional rather than an intellectual level. In doing that, the geniuses take a great interest in young nine-year old Ralph since his precociousness reminds them of themselves when they were children, and they’re determined to make his childhood one of acceptance and admiration rather than one of scorn and ignominy. They also begin to explore feelings of growing attraction, made convenient since various members of the team or their immediate families show interest in one another: Happy and Toby, Sylvester with Walter’s stricken-with-MS sister Megan (Camille Guaty), and Walter and Paige (though inconveniently, Paige’s long gone husband Drew - Brendan Hines – appears now out of nowhere to reclaim his abandoned family). The scenarios dreamed up for the team to solve grow increasingly in danger and complexity, and the action scenes accumulate so much that one begins to see the shows as mini-­Bourne Identity scenarios rather than as regular installments of episodic television. During the first season, the team must deal with a faulty air traffic controller program, a defective nuclear reactor, a rogue former member of Scorpion set on revenge, a rockslide trapping a child in a sinkhole at Venice Beach, a brain-damaged former secret service agent with information to prevent a nuclear meltdown, a peace summit about to be attacked leading to World War III, and nerve gas about to be spread by a crazed hacker. There is no question that the thrill quotient and suspense levels of each episode ratchet to the max each time out, but the formula of nearly every episode containing countdowns to disaster and the morphing of Walter into an action hero with no prior military or athletic training does seem a little preposterous.

The producers scored a real coup in casting Elyes Gabel as Walter O’Brien, a charismatic British actor who has a rock solid American accent and quite believably portrays one of the world’s smartest humans. He has instant chemistry with all of his fellow actors particularly bonding with Riley B. Smith’s Ralph, and the close if often abrasive give and take with Robert Patrick’s flinty but caring Cabe Gallo really makes the series work. The other actors portraying geniuses all equally convince as their hyper-smart characters and find appealing nuances (Ari Stidham’s sweetness amid his OCD and other phobias, Eddie Kaye Thomas’s sly wit and dry delivery, Jadyn Wong’s appealing combination of toughness and tenderness). Katharine McPhee’s rather bland presence actually fits the situation here better than in her previous series Smash where everyone was working overtime attempting to convince the viewer she was something distinctive. David Fabrizio has a tiresome role of spoiler as a government official too old school to readily accept Scorpion’s unique way of solving problems, always barking threats about firing the squad and showing no confidence in their abilities despite their sterling track record.

Here are the twenty-two episodes contained on five Blu-ray discs contained in the first season set. The names in parentheses refer to the participants in that episode’s audio commentary:

Presented in 1080i on CBS, these 1.78:1 television widescreen transfers are presented in 1080p resolution using the AVC codec, a definite upgrade to broadcast quality in solidity and consistency. Sharpness is exceptional throughout, and color values are spot-on with realistic skin tones. Contrast is effectively and consistently applied making for a movie-like appearance with each episode, and black levels are very impressive. Only some slight line twitter on a couple of occasions mar otherwise impeccable video quality.

Broadcast television doesn’t get much better than the audio mixes for this action series presented here in DTS-HD Master Audio 5.1 (a Dolby Digital 2.0 stereo surround track is also provided). Music by Brian Tyler and Tony Morales gets impressive spread through the front and rear channels. Dialogue has been well recorded and has been placed in the center channel. Atmospheric effects get the split surround treatment with impressive pans through the soundstage during high speed chases, and fairly frequent explosions really rock the LFE channel.

Audio Commentaries: two commentaries are available for listening (see above episode list), but neither is very effective. Both suffer from too many participants in the room and too much inside humor which doesn’t translate into much of interest for the casual viewer.

Deleted Scenes (HD): seven scenes are scattered across the five Blu-ray discs attached to the episodes from which they were excised.

Building Team Scorpion (14:28, HD): the real Walter O’Brien along with producers Nick Santora, Nicholas Wootton, and Alex Kurtzman discuss the genesis of the series and then discuss the casting of the principals and the making of the pilot with soundbites from actors Elyes Gabel, Katharine McPhee, Ari Stidham, Eddie Kaye Thomas, and Robert Patrick.

Chasing the Plane (5:16, HD): how the climactic scene in the pilot episode was staged is discussed by producers Nick Santora, Nicholas Wootton, and Alex Kurtzman, the show’s special effects coordinators, and actors Elyes Gabel and Katharine McPhee.

Launch Promos (5:25, HD): five promos are arranged in a montage.

Living on the Edge (2:18, HD): a behind-the-scenes look at the staging of the rescue stunt from the season-ending “Postcards from the Edge.” Commenting are Robert Patrick, Elyes Gabel, and Ari Stidham.

Unlikely Heroes: The Making of Scorpion-Season 1 (19:59, HD): a nice season overview of the most spectacular episodes featuring the real Walter O’Brien along with producers Roberto Orci, Alex Kurtzman, Nicholas Wootton, and Nick Santora.

Meet Team Scorpion (14:31, HD): each of the main cast members introduce themselves and describe their characters on the series. Then producers Alex Kurtzman, Roberto Orci, and Nick Santora describe the chemistry present with the actors making the team so believable.

Inside the Brain with Eddie Kaye Thomas (0:55/ 4:12, HD); the actor introduces this interactive feature where six aspects of brain functions are attributed to various members of the squad. The choices for the viewer involve logic, addiction, fear, compassion, protection, and mechanical ability.

Stunts on Scorpion (10:32, HD): stunt coordinator Jim Vickers describes his favorite stunts accomplished during the season with plenty of film clips to display his choices.

Cast “Thank You” (0:25, HD): the cast individually expresses thanks for the loyal audience for the show’s first season.

Scorpion may stretch the bounds of imagination a bit for the sake of dramatic intensity, but the show does offer intriguing action and lots of suspense for the viewer willing to give it a try. Kudos to CBS/Paramount for releasing this movie-like series on Blu-ray offering the best possible picture and sound for fans of the show. Recommended!