Michael Winner’s Scorpio was but one of a multitude of espionage thrillers produced during the late 1960s and 1970s with plots and atmosphere that emphasized the nihilistic and dead-end nature of the spy game, a direct contrast to the more glamorous, upbeat adventures of the still potent James Bond thrillers. Scorpio is a middling effort with appealing actors and a good central idea not really fleshed out adequately or tied up with satisfying denouements and lumbered somewhat by eccentric direction. Still, it’s an imminently watchable film, and in the new high definition transfer offered in Twilight Time’s Blu-ray release, a case can be made for its worthiness of garnering a second look. 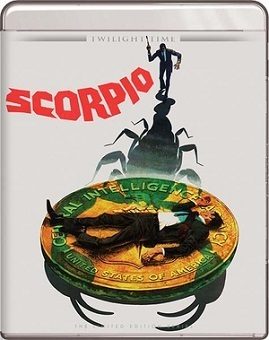 Convinced that his longtime secret operative Cross (Burt Lancaster) has become a double agent without the knowledge or permission of the CIA, bureau chief McLeod (John Colicos) orders hitman Jean 'Scorpio' Laurier (Alain Delon) to assassinate him. Cross’ many years of experience have alerted him there might be a target on his back, and so he makes a break from Washington, D.C., and heads to Vienna where an old friend from pre-war days and now a Russian KGB agent Zharkov (Paul Scofield) may be able to shelter him for a few days while Cross works on getting his wife Sarah (Joanne Linville) out of the United States.

The screenplay by David W. Rintels and Gerald Wilson never makes it clear if Cross is really a double agent or is simply being rubbed out because the CIA thinks he knows too much about their shady operations, and the climactic twist in the film comes out of nowhere and has been poorly established and even more irritatingly unexplained. Throughout the film, however, the agency comes off looking not only inept but tremendously crooked with a rancid array of sneaky, sometimes cookie-cutter looking young agents willing to obey execution orders on the slimmest of evidence. (On the basis of the more recent Bourne films, things don’t seem to have changed much in the CIA.) While director Michael Winner relies as always on his overuse of close-ups and zooms at unnecessary moments while sometimes cutting away from action that the viewer needs to see, he does handle some of the film’s action moments with a sure hand and with the ability to sustain lengthy, tense sequences without their running out of steam. That includes the opening assassination of a Middle Eastern diplomat (surprisingly handled with more style than one might expect with a mixture of real-life shooting and television news reportage), an interview on the down low between Cross and Scorpio in a huge public conservatory shot in near darkness but nevertheless exciting, and, most importantly, in the cat and mouse chase sequence in a multi-tiered construction site in Vienna (though why all of shooting didn’t draw the attention of anyone is one of those uses of dramatic license that mediocre filmmakers often resort to).

Having performed together in The Leopard, Burt Lancaster and Alain Delon have an enjoyably good rapport both as friends and as nemeses, and the film affords Lancaster additional opportunities to show his athleticism despite advancing age (he was fifty-eight when the film was shot). Lancaster also performs with ease with Paul Scofield (whom he had worked with earlier in The Train) though the latter’s role doesn’t really make the most of his talents as an actor, and it’s a decidedly small part compared to the other two stars. John Colicos makes a wonderfully hissible villainous CIA head attended by his flunkies played with oily competence by J.D. Cannon, James Sikking, and William Smithers, among others. Both of the principal ladies in the cast ­­­– Joanne Linville as Cross’ wife and Gayle Hunnicutt as Scorpio’s lover – get to have bed scenes with their respective co-stars though the scenes do seem to have been inserted merely for their change of pace from the usual walking and talking dialogue scenes and not because the information revealed couldn’t have been handled in other ways.

The film’s 1.85:1 theatrical aspect ratio has been faithfully delivered in this 1080p transfer using the AVC codec. While there are a few shots that are wonky and seem overly processed (likely the original photography and not an error in making this transfer), most of the imagery is wonderfully sharp and detailed with plenty of fine detail in faces, hair, and clothes to be observed. Color is strong as well with realistic skin tones. Black levels aren’t the deepest possible, heavy grain comes and goes, and there are a few dust specks here and there that don’t intrude on the viewing experience. The film has been divided into 24 chapters.

The DTS-HD Master Audio 1.0 sound mix seems very era-appropriate with not a lot of bass in the mix and an occasional bit of distortion when the higher ends of the music reach levels of volume that seem a bit brittle. Dialogue is always discernible and has been mixed well with Jerry Fielding’s colorful background score and the sporadic atmospheric effects which are present. No age-related problems with hiss or crackle are apparent.

Six-Page Booklet: contains a selection of tinted stills, original poster art on the back cover, and film historian Julie Kirgo’s playful appraisal of the movie.

Scorpio is certainly not a great film and for many it’s not even a good film, but it has its moments that make it worth seeing even if one doesn’t wish to own a copy. For those who do, there are only 3,000 copies of this Blu-ray available. Those interested should go to www.screenarchives.com to see if product is still in stock. Information about the movie can also be found via their website at www.twilighttimemovies.com or via Facebook at www.facebook.com/twilighttimemovies.

This was a blind buy for me and I enjoyed it quite a bit. Its flaws, imo, were mostly directorial (poor looping and some poorly directed supporting performances) abetted by some occasionally bad dialogue. But the plotting was quite good, I thought. I was shocked at the commentary stating they did not really understand the film's plot and that it didn't really make sense. I thought it was all perfectly clear, up to and including the climactic scene. How they could not understand the reason for what transpired between Delon and Hunnicutt baffles me.

I loved that
you thought you were watching Lancaster (and Linville) through a preconceived lens of hero/innocent, only to find that Colicos was right all along and they WERE double agents. Suddenly their dialogue early in the film takes on an all-new meaning: "Why don't we just leave like the others do?"

And of course Scorpio is going to kill his "girlfriend" when he finds out she was a Czech agent double-dealing with Lancaster. I see no reason for confusion at all.


I agree that it's a middling effort, but one that I enjoyed, particularly the lead 3 performances and the location filming.

Thanks for the review. I enjoy this film and think it's one of Michael Winner's better efforts. I'm not sure I'll buy this disc as I don't watch the film very often and the DVD is more than acceptable.

Robin9 said:
Thanks for the review. I enjoy this film and think it's one of Michael Winner's better efforts. I'm not sure I'll buy this disc as I don't watch the film very often and the DVD is more than acceptable.
Click to expand...

Your comment about Michael Winner made me laugh. If you reconsider it will be in the next sale!
N

Keith Cobby said:
Your comment about Michael Winner made me laugh. If you reconsider it will be in the next sale!
Click to expand...

The best comment about Michael Winner was a review of one of his films, I think "Death Wish II", where the reviewer called the movie "another loser from Winner".

I watched it this evening, and after a few false starts and with several pauses and rewinds (disclaimer: I don't usually indulge myself like that on a first viewing), I found myself really liking it -- perceived flaws or weaknesses and all. Very glad to have it, and I look forward to another viewing having already been through it.

This was a blind buy as part of a Twilight sale and had been sitting on my shelf for a while. Finally cracked it open last night. An interesting example of early 70s cinema, reflecting the cynicism of the period rather well. I'm a big fan of the three lead actors and enjoyed watching them. Picture quality was better than I expected. Not a "great film" but one I'll revisit on occasion. I like to have "period viewing" sessions every once in a while (usually I choose two films from within a 3 year period and do a "double feature") and this one should fit that idea pretty well. I also sometimes like to pair very different films in a double feature--it's what I did last night (the other one was John Wick: Chapter 2). Watching Scorpio after John Wick 2 made for an entertaining bit of contrasting film viewing.

I did buy this disc in one of Screen Archives' sales. High time I watched it again.
You must log in or register to reply here.