Director David Cronenberg has a compelling fascination with the human body, or more specifically, with the function and frailties of various elements of living matter (most impressively realized in his 1986 remake of The Fly.) As such, Scanners, his 1981 breakout, has enjoyed popularity as much for its accomplishment as an engaging sci-fi thriller as its fascinating exploding head sequence (and very impressive make-up effects during the denouement.) Now available in a fine, remastered Blue-ray high definition release under the care and banner of Criterion, Scanners finds itself elevated once again to a rightful place as worth cult, classic film. The new Criterion release boasts excellent audio and video assets, and comes with a solid collection of special features, including the Cronenberg’s first film, Stereo (1969.) 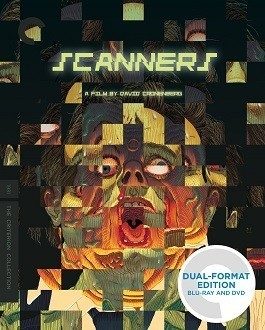 “I would like to scan all of you in this room, one at a time. I must remind you that the scanning experience is usually a painful one... sometimes resulting in nosebleeds, earaches, stomach cramps, nausea. Sometimes other symptoms of a similar nature. There is a doctor present, Dr. Gattineau. I know that you've all been prepared for this, but I thought I'd just remind you just the same. There is one other thing... no one is to leave this room once the demonstration has begun. At this point, I'd like to call for volunteers”

Chased down and apprehended after being surveilled, the homeless Cameron Vale (Stephen Lack) is drugged and taken away. He awakens in a large, dusty building with a strange man (Patrick McGoohan’s Dr. Paul Ruth) standing over him and learns that he was being watched. He is told that he is a rare breed of humans, one of a small number with telepathic abilities. The ability to hear the thoughts of others, and to manipulate subjects, is known as scanning and those with the ability are called scanners. And there is a war being fought.There are two factions at play in the hidden war. Dr. Ruth, working for the ConSec Corporation, seeking to hunt down all scanners and use them to some nefarious end, is fighting against an underground organization of scanners who see themselves as the superior of the species, led by the coolly powerful Darryl Revok (Michael Ironside,) with designs on power.Dr. Ruth has a drug that suppresses the inundation of a Scanner’s brain with the thoughts of others, throttling the power enough to control. Vale is recruited to hunt down Revok for ConSec by Dr. Ruth, but out in the real world, he connects with other scanners who are not a part of the underground and are under ConSec’s radar (including Kim Obrist played by Jennifer O’Neill.) Out here, Vale learns that the situation is far more complicated.David Cronenberg’s distinct and singular vision is imprinted on the core of Scanners though it remains a relatively frayed final product in the talented director’s oeuvre. Gaining almost instant notoriety for the fascinating, and macabre, exploding head sequence (which originally was to open the film,) audiences would find more layers than expected in Cronenberg’s creation. As with most of his films, the ingredients of physical and psychological (though oddly lacking his sexual tones) abilities and eccentricities are mixed with commentary on power, corruption, isolation, and waywardness. All told through his tilted lens (representationally speaking.) Scanners is not Cronenberg’s best work, nor his most grotesque in the effects department, but its success in North America gave him a firmer filmmaker footing in the industry, and was an important announcement to the masses of what this fine director could offer.Films anchored by individuals with special abilities (telekinesis in Carrie, psychic, ESP powers in The Fury) could be considered gateways for Scanners’ birth; the result of an idea Cronenberg has been toying with for several years. But Scanners would enjoy influences from conspiratorial thrillers of the day (including films like The Parallax View) and that makes it both a product of its time (mainstream) and more interesting than the more direct horror narrative Cronenberg has been known for.Scanners was rushed into production to qualify for Canadian tax credits, and with just two weeks for pre-production, the script wasn’t finished before shooting began. Cronenberg reportedly produced new pages before the day’s shoot began, leaving little to no time for the production crew to find suitable locations (let along erect sets.) Still, under such difficult conditions, Cronenberg’s passion for his material and grip on his craft is evident, despite the uneven narrative pacing and too-tightly pack plot ideas within its running time.Performances within the film run the spectrum, with Michael Ironside’s Darryl Revok ranking above them all. Ironside, not particularly large in stature or physically imposing, looms large in every frame. His deep growl of a voice certainly adds to his unassuming menace, but with a concrete power in his expression and confident delivery of dialogue, he is able to flinch from prowl to ferocious with a quick stroke. Stephen Lack’s Cameron Vale isn’t the strongest protagonist, though he plays the arc of his characters discombobulated, then shaky, then in-control scanner with enough curiosity to make it work. Lack’s less formal training as an actor (and by his admission, constant tiredness from lack of downtime) certainly shows. The supporting players of Jennifer O’Neill’s on-the-run scanner Kim Obrist, Patrick McGoohan’s Dr. Paul Ruth, an unlikeable, untrustworthy man, and Lawrence Dane’s neatly-dressed bought-and-paid-for corporate exec Braedon Keller, are suitable in their roles, though McGoohan’s character remains unsatisfying given the towering talent of the man.Scanners enjoys a capable directorial hand authoring the atmospherics and tone, sewing threads of mistrust and paranoia into a general fabric of underhanded corporate oppression and suspect authority figures. A sense of suspicion worn in worried expressions upon Vale’s face, and a genuine sense of chill, can be felt when we consider what the world would be like with people that had the scanner power – and how easily that could be abused. Though there is gore and horror elements (with fantastic make-up and special effects work bringing it to life,) there is more thriller and science-fiction at the heart of Scanners. And it works well.

Scanners arrives on Blu-ray courtesy of Criterion in the “director’s preferred aspect ratio of 1.78:1.” Under the supervision of director Cronenberg, a new digital transfer has been produced in 2K resolution from a 35mm interpositve. Though thousands of instances for dust, debris, scratches and other image blemishes have been removed, though some minor instances can still be seen.The detail level is excellent, paralleled by the saturated colors of warm but strong hues, and pleasing blacks. Some interiors are more muted in color than others, notably the inside of corporate buildings are more drained than the natural tones found in homes and dark alleyways – but this is clearly an aesthetic choice.

Scanners comes with the original monaural soundtrack that has been remastered at 24-bit from the 35mm dialogue/music/effects magnetic track (according to the accompanying booklet.) A faithful audio, full and proceeding with clarity in all ways. Dialogue is especially crisp and Howard Shore’s score, one of many afforded Cronenberg’s films, is unfettered in its discordant and brooding goodness.

Criterion has provided a number of good special features including a terrific new documentary on the film’s special effects, featuring interviews with Cronenberg’s collaborators, offering a look back at the production of Scanners from the special effects team’s perspective. Contributors include Rick Baker (the legend), Gary Zeller (Special Effects Supervisor) and Chris Walas with whom Cronenberg would work to create some of the finest effects on the 1986 remake of The Fly (Walas would later direct the sequel, The Fly II.) Interesting anecdotes from the production of this film as well as technical schooling on the hows and whys round it out.The interview with actor Michael Ironside is equally revealing about the fast-pace of the production and his appreciation of the director and his love of science fiction. This, surprisingly, is the highlight special feature of this release.The Scanners Way (22:57) (HD): Mental Saboteur: New interview with actor Michael Ironside (19:26)The Ephemerol Diaries: 2012 interview with actor and artist Stephen Lack (14:22)Excerpt from 1981 interview with Cronenberg on the CBC’s The Bob McLean Show (11:07)Stereo (1969) (HD): 2K Digital transfer or Cronenberg’s feature film debut. (65:00)Trailer and Radio SpotsBooklet featuring essay by critic Kim Newman.

The room-sized computers, early graphic credits, and dress code date the film heavily, but the idea fervently running amongst the plot layers is as engaging as ever. Just like Cronenberg to take something not entirely original and weave enough of his creative imprint and visceral inclinations to hoist the entire affair. Imperfect though it is, Scanners deserves respect for the strength of its idea and the navigation Cronenberg achieved of the cast and crew through the chaos of a hastened, rewrite laden production.

The trailer really sold this film.

So is the Avco Embassy logo intact on this one?

^ Nope.
You must log in or register to reply here.